Long Afternoon of the World by Graeme Kinross-Smith

Graeme Kinross-Smith, the author of Long Afternoon of the World, is a prolific writer, perhaps best known for his poetry – and it shows. This narrative is infused with the poetry of landscape and the joy of music: ‘Down the rooms of the past I hear music ... Music informs landscapes, the patient streets, the city’s lights spreading across the hills.’ The world of Tim Menzies comes alive on the page, and it is quintessentially Victorian. He recalls the Melbourne of his childhood, ‘shop and vacant block, rare beach, street games, lumbering planes in the sky that sound like the War’; present-day Melbourne, ‘its relentless, tired, opportunist rhythm’, and the family farms in the Mallee and the Wimmera. Most of all, Tim’s mind lingers on the wild coast of western Victoria, where he meditates and writes in an old church. The seascapes, as well as the notion of the healing power of the sea, account for some of the most lyrical passages in Long Afternoon.

Tim is a forty-six-year-old lecturer disillusioned after the failure of his marriage and his estrangement from his children. Now he languishes in his old church by the sea, looking back over the mystery that has haunted his life, the sense that he is not the person he is supposed to be. His memory returns to a violent confrontation between his Aunt Joyce and her husband, David, where reference is made to a secret involving himself. David speaks sneeringly of ‘poor bloody Tim’ and of Tim’s mother: ‘What little secrets has she been hiding?’ ‘Dear little teacher Louise ... Butter wouldn’t melt, would it?’

The narrative takes place in a continuous present of the memory, without sequential order. The process is one of accretion. Tim returns obsessively to certain episodes from his past, often violent, which disturb the introspection, loom large in memory and are repeated with variations. The comparison with painting is irresistible. I think of a vast canvas crowded with disparate figures and incidents, each one vivid and gripping, each returned to and touched up until finally the whole of the family’s and Tim’s past comes into sharp focus against a backdrop of the city, the red dust of the Mallee, the cliffs and sea-pastures of the coast.

Misfortunes have occurred. One uncle became blind at twelve; another, a flautist, had the fingers of his right hand stripped in a chaff-cutter. In Tim’s uncle Des, a blind musician in a Melbourne jazz band, the author has created an unforgettable character. His notes ‘spill out into the hall with the drums and the bass backing them, with the sax looking in here and there ... his fingers skate on the white and cajole the black on the keyboard. The piano can’t live until he touches it.’ A beautiful woman, Betty, mounts the three steps to the stage, whispers to him, gives him a quick kiss, raises him from the stool, leads him down the steps to the open floor, takes him in her arms and they dance. Love and music are intertwining throughout this narrative. But always there is the sense of mystery. Fragments of memory, old photographs and newly discovered letters hint at hidden truths: ‘The questions grow vaster and vaster as they ride above me, like great unreadable dirigibles straining and creasing against the blue, but undeniable, undeniable.’ The mystery will eventually be solved, but to the attentive reader the solution has been fairly obvious.

Two of the author’s known preoccupations – photography and tennis – are reflected throughout. In the cover photograph, taken by the author, the long shadow of a solitary male looms over an unmistakably Australian pastoral scene. Interestingly, the shadow (perhaps it represents memory) is more real, more substantial, than the figure itself.

The cover is most attractive, but one of the complimentary testaments, drawn from the ABR review of an earlier (unnamed) book by Kinross-Smith, creates the impression that it refers to Long Afternoon of the World. Readers might well be mystified and wonder why it is being reviewed again! Meanwhile, photographs are seen throughout the narrative not only as tangible evidence of the past but as objects of mysterious power. An old photograph – black, white, or grey and indistinct – can, in a startling moment, stop time, change time, completely alter a person’s identity. Tennis, described as an ‘oval passion’, runs like a theme through the narrative. Scenes on country courts or at Kooyong are lyrically portrayed, and tennis, suggesting youthful vigour and skill, is more often than not associated with the elusive figure of Alex Cumming, tennis champion and erstwhile friend of Tim’s mother.

Long Afternoon of the World is a passionate story told with great feeling. Moreover, it is a literary tour de force: more than three hundred and fifty pages of sustained introspection in language of the highest poetic order. Is the book too ambitious? Perhaps, but it is beautifully done. Given the personal depth and the detailed evocation of family and location, those who miss the minute declaration on the publications page, that it is ‘a work of fiction’ with all characters and events ‘inventions’, will tend to read it as autobiographical. Those with a short attention span might well find the narrative – Tim watching himself watching himself down ‘time’s slow hall’ – too relentless. Most of us, however, cherish an ambition to read Proust, perhaps in our twilight years when we have the time and wisdom to appreciate remembrances.

Shirley Walker’s most recent publication, The Ghost at the Wedding, won the 2010 Kibble Literary Award and shared the Asher Award (2009). It was shortlisted for the Prime Minister’s Award. 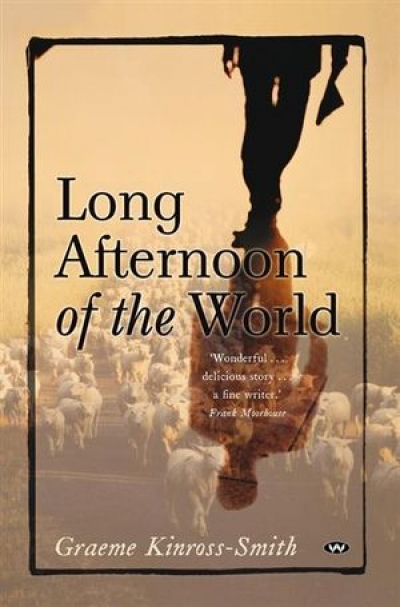 Long Afternoon of the World