Ugh: today I realised Colleen McCullough’s latest book (her fifteenth), Angel Puss, which ABR sent to me several weeks ago, needs to be read, reviewed and dispatched by January 3. The dust jacket précis reveals that this novel is ‘exhilarating’ and ‘takes us back to 1960 and Sydney’s Kings Cross – and the story of a young woman determined to defy convention’. Last week I tried to borrow The Thorn Birds from Glebe Library. Was astonished to discover it was published as long ago as 1977 and sold ten million copies worldwide! I got the 1987 title, The Ladies of Missalonghi (TLOM), instead, it being the shortest of the few books on the shelf. I’ve not read it, either. This evening, after turkey pastizio for dinner (must do that again next year!), I settled down with Angel Puss. I discovered that the young woman is called Harriet Purcell and has curly dark hair and ‘seductive breasts’. On ‘Friday, January 1st, 1960 (New Year’s Day)’ she starts a diary (‘What a good idea this diary is!’ – and that goes for both us). Straight up, she decides to chuck in her handsome fiancé, who has good prospects, because she’s tired of being a virgin and he won’t even kiss her properly. Then she lands herself a job as a senior X-ray technician at Sydney’s Royal Queens Hospital, because she’s a clever lass. At the hospital, she befriends Pappy, who takes her to Kings Cross to meet her awesome landlady, Mrs Delvecchio Schwartz, ‘a good six foot four’, with a face ‘dominated by her eyes, which look straight into [Harriet’s] soul’. Next thing, she shocks her family by moving to the Cross and into the ‘House’ – in which also live Toby the painter, Bob and Jim the lesbians, Klaus the cook and the malevolent Harold. Oh yes, and also Flo, Mrs Delvecchio Schwartz’s mute but prophetic four-year-old daughter who enables her mother to be a reputable crystal-ball gazer. Pappy, it turns out, is a nymphomaniac.

I’m absolutely floored and more than a little worried, with just under half the book to go. It’s proving to be no good at all. It reads like a Mills & Boon, yet it’s published by HarperCollins. Harriet has given her virginity to Dr Duncan Forsythe, the handsome honorary medical officer with the sad eyes. He’s married, but his wife isn’t giving him any. She’s a materialist clothes horse, and Harriet ends up giving her a good telling-off in a scene indescribably absurd. I always thought fiction had to take its bearings from the real world, but perhaps I’m an élitist prig. Does it do any harm that millions of people think the so-called romance novel constitutes fiction? Probably not. What bothers me is that because of McCullough’s reputation as a best-selling novelist this book will attract a great deal of notice that isn’t warranted. And many novels that try a little harder to tell us something authentic about the human condition will be ignored.

I can’t read a book called Angel Puss on the last day of the year (and nor on the first of the new one).

Hoorah, it’s a public holiday. I have a day’s grace. I spend much of it wondering why a person as intelligent as McCullough has written this book. She is a member of various distinguished boards, as well as a Doctor of Letters at Macquarie University. The Internet turns up an article that tells me she is suffering from haemorrhagic macular degeneration, or going blind. This is terribly sad. In the same article, this evidently brave woman jokes that the loss of her sight will turn her ‘from Henry James into T.S. Eliot or something’.

I flick through TLOM. It’s much more convincing, even engaging, with none of the fatuous jocularity that so undermines Angel Puss. I suspect the diary format was a bad choice (and that probably applies to both of us!). To be credible, it requires a great deal more finesse than McCullough gives it here. I’m beginning to think this novel is the worst possible introduction to her work. I quite enjoyed the movie of Tim, her first book — or was that only because of the young Mel Gibson?

What can I say? The eighteen-month time span of this story may have been the undoing of a writer more familiar with the epic. It will surprise no one that Harold and Mrs Delvecchio Schwartz come to a sticky end and that Flo has a bit of a bad time as a consequence. She is rescued by Harriet, who sets all women a good example by having her cake and eating it: two lovers, oodles of cash, and motherhood. The last word belongs to Eliot: ‘Human kind / Cannot bear very much reality.’ 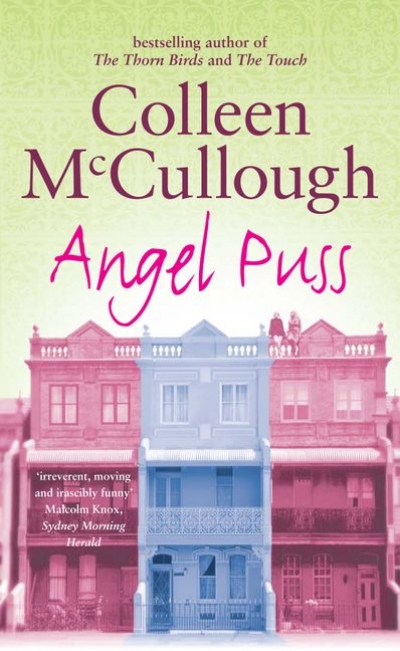