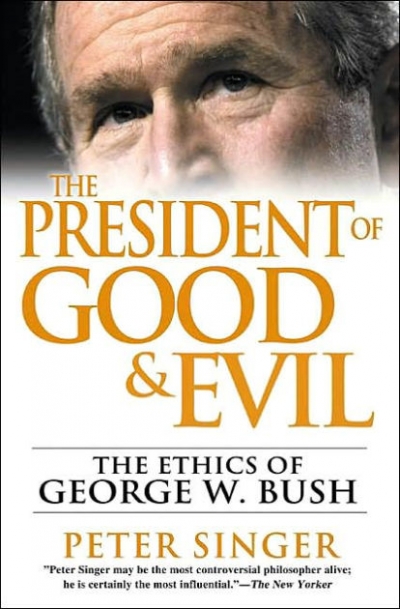 The President of Good & Evil: The ethics of George W. Bush

On the face of it, this book represents a strange project: to elaborate for the reader’s consideration the moral beliefs of a man whom the author judges (and judged in advance, one suspects) to be shallow, inconsistent, lacking moral and intellectual sobriety, and to have failed so often to act on the moral principles he repeatedly professes that he can fairly be accused of hypocrisy. What interest can there be in detailing that over 303 pages? The answer, of course, is that the man in question is George W. Bush – ‘the president of good and evil’, as he is described in the book’s title , because ‘good’ and ‘evil’ are the terms to which he is repeatedly drawn when he moralises about national and international issues.

It comes as no surprise that Singer judges Bush’s ethics to be ‘woefully inadequate’ and the man to be the same. Even so, this book reminds those who already believed it, and it should compel those who don’t, to acknowledge that the reasons for believing it are powerful. Singer makes his case more persuasive by including, unusually for a philosopher, extensive empirical research on matters that range from Bush’s tax policies to the invasion of Iraq. When I finished the book, I was again frightened by the awful meaning of the fact that Bush is the president of the most powerful nation on earth, again anxious about those aspects of America that make that possible and overwhelmed by a sense of the complexity of that extraordinary nation. Singer’s highly qualified acknowledgment that the news is not all bad because Bush has done more about Aids in Africa than his predecessor didn’t diminish any of those responses. Nor, I think, does Singer believe that it comes to much. Disdain for Bush, for his kind of morality and religion, is evident in many passages in what would otherwise seem to be a book striking for its touchingly earnest attempt to take Bush’s beliefs seriously.

The President of Good & Evil: The ethics of George W. Bush