The Lovemakers: Book two: Money and nothing by Alan Wearne

Alan Wearne’s The Lovemakers is a book about overdoing it. Its characters have unwise love affairs, dream foolish dreams, drink too much, engage in criminal activity, amass (and lose) vast wealth, and talk incessantly (usually about themselves). Wearne’s characters usually deal with obsession and with the places you get to in life if you overdo things. Few characters in this second part of Wearne’s epic verse novel age gracefully, and some don’t get to age at all. But The Lovemakers isn’t just about over-doing it: it performs overdoing it. Wearne’s aesthetic is one of excess, of conspicuous idiosyncrasy. Part of its excessiveness and oddity is its oxymoronic status. Wearne’s books are simultaneously poetic and prosy, realistic and outré, stylistically heterogeneous and tonally homogenous.

But I said as much when I reviewed the first part of The Lovemakers (ABR, April 2001). After a gap of three years, the second part, Money and Nothing, has surprisingly been published by ABC Books. (Penguin, which published the first volume, presumably dropped the prize-winning project midway.) Considering both volumes together, it is clear that the most excessive feature of this work is its length. As the second half of a 750-page verse novel (if that’s what it is), The Lovemakers is impressive purely in terms of scale. The numerous characters, events, experiments with rhyme and stanza forms, all illustrate a rare imaginative fecundity and poetic ambition. The Lovemakers is nothing less than a portrait of a generation of Australians, and, in this second half of the work, we move from the late 1970s into the horrible 1980s and beyond.

The Lovemakers is a prolix yet diffuse work. It would be impossible to give a synopsis of the plot (if it has one). There are stories to do with Kim Lacy, the drug dealer and banker manqué; with the 1980s-style entrepreneur Craig Stubbs (for me, the source of one of the book’s longueurs); with Wal, who dies for being gay; with Carrie, the nurse turned sex worker; and with numerous others, whose stories intricately interrelate and ironically comment upon one another. For all the work’s similarity with the Victorian novel (its size, its digressiveness, its concern with the way we live now), it has far less interest in individual heroes and clear narrative lines. It works by accretion and intersection.

The stories in The Lovemakers are as much about milieux as individuals. There are stories about Canberra, a school reunion, a Sydney party, drug running, the business world and the professional sporting world. Wearne isn’t so much interested in the opportunities that multiple narrative perspectives offer (in the way that the modernists were) as with giving a sense of multiplicity and the complex narrative networks that make up generations, society and selfhood.

There are, of course, thematic constants that make these stories more or less cohere. In particular, Wearne, like Freud, is interested in love and work, or more generally the pursuit of happiness. The gay psychologist, Benny, is only one of numerous characters searching for ‘That unending fix, true happiness’, suggesting that happiness and obsession are often interleaved. The stories to do with drug dealing make this explicit. As Kim puts it, if ‘We’re all so wired to get-get-getting’, then ‘Just by wanting it love can be smack’. This in turn suggests that Wearne’s characters will do all sorts of things for both love and money. The emphasis on money and business dealings (criminal, legit, sex work, the media, sport) is present not merely because Wearne’s characters have aged and we’ve reached the entrepreneurial 1980s: it tells us something about the interconnectedness of all those dealings.

These large themes are important, but one of the pleasures of this hefty book is the attention to small things. The Lovemakers is really all detail: references to songs, to places, to the micro-narratives of daily life, to the cumulative circularities of the working mind. Wearne’s attention to his characters’ language has long been commented on, though it is one of Wearne’s mysteries that he manages to give all his speakers a strangely similar tone. He does this through a disjunction of lexis but a conjunction of syntax in the stories. The love of detail in The Lovemakers is also seen in the gnomic touches in its narrators’ observations (‘Part farce / part melodrama, the rich are our mirror’), and in the moments of striking imagery (‘an old grey battleship of / a hang-over blazed home’).

Amid this, there is a sense of life as both chimerical and disconcertingly real in its effects. Sophie Cross, the lawyer romantically involved with Kim who has done away with his business partner, Kevin, thinks this about her situation:

Weren’t certain tracts of life just plain invisible? Oh heaps! As Kevin had ‘vanished’ so she’d never seen any actual ‘dope’ (or whatever it was; for that matter every dollar note she’d earned).

Which gave her a power and yes, to admit it, the creeps.

This is a paradigmatic moment in The Lovemakers, since it is a work that deals with the invisible realities of life, many of which are painful, immoral or dangerous. Love, the book seems to suggest, could be the definitive expression of this, presumably the point of the lawyer being in love with the criminal.

Power, too, comes into it, as it comes into love, and one of the exceptional features of The Lovemakers is its creative power. Part of Wearne’s performance is to show us a novel in what appears to be exclusively poetic forms. Hence the sequences made up of that most intractable of poetic forms, the sestina, Wearne’s use of which is nothing less than amazing. Wearne is also attracted to using rhyme in quatrains and couplets, with sometimes surprisingly complex substitutions and half rhymes, and, as has been the case throughout his career, dramatic monologue. One of the most amusing sequences – which finally sews up the love story of Neil and Barb – has each quatrain ending on the word ‘Tullamarine’.

This is tour de force stuff and suggests that comparisons with nineteenth-century fiction or soap opera or melodrama are missing one of the most obvious points of comparison: light verse, hence the emphasis on technique and rhyme. The Lovemakers is a kind of vers de société taken to the level of high art. Perhaps more telling is a comparison with Byron’s Don Juan. While one would not want to overdo such a comparison, it is useful; though Wearne is no Byron, the use of light verse as a serious form is a significant choice for both writers. In both their works, we find not just complexity and poetic capaciousness but also a kind of mocking seriousness. The juxtaposition of the serious and the comic, and the use of colloquial diction, are clearly related, and one could imagine some of Wearne’s less appealing characters coming up with this moment from Canto VI of Don Juan: ‘So now all things are damned, one feels at ease.’

Like Don Juan, The Lovemakers is both ‘important’ and ‘entertaining’. Its comedy can be savage, its melodrama moving. Once again, if there is anything curiously missing in this vast group portrait, it is children (so central to the emotional and imaginative lives of most people). But Wearne’s narrative is an adult one, and it makes clear that, for all the world is bleak and exploitative, there are adult solaces: love, friendship, poetry.

David McCooey is a prize-winning poet and critic. His latest collection of poems is Star Struck, published by UWA Publishing (2016). Outside (2011), was shortlisted for the Queensland Literary Awards and was a finalist for the 2012 Melbourne Prize for Literature's 'Best Writing Award'. His first collection, Blister Pack (2005), won the Mary Gilmore Award and was shortlisted for four major national literary awards. McCooey is the deputy general editor of the prize-winning Macquarie PEN Anthology of Australian Literature (2009). His album of 'poetry soundtracks', Outside Broadcast, was released in 2013 as a digital download. He is a professor of literature and writing at Deakin University in Geelong, where he lives. His website is: www.davidmccooey.com 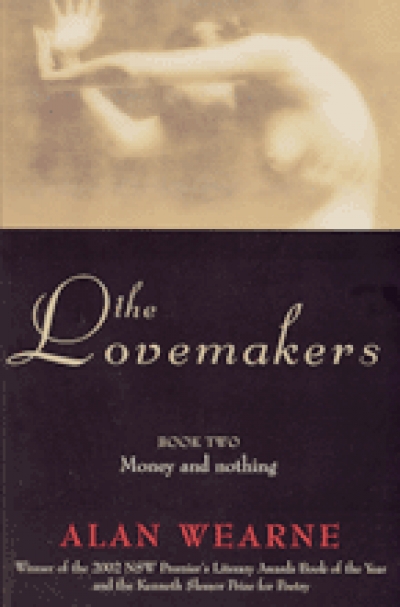 The Lovemakers: Book two: Money and nothing