Hannah Arendt pronounced the Eichmann trial a ‘necessary failure’; it dramatised historical trauma but revealed, fundamentally, a narrative insufficiency. The gap between testimony and history, between jurisprudential protocols and the all-too-human and inhuman complexities of murder, left behind anxieties of incomprehension, reduction, and representational limitation.

The Hamilton Case, Michelle de Kretser’s magnificent second novel, also takes as its philosophical focus this opposition of forms of knowledge, but presumes from the outset that fiction knows more than the law does. Its modes of inquiry – following casuistically the odd detail, the quirky story, the ineluctably precious registers of affect and memory – reveal what in stricter forms is inadmissible. Significantly, the ‘case’ itself is given little narrative space; what preoccupies the author are the lives loosely constellated around its historical moment, and the ramification of themes of witness, judgment, and loss.

The ‘detective’ of the case is one Sam Obeysekere, a Ceylonese lawyer, pompous, self-righteous, and insufferably smug, a mimic-man of the comprador class in whom the Empire fostered obedience founded on culture-envy and denigration of indigenous identifications. Obeysekere is an extraordinary creation: to him the dark-skinned are ‘savage races’; women have ‘primitive minds’; he crassly describes the death of a servant in a well as ‘a welcome bump in the monotonous graph of our routine’. His life is one of stinginess, contempt for others, and the gradual understanding of his own human deficiency. Yet he is not portrayed as cartoonishly evil: rather, one of the exemplary achievements of this text is the illustrative density and circumspection with which he is realised. Sam’s character is utterly plausible as the outcome of the historical and ideological contradictions of British imperialism; and the specificity of his experiences is unerringly compelling. ‘The unbearable thought that everything might have been different’ torments Sam in old age as he looks back on a lonely life lived in pathological self-enclosure.

The crime of the Hamilton case – the murder of a white planter – is one that Sam ‘solves’, somewhat dubiously, by invoking his own genres of prejudice. Ironically, his role in the case stymies his ambition for an appointment to the Bench, since he is deemed to be disloyal to the British (by nominating an English perpetrator) and disfavoured by the rising Sinhalese, since he is seen to have protected the Tamils who were the original suspects. This conundrum neatly encapsulates the shifting political dramas of the island during the pre-independence period: Sam is the dupe of historical forces that no degree of arrogance or wealth can obviate. Corrupted by Anglophilia, demented by misrecognition, de Kretser’s character betokens a wider cultural analysis: Ceylon is represented as a ventriloquist state, populated with figures for whom the ‘bally nonsense’ and ‘whatnots’ of miscommunication signify a country in which, as one character puts it, ‘quotation had become our native mode’. Complicity with Empire is degeneration; Sam is dismantled and punished by his own foreign artifice.

The narrative, it must be added, is not entirely focused on Sam, nor is the Hamilton case the only crime. Infanticide, both actual and metaphorical, is at the basis of a series of repressed or barely acknowledged griefs that deform all the central characters in the text. Maude and Claudia, Sam’s mother and sister, are both wracked by what cannot be acknowledged, and the tragic melancholy of the text settles principally in their stories. The dissolution of Maude – once a promiscuous socialite, fabulously charismatic and hyperbolically sexual – involves some of the most brilliant writing in the book; she begins as a figurehead of hieratic disdain, and ends up isolated, longing for company, and driven to compulsive writing to recover in language the fulsomeness of community. The lyricism of the women’s stories is often extravagantly beautiful; in these sections, de Kretser departs from wry social comedy and charges her text with a kind of yearning delirium of maternity. Against political and public intrigue, then, forms of female suffering are wrought in humid interiors of devastating claustrophobia. Fraying nerves seem to be the author’s specialty: the march of Ceylonese history towards independence is paralleled in allegorical inversion with inner ruination and pervasive eruptions of lunacy.

For all this, the novel is crucially concerned with redemption. There is no epiphanic moment; instead, and more modestly, we are offered an outright assertion that narrative retrospection is one of our means of coping. It was Ricoeur who argued that suffering obliges narration; and it is instructive that Sam is brought to reconsider his past and his function in the Hamilton case by reading a fiction that challenges his own version of events. In a clever demonstration of atonement through narrative reconsideration, the text enters a series of deconstructive manoeuvres that suspend the Hamilton case in unresolvability, but affirm in its place the humane compassion of a minor character who reminds us that generosity in judging others is a form of the invention of love.

In one of those felicitous coincidences of academic life, I was reading Shoshana Felman’s The Juridical Unconscious when de Kretser’s book arrived. In it I discovered a Levinas quote: ‘Must not human beings, who are incomparable, be compared? … But it is always starting from the face, from the responsibility for the other, that justice appears.’ The Hamilton Case is an eloquent, sophisticated, and immensely satisfying work of art. But its chief claim lies in its intelligent consideration of the ethics of judgment, and a process in which (dare I say it?) the serendipitous imaginary recovers the faces that defeat the faceless barbarities of history.

Gail Jonesis the author of two short story collections and five novels, the latest being Five Bells (2011). She has been shortlisted for the Miles Franklin Award three times, and won the Steele Rudd Award and Age Book of the Year Award, among other prizes. She lives in Sydney. Five Bells was reviewed in the February 2011 issue. 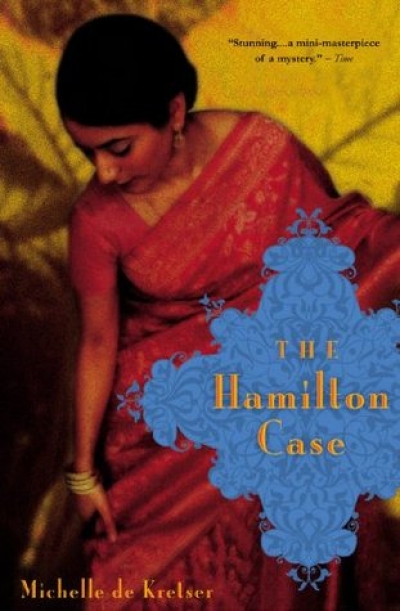