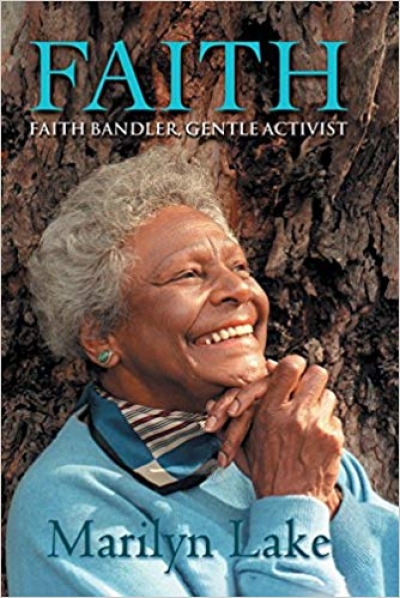 I came to this book after reading Don Watson’s biography of Paul Keating. On the cover of Recollections of a Bleeding Heart, Keating is seen through a window frame, head bent, reading engrossedly, shirt sleeves rolled up – a remote and distant figure. He is seemingly careless of the attention of his photographer, and biographer; a recalcitrant subject.

The contrast with Faith could hardly be starker. On the cover of Marilyn Lake’s biography, Faith Bandler looms large, hands clasped, face alight with laughter and pleasure, in turquoise tones. There is nothing remote about this figure. Faith Bandler wanted an account of her life, and chose Lake as her biographer. This is, Lake tells us, a joint project, the product of frequent discussions between biographer and subject. But why has Lake, Australia’s foremost feminist historian, turned to biography? From the co-authored Creating a Nation (1994) to Getting Equal: The history of Australian feminism (1999), Lake’s work has been directed towards writing women into Australian history. Her signature, as an historian, is a concern with the interaction of masculinity and femininity as a dynamic force in history, and with the way Australian citizenship has always been contested along lines of gender, race and ethnicity. From this, it is apparent why Bandler’s role as an activist and campaigner for indigenous rights interests Lake.

This shift to biography is in some ways brave, for Bandler, like Keating, is a difficult biographical subject. It is not just that she is an unlikely public figure: a politically effective woman in a public culture dominated by men; a political leader outside parliament; a black leader in white Australia; and a highly respected public figure. It is also a difficulty generated by her characterisation as a ‘gentle activist’: a charismatic presence, beguiling and disarming; and a black activist who felt at home in the radical, literary circles of middle-class Sydney. Bandler used the art of gentle persuasion rather than factional alliances and party struggles, and this makes her story very different from those of activists such as Charles Perkins. The title of the book becomes metonymically symbolic of Faith’s character, a celebration of a woman with extraordinary creative and spiritual capacities who campaigned in white gloves and elegant shoes. This is the fabric of the biography, and it remains intact throughout. Who would have thought that Marilyn Lake would characterise a woman as the consummate modern wife, mother and hostess, combining political activism and domestic prowess? Thankfully, Lake offsets this somewhat by including the story of the meticulous arrangements Faith made when she invited the feminist activist Jessie Street to dinner. New yellow curtains were made to match the daffodils on the table; the roast veal dinner was perfect. Street was in fine form, and enjoyed the feast. Nevertheless, she reminded her hostess to conserve her energy for the things that mattered most: her politics and public speaking.