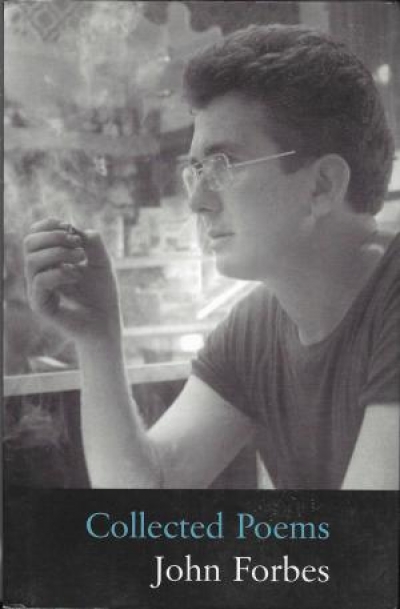 One of the benefits of a Collected is that it places individual poems within the context of the poet’s whole oeuvre, with often dramatic consequences for their interpretation. When Leonie Kramer brought out David Campbell’s Collected Poems in 1989, more than half of the volume was made up of poems written in the last decade of the poet’s life. What one had taken to be the definitive Campbell – the metaphysical ballads and courtly pastoral lyrics – now appeared an innocent prelude to his real achievement, the surreal intensity and urgent compression characteristic of that late outpouring.

In John Forbes’s Collected Poems, it is the early appearance of his ode ‘Goodbye Memory’ that took me by surprise. In his New and Selected Poems (1992), the ode appears quite late, next to the poems of public and personal scorn from The Stunned Mullet (1988). Certainly, its portrait of the poet in all his imagined inadequacy, comic and scathing at the same time, is more like the later Forbes than the earlier, at least as one had thought of him, writing those brilliant, speedy, celebratory poems of the 1970s, such as ‘Ode to Tropical Skiing’ and ‘Rrose Selavy’. In the exquisitely turned bathos of ‘Goodbye Memory’, on the other hand, disappointment in love and the failure of poetic ambition are the primary elements:

Goodbye memory & you my distances
Calling love me across the vast golf course
to the greens whose flags no wind will ever ruffle
Goodbye memory & goodbye
to the sheets held against hot windows
on days when the morning’s blue intensity so crushes me
I breathe with the gasps of a fat sprinter & only
a teenybopper’s crystal sigh answers, so dumbly,
the immense chances the collision of deckchairs
from the briefcase full of words insomnia unpacks endlessly
Goodbye memory …