For those who haven’t yet discovered the riches of New Zealand poetry, this anthology should provide an appetite-whetting introduction. Edited by one of New Zealand’s finest poets, the late Lauris Edmond (1924–2000), it bears the stamp of a thoughtful mind and a judiciously discriminating sensibility, evident in her own work as in her selection from that of others. For she has neither lost her nerve and opted out of inclusion nor claimed any undue space. Yet her own work is central to the nature of the volume. When I came to write this review, after reading steadily from page one to page 257 and closing the covers, I knew that there were certain phrases, images and poems that had struck root, were memorable for me, and were shaping my responsiveness to the volume. Interestingly enough, I didn’t always remember which poet was responsible – for the structure of this anthology (of which more later) is such that it is an anthology of poems first, and poets second.

One memorable phrase I knew to be Edmond’s – ‘I only know that we have come / to quarrelling’ – a phrase from ‘Late Starling’ that epitomises, in the simplest of language, the intertwining of bewilderment and clarity informing those poems about love’s erosion that appear in the section called ‘Time slipped through our fingers’. There was, however, a related poem remembered for the way it refreshed its conventional opening trope of lovers lying ‘in the long grass on the hill’. There are several instances of alfresco lovemaking in the anthology, but these lovers are companionable readers whose enjoyment of spring’s ‘fragile sun’ is shadow-disrupted when ‘the mountain /suddenly reached up and took it. / So early –’. An ordinary enough occurrence: what the lovers cannot know is that

Just so,
in a grass-sweet patch on a little
planet were we spinning minute by
minute out of our brightness and
into the changed, unloving years.

When I went back in pursuit of this poem, I found it was Edmonds again, but that ‘Spring Afternoon, Dunedin’ came from a different section: ‘A straight account is difficult’.

From this, it emerges that Edmonds, faced with the vexing question of how to structure an anthology, has settled for a sophisticated version of the thematic. That is, the determinant is not what is said, but rather the intensity and tonal impulse with which it is said. The type of emotional engagement ranges from the ‘full on’ celebration of section one, ‘This is my voice, saying your name’, through indirection, subversion, disappointment to ‘the limits of distance, disillusionment, loss’ in section five, ‘Our long voyaging’ (each section takes as title a phrase from one of the poems it contains). Edmond’s rationale, presented in the introduction, cannot be easily summarised, but it should be noted that there is room for considerable stylistic variation within each category. The space of section one can encompass the breathless astonishment of ‘Crikey’, the artlessness of ‘I love my mum /forty four million / times around the world’, and the robust sensuality of ‘When the Karaka Trees Whistled and Said to Us: Kia Kaha!’ alongside the grave ceremoniousness of ‘A Woman in Mind’.

There are, inevitably, drawbacks to this structure. As Edmond notes, possibly with some relief, it avoids issues of canonicity and poetic hierarchies, but at the expense of giving any concerted sense of the characteristics and range of individual poets, although it is, of course, possible to collate the poems of any one poet. A warning, though, if you intend to do this: the index to poets and titles is occasionally out by one page. Personally, I would have liked an appendix giving the birth (and death) dates of the poets, which would have gone some way towards providing the historical perspective whose advantages Edmond concedes but discounts. But I know from experience how space oppresses the anthologist, who falls in love with too many poems and finds that publishers limit polygamy.

One advantage of Edmond’s chosen structure is that it accommodates and connects kinds of love beyond the romantic and the sexual. Even the love of animals snuck past Edmond’s guard, with the inimitable ‘Duck’. ‘To Charles Brasch at Sixty’ pays tribute to the long, kind love of friends. Love between parent and child, child and parent, illuminates alike the memory of a mother’s ‘burning grace’ in ‘My Mother Dances’ and a father’s grief for a daughter in ‘Lament’, where all the elaboration of metaphor leads only to the terrible bareness of the final ‘who now lies drowned’.

For the most part, though, these poems are about that common understanding of ‘love’ as the perplexing hunger of the adult heart for attachment over and beyond any simple need for physical pleasure or procreation. They are about the joy of consummated attachment, anger at its denial and anguish at love that cannot be spoken, as in ‘Be Quiet’, where even to speak of love will rupture the amity of the garden. This I take to be one clearly lesbian poem chosen by an editor who found that in many gay love poems ‘too much generalised political fervour [distorted] expression of individual experience’. For it is the individual experience that Edmond privileges, and yet we recognise emergent general patterns: the way that the very need for attachment breeds ambivalent emotions; the uncertainty of whether this will be love till death us do part or whether infidelity, dislike or sheer boredom will intervene; the likelihood that, however good the advice on ‘How to Live Without Love’, it will still be the case that ‘Here We Go Again’.

If I found one striking difference between these New Zealand love poems and the Australian love poems I read while editing The Oxford Book of Australian Love Poems (1993), it was in the very different nature of the contributions made by Maori and Aboriginal poets. The Maori poets, especially Hone Tuwhare, write with such rhetorical and sexual confidence, and show – here at least – little sign of the burden of history that has marked so much Aboriginal writing. I can only offer this as a tentative observation, since I know too little of Maori poetry to be able to gauge how representative a sample is given here.

Not that Lauris Edmond offers to provide a representative sample of any particular group of poets. ‘The poems speak,’ she says, ‘not, as it were, the poets.’ And eloquently, in their diverse tones, the poems do speak. Enjoy them.

Jennifer Strauss is a poet, anthologist, and retired academic. 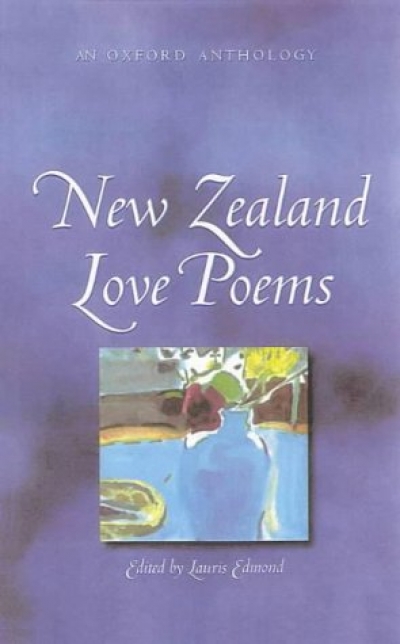