Other People’s Words by Hilary McPhee

‘The characters which survive,’ wrote Hilary McPhee at seventeen in the copy of Thomas Hardy’s The Return of the Native that she studied in her tiny matriculation class at Colac High in 1958, ‘are those who make some compromise with their surroundings.’

Twenty years later and five hundred miles away, I was given a book for my birthday. It was a hardback with a black-and-white photograph on the cover: a barefoot woman riding a bike through what you could somehow tell, maybe from the way the light fell on the cobblestones and on her hat, was a blindingly hot Australian day. The woman was wearing, a flowery, old-fashioned dress whose pattern had been colourised with the same musky, dusky colours of the cover design. McPHEE GRIBBLE, said the book at the base of its spine.

That first edition of Monkey Grip is still in excellent shape. It was and still is one of the most beautiful books I’ve ever seen. The word ‘compromise’ has clearly not been used by anyone at any stage of its production. McPhee, recalling her first reading of Helen Garner’s manuscript in 1976, says ‘… here was an original voice saying something that hadn’t been said before under skies that were familiar from the opening lines …’

With her friend Diana Gribble, McPhee had established the Melbourne publishing company McPhee Gribble the previous year; a decade and a half later, caught up in the relentless advance of globalisation and the wake of the 1987 stock-market crash, the company was finally sold to Penguin Books. For all of the years between, McPhee Gribble had been a name to conjure with: fiercely independent, internationally respected, known for good relationships with their authors and with other publishers, characterised by their commitment to good Australian writing and beautiful books, and, most of all, driven by ideas and ideals. ‘We started out,’ says McPhee, ‘with an ethos rather than a profit-motive, an idea rather than a money-making venture … for most of our fifteen years we had the luxury of a workplace where other priorities ruled … All of us wore old clothes and drove small secondhand cars covered in dents … We earned around a schoolteacher’s wage most of the time. Everything else was re-invested in employing the people we needed in order to publish the books we wanted. It was a way of working as remote now as the moon.’

Other People’s Words is an intensely complex piece of writing showing that social and cultural history, autobiography and memoir really are not separable genres. As an intellectual and professional autobiography, it traces McPhee’s own progress through a liberal education to a life in publishing, but it also demonstrates in the process what sorts of obstacles a woman born in Australia in 1941 could expect to encounter by way of educational and professional training and achievement.

Given the choice, McPhee opted for matric at Colac High rather than at the ‘model school’ Tintern with its emphasis on ‘female subjects’ and its message ‘that marriage was a calling and that education was important in order to be an intelligent partner for your husband’. Her account of school and university life in the 1950s and early 1960s, of the subjects available to students and the emphases and values that were placed on different disciplines and cultures, is one of the few, and certainly one of the best, detailed accounts by an Australian (or indeed any) woman of her intellectual development that I’ve ever read.

McPhee represents her university years as exhilarating, productive, and crowded: by her own account an intellectually restless and demanding student, she also worked and performed at the Union Theatre in student productions; she travelled to the Koonalda Cave on the Nullarbor Plain in a team of assistants to an archaeologist; she and a friend started their own magazine.

And, unintentionally launching the first stage of what was to become her life’s work in the fostering and development of Australian literary culture, she went out one afternoon to an interview for a part-time job, and so began a dream apprenticeship working in the office of Meanjin with its original editor, Clem Christesen: ‘He showed me a Patrick White story, “Down at the Dump”, which had just come in, the first White had sent to the magazine.’

After two years at Meanjin, an Honours year studying Pacific Prehistory, an impossibly romantic boat trip in the best M.F.K. Fisher tradition, and what sounds like an idyllic year on a Greek island, McPhee moved with her first husband to London, where she went to work for a publisher and gave birth to her first child. Unlike many literary expats, and luckily for Australian writers and readers, McPhee and her husband eventually came home to Australia, and she went to work for Penguin Books Australia in Melbourne in 1969.

The story of what happened to her there, no less infuriating for being only briefly and obliquely told on tactful paddy feet, is a classic tale of gifted women in the workplace; it shows the difficulty for women not only of McPhee’s generation but of every generation that has succeeded her so far (much less those that went before) of trying to reconcile public life with private life, emotional commitments with professional goals, and family life with the right to call yourself, and to act like, an effective and autonomous citizen of the world.

The book goes on to tell the story of the McPhee Gribble partnership and the evolution of the company through the late 1970s and early 1980s into an admired and sought-after outfit with ambitions to remain an intensely localised and personalised independent publisher while at the same time valiantly attempting to change long-established patterns of international book distribution, patterns with their roots in Australia’s colonial past and mirrored by the culturally imperialist attitudes of the United States.

There are shapely, scholarly accounts of various stages in postwar Australian literary and cultural history – the ‘creative phase’ in Australian writing that Allen Lane from Penguin saw emerging in 1961; the arguments and observations in Donald Horne’s The Lucky Country; the spread of misleading misrepresentations in the 1980s of Australian culture by non-Australian artists like Werner Herzog and Bruce Chatwin – as well as of more general developments in Australian writing and publishing. These accounts, along with the episodic accounts of McPhee’s own life, provide two kinds of context for the story of McPhee Gribble Publishers; the different sections are arranged to show how inextricable from each other these three strands of narrative really are, and at moments they merge in various snapshots.

There, for instance, is McPhee reading Horne’s ‘ferocious analysis’ in The Lucky Country on a beach on a Greek island in 1964 and ‘being quite sure that Australia was a place I had left for good’. There she is in 1970, in her double role of Penguin Australia employee and the lover of its general manager, playing company hostess to visiting British directors who ‘would pretend with great dignity that they hadn’t met me and discussed new books in the office during the day. I’d light the candles and pass off Fray Bentos steak-and-kidney pies as my own and the next morning would be sent flowers like the good company wife I was after hours’.

Among her many gifts, McPhee is a legendary editor, so it comes as no surprise that this mass of material should have been arranged with such intricate clarity. But what makes this book the same kind of pleasure to read as good novels is the way that she deploys single, sharply focused images as motifs to link up different epochs in her life and different eras of cultural history, motifs positioned in the text both to herald and to echo its central concerns and themes. There’s the inscription in the Hardy novel that becomes a comment on her later life; there are the European immigrant children at primary school in the late 1940s, ‘the boys with their straight backs and red cheeks and the girls in full skirts and wooden clogs’ being encouraged to sing and dance in national dress for their classmates – an image in sharp contrast to the flattening-out of cultural differences that she finds herself fighting against forty years later.

And her image for that erosion of local difference in writing, the effect she fears globalisation has already begun to have on literature, is the glittering annual party thrown by the publishing giant Bertelsmann at the annual Frankfurt Book Fair: ‘And the food tastes of nothing at all.’ The book ends in this minor key, fearing for the future of literature in general and Australian literature in particular. It’s a wonderful book, but it’s not a happy one.

Other People’s Words is a compelling ‘rise and fall’ story. It’s an un-self-centred autobiography, written with great control and clarity, by a writer with an acute awareness of herself and her life as products of her time and place. It’s an indispensable document for anyone interested in Australian literary and cultural history. And its title – coming from one of the country’s great editors – might be an echo of the McPhee Gribble publication Other People’s Children, Helen Garner’s story of the forlorn love we have for children to whom we have no claim, but whom we might still somehow be able to help make their way through the world. 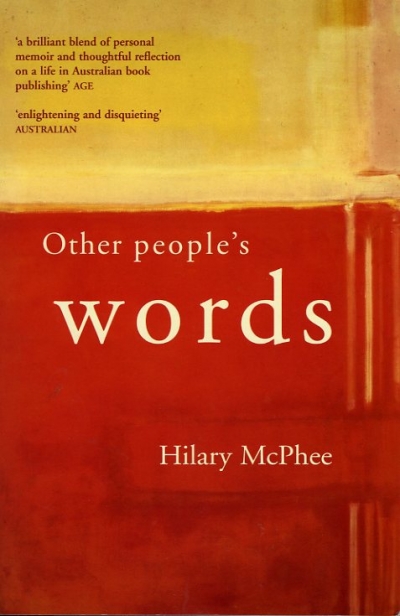