Lambs of God by Marele Day

Nuns supply the world with a wonderful source of all-singing, all-dancing, laughing or weeping material, from The Abbess of Crewe to A Nun’s Story, from The Sound of Music to Nunsense. Where would novelists and filmmakers be without the sisterhood? Catholic girls have strong feelings about nuns, often bitter but sometimes affectionate. The rest of us find nuns to be fairly remote figures, eccentric perhaps, but generally benign.

In Lambs of God, Marele Day has abandoned her more habitual line of detective fiction for something altogether more ambitious. Her new novel is a quaint fable set in a remote and crumbling convent inhabited only by three nuns, the remains of the Order of St Agnes, and a flock of sheep believed to be the reincarnations of the dead Sisters. Presumably, the return of the nuns in sheep’s clothing is a jokey comment on the Catholic church.

In their utter isolation from the world, Sister Iphigenia, Sister Margarita, and Sister Carla (the youngest, found as a baby on the doorstep and with origins we only learn at the end) have developed uncivilised habits. They eat with their hands, dress in rags, and don’t wash very much. Sister Iphigenia has an exceptionally well-developed sense of smell, comparable to that of Perfume’s hero, but bodily odours don’t offend her, simply forming part of her fabulously complex scent catalogue. The Sisters while away the long evenings by telling each other stories, garbled fairy tales and myths – Beauty and the Beast, Ulysses and Penelope, Neptune, Athena, Sleeping Beauty. Their year is punctuated by events like Shearing Day and Haircut Day, when they shear and snip and gather the wool and hair together for later use.

On the table were wool and hair from last year’s harvest, all washed, spun, dyed and skeined. The fresh crop of hair lay in a basket ready to be put through the same process. Sister Margarita sometimes wondered whether it wouldn’t be altogether simpler if they just started knitting the hair directly from the head. They could leave the needles eternally in place and knit another row when the hair was long enough. The pain suffered by sleeping on knitting needles could be offered up for the sins of the world.

Into this primitive idyll steps a man, his smell proclaiming his presence to Sister Iphigenia some hours before his arrival at the monastery. The sisters confuse him with the priest who visited them many years ago, Father John; but this is Father Ignatius, an ambitious, entrepreneurial young priest intent on climbing the ecclesiastical ladder. He has very modern designs on the monastery, seeing it as an ideal holiday resort once the decaying buildings have been restored to medieval grandeur. He has plans for a swimming pool, a helipad, 4WD access. The only problem is the three nuns. He had not realised they existed.

Innocent as they appear, the Sisters are resourceful. Father Ignatius’s scheme appals them, not only because it is ungodly and would shatter their accustomed way of life, but because he is tactless enough to admit the Agnes sheep would have no place in his future and would therefore be slaughtered. The nuns themselves slaughter and eat a sheep now and then, but in a spirit of deep respect. The same act has a quite different meaning when performed for different ends.

So they resolve to detain the sacrilegious priest by all means at their disposal. They drug him, encase his legs in plaster and feed him turnips and nettle tea, their own habitual fare. They steal his clothes, dispose of his car and take over his mobile phone, even learning (improbably) how to use it to their own ends. Father Ignatius is seriously out-manoeuvred and deeply mortified.

Lambs of God is a funny novel – funny peculiar and funny humorous. The humour lies both in the absurdity of the situation and in puns and wordplay. Acerbic little asides, clever juxtapositions of ancient and modern concerns and language, together with a deliberately shocking emphasis on bodily functions – from sex to farting – all enrich the brew.

The peculiarity could more politely be called originality. Lambs of God is different from any other novel you are likely to read this year. Although it has elements of thriller, satire, and straight novel with serious undertones, it is none of these, quite. Some readers will find this mixing of genres clever and entertaining; others may find it unengaging.

The writing is generally competent, apart from the occasional unforgivable slip. (Has it been entirely forgotten that there is a difference between ‘lay’ and ‘lie’? And that a phrase like, ‘as equally overgrown as everywhere else’ is grammatically incorrect as well as ugly?) From time to time a rich, even exotic imagination informs Day’s prose, giving promise of even more interesting work to come. 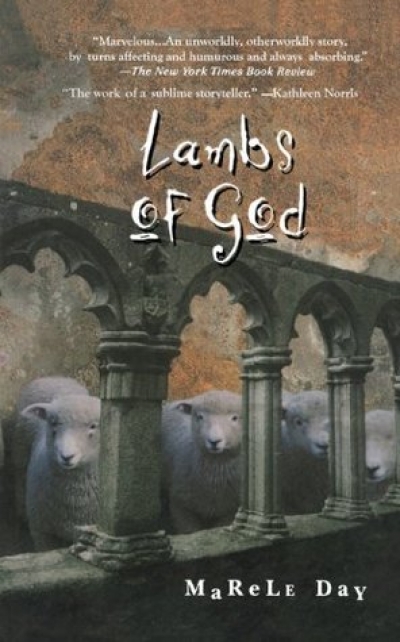