From a Chair in the Sun: The life of Ethel Turner by A.T. Yarwood

When most of literary publishing is in the doldrums, literary biographies are seen to be the one bright line in the publisher’s balance sheet. Such is the enthusiasm for biographies that a bevy of scribblers are at this moment casting about for a writer who hasn’t already been ‘done’. I find something unset­tling about this voyeuristic fascination where the life of a writer has come to possess an inherent interest, quite apart from the work for which the writer became famous. On this, if not much else, I agree with the caustic Gore Vidal:

Although the writer as an actor in his time is nothing new … for the first time the self now threatens to become the sole artifact – to be written about by others who tend to erase, in the process, whatever writing the writer may have written ... Today the writer need not write his life. Others will do it for him. But he must provide them with the material; and a gaudy descent into drink, drugs, sex and terminal name dropping.

If, unlike Patrick White or Christina Stead or Hal Porter, a famous writer has failed to provide the eager biographer with the material for a prurient exposé of personal vulnerability and culpability, the life recovered could well be a dud. Still, considering that thousands of people buy handsome and expensive biographies of writers whose work they have never read, it could be reasoned that the biography of a writer who had been read and loved by countless thousands of children over several generations would be money in the bank. I can only presume this to be the reasoning behind Viking’s decision to produce a handsome and expensive biography of Ethel Turner, written by retired academic Sandy Yarwood.

There is certainly nothing for the prurient in the life Yarwood has reconstructed. His reticence about the intimate is extraordinarily anachronistic. Early on we notice that Ethel’s stepfather was something of a brute who had terrible rows both with her mother and herself. The impact this may have had on Ethel, weighing up her choices between marriage and career, is never explored. Mr Cope’s furious and violent reaction to a joke proposal for Ethel’s hand ‘was not a happy augury for the real time when a real suitor would declare himself’ Yarwood helpfully tells us. Already a successful author of Seven Little Australians, Ethel responded hesitantly to the ardent courtship of lawyer Herbert Curlewis, whom she eventually married. Her diary records the very first meal she cooked for her husband and in-laws which Herbert refused to touch because ‘a carrot lurked within’. Says the biographer: ‘One can only wonder at the composure with which the diary entry was made. It seems likely that with the termination of their secret engagement and the beginning of Herbert’s more secure and complete role as husband the balance of influence had moved significantly in his favour’. Well, yes. Other diary entries for that first year of marriage suggest to Yarwood: ‘Quite rapidly, it seems, Ethel had got over the feelings that made her feel so repelled during the courtship by any approach to sexual familiarity’.

It is this marriage which lasted for forty-six years, which dominates the life of Ethel Turner, who chose to be wife and mother rather than follow the uncertain path of her friend Louise Mack into professional journalism. She always honoured the role of wife and mother over a professional career, nevertheless she was often capable of earning more in royalties than her successful husband earned as a judge. We don’t know what Herbert felt about his wife’s considerable professional success or whether he learnt to eat her meals without insult. In fact we don’t learn much at all of what might be found beneath the superficial surface of a conventional marriage, on the surface like countless others. From accounts of family events and outings we might gather that Herbert and Ethel had a companionable partnership. Yarwood is happy to accept Ethel’s summation of the relationship ‘never apart for more than a few weeks, never more than the human inevitable friction’; and to conclude that part of Ethel’s life with her record of Herbert’s last words ‘Not half an hour before he died, his hand in mine, he said, “My son” ...’ Mmmm. I have to ask what is the point of reconstructing a life if that is all one has to say about it?

But my concern with From a Chair in the Sun is not just that the narrative is pedestrian and the narrator obtuse. The book is very poorly written. On almost every page I find clumsy sentences and silly, anachronistic phrases. Like this taken at random from p. 356: ‘Life was drawing to a close for the youngest of the three maids who had accompanied Sarah Turner from England seventy years earlier’. Poor Ethel Turner. I still don’t know much about her, but I am sure she deserved a better account than this. 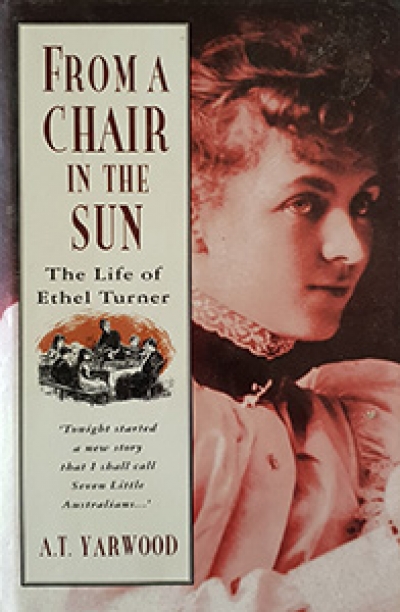 From a Chair in the Sun: The life of Ethel Turner