Where are the studies, the seminars, the books on John Laws, one of the greatest phenomena of popular culture in Australia for more than twenty years?

At the end of Chapter 3, ‘Modernism versus Popular Literature’, Docker articulates seventeen ‘assumptions’ of modernist mass culture study and teaching, ‘prefigured’ in F.R. & Q.D. Leavis ( curious candidates for the ‘Modernist’ cap, surely?). The cases against the following assumptions may be regarded as among Docker’s theses: ‘Cultural history is a matter of clear oppositions’; ‘Mass culture is not worthy of being analysed as true or authentic literature or culture’; ‘The cheap and easy pleasures of mass culture prevent critical thought’; ‘We should oppose cultural plurality or relativism’. Since In a Critical Condition, Docker has embraced post-structuralism.

In several chapters, Docker rehearses his apologia from In A Critical Condition. How I became a teenage Leavisite and lived to tell the tale’. (For the Younger Reader: Leavisism was a form of intellectual child molestation which flourished in Australian university English departments in the mid-to-late 1960s. Yesterday’s Orthodoxy.) I offer this parenthesis to Younger Readers, as this book, like so many rolling off the presses listed above, is primarily meant by their publishers if not by their authors as a primer. Docker’s cultural narrative is established by the book’s tale it is a sort of novel, a middle-aged bildungsroman adopting the first person singular as a dramatic device. Doubtless intended to establish a tone of the personal and a politics of the egalitarian, it succeeds unfortunately in suggesting David Copperfield narrated by Uriah Heep or, to be a little more up-to-date, the S.N.A.G. as culture-critic. I hear Karl Kraus turning in his grave.

Docker embraces the Postmodern because, like the Strip in Las Vegas, it ‘includes’ (Robert Venturi). ‘The spectator, the participant (is that an equation, or a refinement?), is not dominated by the expert, as with modernism (Le Corbusier, e.g.), is not rendered passive, but is more like a late twentieth-century embodiment of Walter Benjamin’s notion of the flâneur.’ Docker’s principal examples of Postmodern architecture in Australia are Sydney’s Cooper & Lybrand Building and the TNT Harbourlink Monorail. I beg to point out that the images Docker (or his publisher) provides of these two Postmodern icons are not so much photographs as hagiographs, and they are supplied by the proprietors. A less dewy-eyed cultural historian might have been a little more wary of supping with the devil. I think Jim McClelland, insufficiently celebrated as a ‘leading public intellectual’, would have cast a colder eye on these images and their sources.

Docker does offer some valuable criticisms of various cultural doxa. His demolition of reflectionism and Colin McCabe’s ‘Realism and the Cinema’ is triumphant. His querying of how cultural critics (Adorno and Horkheimer, e.g.) ‘know’ what working-class consumers think and feel is well-taken, and his account of the virtues of Dorothy Hobson’s empirical study of audience response to the English soap Crossroads is illuminating. His chapter on the· Australian television drama Prisoner is the book’s high-point. It is a pity he spoils it with a last sentence that is merely crass, embracing the language of advertising: ‘Prisoner there is and has been nothing else quite like it.’ A joke, perhaps? But a self-destructive joke, for it goes against the grain of Docker’s Bakhtinian thesis – there have been many modulations of Prisoner, from Apuleius through the medieval period down to the present day.

Postmodernism and Popular Culture is a deeply divided book. On the one hand, it opposes any notion that ‘cultural history is a matter of clear oppositions’, while on the other it sets up ‘Modernism’ (a very particular and misunderstood Modernism) as the Enemy. Docker’s need to demonise ‘Modernism’ as a movement that includes Le Corbusier, Joyce he ignores the possibility that Wysses infinitely complicates everything he says about Modernism V egalitarianism Barthes, Baudrillard and Lyotard, makes it into nothing less than a Chimera. Thus to demonise ‘Modernism’ in order to establish the undeniable values of Popular Culture falls into precisely the kind of binarism which Docker excoriates in his Modernists, Structuralists and Marxists alike. Truer than Docker knows, il n’y a pas de hors-texte.

A different kind of concern arises in Docker’s use of Bakhtin, and of Bakhtin on Rabelais. Docker is right in embracing Bakhtin’s celebration of heteroglossia, of polyphony, in Dostoievsky as elsewhere. But, and it is a very big ‘BUT’, neither in his text nor in his bibliography does Docker give cultural transmission might be represented thus: Rabelais–Bakhtin–Docker–Lecturer–Students.

That potential deferral is what makes me despair at the triumph of Cultural Studies. To put it another way, there is something galling about a book produced by one of Australia’s leading public intellectuals’ which, while putting Bakhtin and ‘carnival’ and ‘Menippean satire’ at its centre, declines to mention virtually any Australian literature, ignores the existence of Such Is Life, Rigby’s Romance and anything by David Foster.

Is Bakhtinian ‘carnival’, where people participate ‘both as actors and spectators’, where ‘carnival does not know footlights’, anywhere available in the post-industrial world? Where does Bakhtinian carnival, which Docker celebrates as the antidote to Modernist authoritarianism, occur in Australia? Not at Sydney’s Carnivale, not at the Melbourne International Festival, because these are managed {though I intend no Bunyah-based East German analogies, no implications of social engineering). Surely not on television, despite what Docker argues about game-shows, despite Docker’s ‘dialogic’ case, television being a medium essentially advertising-engineered, where ‘popularity’ is a social construct.

What of the Cinema? To paraphrase Jean Baudrillard on Disneyland, the real meaning of a Hoyts Cinema complex is found not on the screen, but in the foyer, in the world of video games, banks of TV screens with trailers that make seeing the film a mere supplement, the Baskin-Robbins franchise, the bars, the souvenir shops. Admittedly, there is vestigial carnival in the street outside where buskers operate. Docker defers to Walter Benjamin’s assertion that’ cinema audiences ... could organise their enjoyment in their own way, as simultaneous collective experience’. This is nonsense, especially in the nervous ‘90s, when advertising invades the cinema, both before and during the film. The cinema is a mere adjunct to commerce, when itis located in shopping malls such as East-Gardens in Sydney.

To return to the centre of Docker’s analysis, television. I don’t wish to deny that Tom and Jerry, I Dream of Jeannie, any videoclip (the fascist genre par excellence) with Madonna, feature the carnivalesque as structure. Rather I want to draw attention back to the context, the world of commerce, of capital, of social construction if not control. Docker likes the Sydney Monorail because it reminds him of ‘the beginning of Fritz Lang’s Metropolis ... The Sydney monorail is similarly futuristic’. Has Docker thought through the very particular, dystopian future envisaged in Lang’s film?

Finally, no, there is no mention of John Laws in this book:

This is dial-in democracy, on the most complained-about radio program in the world ... Behind the golden microphone of arrogance .. You and I, the most powerful group of people in the world, the de facto opposition ...

Would Docker take Laws at his word? Any consideration of talk-back radio must complicate Docker’s Panglossian picture of the mass media. On these programs, insult is raised to an art form, masochism is the order of the day. Is that polyphony, is that heteroglossia? The microphone points one way. 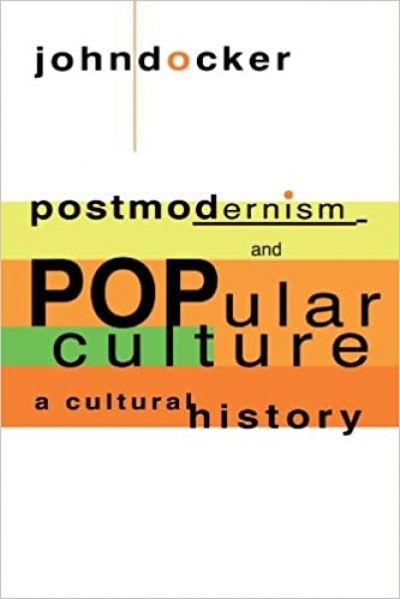