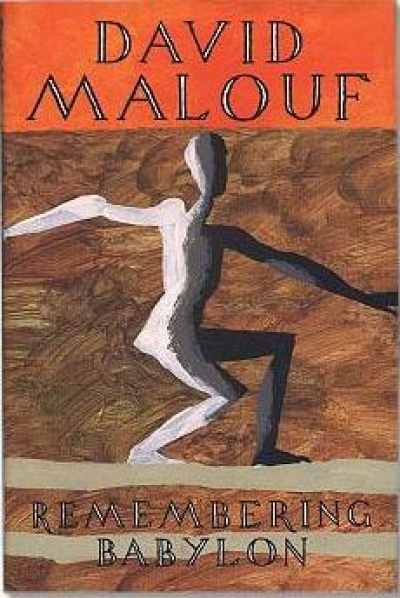 ‘One day in the middle of the nineteenth century, when settlement in Queensland had advanced scarcely more than halfway up the coast …’ The opening lines of the novel seek to place it and us squarely in the discourse of history; to require that we lay aside the credulity with which the reader welcomes in romance and fantasy and become fellow-enquirers into the world of factual record, population figures and dates, marks on maps, important conflicts and the names of governors.

The settlers are introduced immediately but, as it were, by proxy, in the persons of their children. This is significant since, despite the no-nonsense opening, David Malouf’s novel is really a parable about becoming as little children in the new Promised Land.

For the parents of Meg and Janet (guardians to Lachlan Beattie), the strange country ‘even in full sunlight … was impenetrable dark’, despite their knowing that ‘six hundred miles away in the lands office in Brisbane, this bit of country had a name set against it on a numbered document, and a line drawn that was empowered with all the authority of the Law’. It may be that the children will see differently.

Malouf is adding layers, with hindsight, to the two-dimensional Genesis story of how ‘we’ came to be here and how ‘we’ whose touchstone of normalcy was Mother England made heroic adjustments. Remembering Babylon of course recalls the psalm about remembering Zion, modulated by the epigraph from The Four Zoas: ‘Whether this is Jerusalem or Babylon we know not.’ The prophet in this wilderness who comes closest to perceiving the true lineaments of the Promised Land is Mr Frazer, minister and naturalist. His flock includes many who cannot or will not see.

Gemmy Fairley, who appears as ‘something extraordinary’ to the children playing ‘at the edge of a paddock’ in the first paragraph, is the messenger from beyond who precipitates the crisis of perception in Jerusalem or Babylon. He is a Shakespearean or, more accurately, Darwinian image of unaccommodated man, ‘this brutish specimen’, ‘naked essential humanity’, as the schoolmaster first feels (later coming to believe himself a ‘high-minded, fastidious little theorist’).

Gemmy is white but has lived among the blacks since his early teens, now retaining only a modicum of whatever the whites consider sets them apart, and having adopted to an alarming degree the characteristics of his erstwhile hosts (even their features; a modified jawline allegedly due to eating their foods). The children observe the stir he creates among their elders and wonder ‘if some new set of rules was in operation, and the blackfella’s arrival among them was to be the start of something’. Schoolmaster and minister between them patch together from Gemmy’s scraps of English a mostly-fantasy account of his experiences.

The parable about lost and found identity that follows turns on language. Gemmy is drawn to the settlement by overheard words. ‘It was the words he had to get hold of. It was the words that would recognise him.’ Gemmy’s estrangement from himself seems retrievable by words that might ‘catch the creature, the spirit or whatever it was, that lived in the dark of him’, and he runs towards the children ‘to prove that all that separated him from them was ground that could be covered’. In this, of course, he is deceived, and at last demands back the words on paper which he understands to be imprisoning him, looking back to the land for ‘the word … that would let him enter here’.

As Malouf unfolds the consequences of Gemmy’s first impulsive rush, he is often inside his character’s head, populated as it is with blackfella notions of what it is to be in and of the landscape, intuitively aware of how impotent transplanted nineteenth-century empiricism is by contrast. Mr Frazer is happy to take instruction on these ontological matters from Gemmy, for whom the country throws off ‘luminous flares’ even ‘in the deepest shade’. Gemmy casts light ‘only in patches for Mr Frazer, leaving the rest undisclosed’. While he respects Mr Frazer’s botanical drawings for the humility they reveal towards their subjects, he understands that the blacks who, unseen, watch their expeditions, see the minister as ‘the land itself saw: a shape, thin, featureless; that interposed itself a moment, like a mist or cloud, before the land blazed out in its full strength again’.

Here is the mystical heart of the book. Mr Frazer is a spiritual brother to Mrs Godbold and White’s many nature mystics, but Malouf is seeking, respectfully, to incorporate elements of blackfella perception among our visions of the land. Choosing Gemmy, whose double-vision is muddled and inarticulate, avoids blasphemy; Gemmy who jumps the boundary fence, who encapsulates dream-essences of two worlds (though what he retains of his Dickensian childhood is only nightmare). The play of Mr Frazer’s and Gemmy’s ways of seeing animates the book.

Other dramas – the lives of the McIvors and the predictable violence Gemmy precipitates – are set out, but recorded for the most part in another register. Mr Frazer’s credentials are dogged ‘accuracy and attention’ devoted to keeping up ‘with the tumbling complexity of things’, and the capacity to write in the fluent tones of prophecy ‘under the hiss of the evening lamp’ when ‘the lines run crooked … and might come from another hand’. In this mode he sees the limitations of the English ‘habit and faculty’ of apprehending the world. Gemmy is ‘a forerunner’, an ‘exemplum of the simplest and most obvious sort’ of future’ children of the land’.

It’s a gently messianic tale, with Gemmy not so much John the Baptist as himself an inadequate Christ, dumbly embodying the new message of immanence rather than transcendence; reverence before the land which is, was and always will be. The echoes of Patrick White are strong, but grandiloquence is mostly avoided. Loads of romance here, though, despite the implicit disclaimer in the first lines. For some reason I felt the book might have been written in one long stretch. It has that unity of ‘feel’ about it and also a hint of repetitiveness.

Malouf disclaims origins ‘in fact’, except minor ones, but he attends carefully to surfaces and detail in this clash of paradigms. There’s a strong lyricism about the result, which mostly compensates for the (even if unconscious) didactic intent and a rather too neat symmetry, and for a certain heavy-handedness about some central metaphors, such as Janet McIvor’s beekeeping. Making her a nun seemed to be gilding the lily.