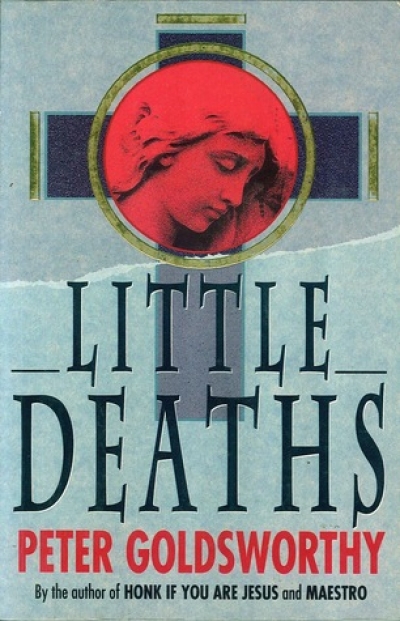 ‘Last time I saw you you didn’t look so good,’ he said.

Terry stopped, and turned. His face seemed genuinely puzzled: ‘Must have been a long time back, Scott.’

And he walked on, leaving Scott standing, flatfooted: but after a dozen paces he turned yet again, and this time shouted, his face purple with anger, as purple as it had been on the night of the Scene: ‘What do you want – a fucking medal?’

The words came in a shower of duck-spittle; then he turned on his heel and walked quickly away, and the two men would never speak again.

This is the finale to ‘The Death of Daffy Duck’, one of the stories in Peter Goldsworthy’s latest collection. ‘The Death of Daffy Duck’ outlines the end of a friendship between two bon vivant couples whose years of dining out together had come to an end in a restaurant, during dinner, when one of the men almost choked to death on a piece of food (the ‘Scene’ referred to), and the other saved his life. From that time on, the saved man will not speak to his rescuing friend.

A fine story, well told, but the real cleverness is that the reader is left woven into the puzzle of the relationship. What was at the bottom of the saved man’s rage? Humiliation at the public nature of the choking and the saving? A resentment at being the weaker of the two in the incident? Horror at being exposed as so clumsily, so trivially mortal? The tale was as real to me as if I had experienced it myself. And perhaps, in some sense, I have.

This power to call up echoes is a great strength of Goldsworthy’s writing. I put it down to this, that his observation is very acute, but better still is his instinct about what to leave out.

His current crop of ‘little deaths’ is, as in earlier volumes, set in a kind of all-round Australian inner-suburbia, peopled largely by the privileged. Goldsworthy stories don’t feature elaborate set-ups or vivid pictures of the locations. Unless it’s strictly germane to the theme of a story he offers no run­down on the politics or the history of a time or place. Yet the arena in which his characters play out their difficulties is strongly evoked, unmistakably modern Australia in every nuance.

His characters, too, arrive on the page fully evolved and, as a rule, already armed for destruction. Often lacking any of the usual privations of the human race – hunger, poverty, or lack of education, for example – they are at liberty to expend their creative furies in destruction, of themselves, or of each other.

The poverty of spirit is bearable, even amusing, as long as the characters are uniformly crippled. But when a character is chosen for the role of dupe or butt, as in ‘The Nice Surprise’, Goldsworthy transfers to another level. His moral purpose gains an outline.

In that story, a grandmother comes to town ready to love her son and his family, and finds, unexpectedly, a bitch of a daughter-in-law poised to strike on every conceivable occasion, and then on an inconceivable occasion, when the older woman is hauled off to hospital desperately ill. The son visits alone, ineffectually wriggles and lies and eventually explains to his mother that she can’t stay, or telephone, him and his family any more. His wife has told the children their grandmother died. The son apologises and leaves.

I once made a rather grand comparison of Goldsworthy to Chekhov; I began this book prepared to be embarrassed by my earlier enthusiasm, but now I find myself thinking about Raymond Carver. What they all have in common is the fine etching of a small slice of the world that they know well. But Carver and Chekhov are both kinder, sadder observers of the human condition. Goldsworthy is an avenger. His stories are full of wit but he is not always sympathetic. Maybe there’s a touch of obsessiveness with sickness in his narratives. I think I’d be happier with a fuller, more wide-ranging view of the world. But the novella in this collection, ‘Jesus wants me for a Sunbeam’, delicately scarifying in its own way, shows that Goldsworthy can find a footing on yet another level, of deep sympathy, without relinquishing his talent for surprise.

Buy this book. You won’t regret it, even if sometimes your jaw clenches. In the economy of his telling and in the conviction of each story, Goldsworthy shines like a star. His jigsaws of events dovetail in witty imitations of life’s strange twists. Dialogue is exact, often cruel, stunningly mean. And I don’t want to be presumptuous but I’ll bet you’ve had some of the conversations you’ll read in this collection.