The Automatic Oracle by Peter Porter

In the The Automatic Oracle, Peter Porter’s second book since his Collected Poems (1983), this writer is at the height of his powers as a versatile, intelligent, and provocative voice of our times. He is a resistance fighter against false prophecies by disc jockeys, bureaucrats, businessmen, lawyers, academics, politicians and others. Such utterances must be scrutinised or ridiculed because they muddy the language itself, the sources of all oracular wisdom and the hero of this book.

But let the Redback be my image of
The naturally malevolent activist,
The dried-blood cross upon his back be

This Redback, unlike Clive James’s in Unreliable Memoirs grows in significance beyond folklore to become the scourge of all hedonists and facile progressivists

His atavism’s there for all to see,
Devoid of any Panglossian lumber,
A backyard warning to the newly rich.

Voltaire’s Dr. Pangloss recurs through Porter’s poetry, often with application to Australians who delusively share his superficial optimism. The concluding lines of ‘Redback’ expose the sting of Porter’s alternative spider-philosophy

How subtle this philosophy of his,
To warn us as we fumble in the dark.
Relieving nature won’t be comfortable.

Porter is not, of course, a poet of the outback, or even of the outer suburbs. ‘Nature’ is not his bag. His metropolitan preferences were fully aired in a celebrated exchange with Les Murray in the mid-1970s, culminating in Porter’s fine reflective poem ‘On First Looking into Chapman’s Hesiod’, with its much quoted lines

For Porter, the metropolis is where it’s at. But in order to survive its babel of voices, creeds and prophecies one must practise the skills of vigorous doubt, exercise the cunning of the ‘naturally malevolent activist’. Porter’s poetry transforms doubt into an art form, resistance into a mode of celebration.

In The Automatic Oracle poetic forms themselves become instruments of resistance to conformity. Porter’s adeptness with a variety of verse forms has been evident since the 1960s. His latest volume extends the range by including light verse forms such as the triolet (‘Try a Triolet’) and traditional ritualistic forms such as the pantoum, which the French took over from the Malay pantun (‘Pantoum of the Opera’). Such jeux d’ esprit demonstrate the writer’s ability to rewrite tradition in modem terms. Porter’s self-imposed trial by triolet contains a hint of self-congratulation (‘the one form that Auden shirked - but I didn’t’) but the characteristic self-deprecation is also there in the demonstration of the form’s restrictiveness.

The difficulty for an editor of Porter’s work is that considerable triumphs occur in apparently minor poems whilst major poems often insist on their modest intentions. The grand gesture is no more inherently serious to Porter than the throwaway quip. Yet many poems do confront indubitably big issues such as the meaning of death, human guilt and betrayal, the consolations of religion and art. Surprisingly for a religious sceptic, Porter often refers to God and the gods, paradise and hell. Notions of paradise, for instance, are explored in ‘Paradis Artificiel’ and ‘Paradise Park’. In the first of these, the speaker presents himself as a monster ‘truffling’ through one of Claude Lorrain’s idealised Arcadian landscapes: the knowledge of paradise requires knowledge of the monster. ‘Paradise Park’ ironically explores some paradoxes of creativity but affirms the need that drives creative spirits towards ‘the sails of Paradise Park’; their quest persists alongside ‘the board games with commanding titles / Conspiracy Theory, Life Support, The Pursuit of the Millennium.’

A reason for celebrating the dream-state, as Porter frequently does in his latest book, is that it remains a prime source of creativity and truth.

Such mistakes seem happy accidents, but one wonders why they never occur so wittily for oneself.

To clear the space for such original error-making, or creativity, esoteric or pompous intellectual theories may have to be demolished. Porter understands well and sympathises with certain elements of contemporary literary theory, for instance, and shares aspects of the deconstructionist course. This does not prevent him from ridiculing the self-importance of some of their claims: ‘Keeping ahead of death and Deconstruction / We have the text we need to play the game.’ Discourse theorists should make the poem ‘Disc Horse’ compulsory reading for literary theory students:

… Round and round
go galaxies of talk and everyone knows
not to intrude on anyone else’s space
for fear that no one then will have the power
to recuperate the narrative.

The enemies here are spuriously fashionable phrases and a simplistic reductionism which the poet-critic must subvert.

Porter’s ‘difficulty’ continues. But what does it amount to? Each new book sends me to the dictionary, which is not something an engaged or curious reader resents. But Porter’s difficulty extends beyond vocabulary or syntax to a view of life. His resistance to easy solutions is dramatised in poem after poem, in which the temptations of glibness are displayed alongside the necessity to acknowledge human complexity. There is nothing perverse in this kind of difficulty, which is thrown into relief by occasional shafts of lyric illumination.

The Australian poems in The Automatic Oracle confirm the metaphoric force of Porter’s country of birth in his search for meaning. In ‘The Melbourne General Cemetery’, for instance, a ‘cautious man-amphibian’ walks among the dead with a sense of almost domestic affinity. The tonal control in his poem is superb. And in ‘Southsea Bubbles’ the poet tries to attune himself to the riddles of the continent and hemisphere to which, in some respects, he seems always ever bound to return.

And I must hear before I die
this oracled South
speak true love
from a lying mouth.

It is high time we had a selection of this outstanding poet’s work which properly recognises his importance to Australian readers. 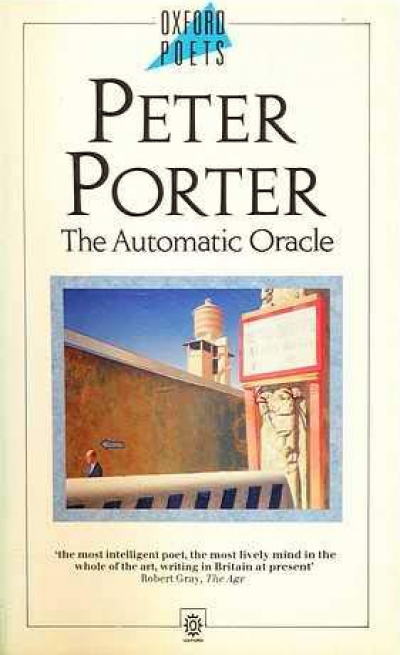