From short stories Peter Carey has proceeded to long novels. This is his third. It is dense with incident and meticulously delineated characters who drop in and out of the narrative, always with a purpose. In some ways it is as surreal as Bliss, in others as naturalistic as Illywacker. But it is like neither of these novels. It cannot be said to be ‘better’ than either, if this mode of comparison can be used legitimately in a literary sense.

What can be said is that it is a marvellous piece of storytelling, which doesn’t stop there. Its theme explores and exploits, and to some extent explains, a time around the halfway mark of the nineteenth century, which bears an extraordinary resemblance to our own.

Of course, there was a certain innocence, lacking now, or at least Carey conveys the feeling of innocence in fine prose which gives the book a lustrous surface. Here is Mr Ahem, who lives at Parramatta, walking from his Pitt Street hotel to see Lucinda in her Longnose Point (Balmain) farmhouse on a Sunday morning:

There was in this long slow walk a kind of conceit. For to soak one’s shoes in dew-wet grass, to pick one’s way along a foot-wide path of the meandering type more often made by cattle than by humans was, in Mr Ahern’s mind, evidence of a kind of honesty; he could see himself as a man with a staff on the road, a traveller in a parable

It is the landscape that is innocent, not Mr Ahem, and the Mr Ahems have not changed with the landscape. Lucinda did not wish to see this representative of that ‘peculiar combination of ignorance and bull­like confidence’, which she noticed in men.

Lucinda does not actually turn up until page 77, after her father, a farmer, has been killed when his horse rears and throws him to the ground during a ceremonial procession on Palm Sunday in Parramatta. Her mother continues to run the farm until Lucinda is eighteen, when she dies of influenza. Lucinda – naïve, strong-willed, independent, but not convinced that women think as clearly as men – is on her own with a bit of money. She goes to Sydney, then to London for a visit, returning on the ship Leviathan.

Meanwhile, Oscar is growing up in a Devon village with his widowed father, a fundamentalist cleric whose hobby is the collection of aquatic invertebrates. Oscar defects from his father’s brand of religion to a loony Anglican clergyman named Stratton, goes to Oxford, is ordained and takes ship for Australia and a curate’s job. On the Leviathan, Oscar and Lucinda, fatefully meet.

If Oscar and Lucinda is about the strange bedevilled love of one for the other, it is also about gambling, a passion which they share, and about glass. An incident in Lucinda’s childhood turned her on to glass. She is fascinated with the idea of glass but also hopes it will make her fortune.

The evidence of Carey’s research into gambling and glass is formidable, to the extent that he makes you believe every word he writes. Perhaps publication (February here, April in Britain, May in the United Kingdom) will bring argument from racing buffs, card players, and the Association of Glass Manufacturers. (I am sure there is one.) But listen to Carey on glass as Lucinda buys the factory at Darling Harbour with her inheritance:

Glass is a thing in disguise, an actor, is not solid at all but a liquid; an old sheet of glass will not only take on a royal and purplish tinge but will reveal its true liquid nature by having grown fatter at the bottom and thinner at the top; and that even while it is as frail as the ice on a Parramatta puddle it is stronger under compression than Sydney sandstone; that it is invisible, solid, in short a joyous and paradoxical thing, as good a material as any to build a life from.

The first- and second-class passengers on the Leviathan mixed a bit, and continue to do so when the voyage ends. One of them is Mr Smith, the quintessential liberal who lets things happen, hopes for the best, stands aside when blacks are murdered and clergyman kicked, but rallies with speed and violence when he realises he can help his friend Oscar and pay off old scores. Mr Smith is perfectly believable. But then, so is everybody. Except perhaps Oscar. Could Oscar be as physically and mentally repellent as depicted, and still attract the love of Lucinda and the reluctant friendship of a few at Oxford and afterwards? Pale, gangling, unwashed, timorous, Struwelpeter Oscar? When the curacy fails, Lucinda gets him work in the business of a well-to-do friend, finally takes him from his squalid lodgings to the farmhouse towards which Mr Ahem walked with such a sense of purpose and righteousness.

Remarkable as Lucinda and Oscar are in their different ways, there·are a dozen or more characters who could qualify for a novel of their own: Mr D’Abbs, born Dabbs, who entertained at cribbage in a mansion where the furnishing were relentlessly second-rate; Mrs Burrows, who was entertained there, and who then entertained presentable young men in her bedroom; Mr Stratton, who having been steered towards the track by Oscar goes for broke, then hangs himself from the rafter above his pulpit; Oscar’s father Theophilus, bereft of wife and son, and Oscar’s fellow theological student at Oxford, the egregious Wardley-Smith who turns up in Sydney in time to miss Oscar as the latter sets off on an expedition to the Bellinger River with Lucinda’s presentation church, made entirely of glass.

The critics were right: the congregation would scorch in it on summer days, and there was nowhere for the parson to change his vestments in privacy. The account of the expedition from Sydney to the north, and its terrible finale, makes one of the most memorable passages in a novel that has many of great set pieces, such as Lucinda’s ‘trot’ from Balmain to Chinatown, in her gig, to join a pak-a-pu game and her visit to the glassworks to find them garlanded with cornflowers, lachenalias, poppies, yellow daisies as a token of reconciliation (for all the wrong reasons) with her management and staff.

If the novel is about gambling and Christianity (or its representatives) and glass and the independence of women it is also about accidents. It confirms the domination of accidents in life, (not accidents celebrated by the newspapers and television in which petrol wagons overturn on the highway and linesmen are electrocuted) but accidental happenings that change the course of events, such as missed glances at social gatherings and missed appointments and hints not taken and allusions not picked up.

I hope nobody will see Oscar and Lucinda as simply a very long costume drama or period piece, suitable for publication in the year of the Bi. Any year that it was published would be a good year.

A small postscript: since the language is everywhere under siege, one could wish that the author would not use ‘careening’ and ‘cohort’ in the way he does, even although the Concise Oxford Dictionary, gives grudging permission. 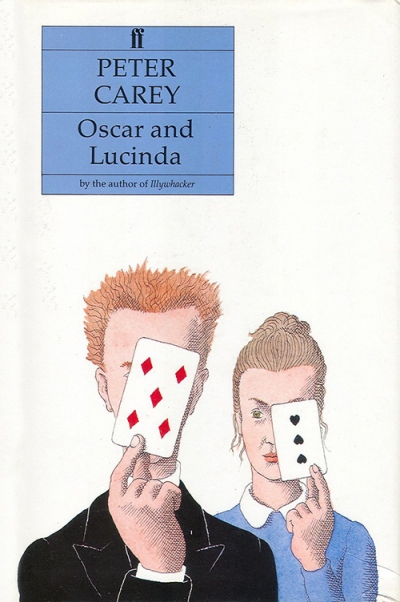