Fiction which is well-choreographed is difficult to resist. Joan London’s first collection of short stories, Sister Ships, is a dancerly go at mimesis; poised, unerring, it keeps its promises. And to run the tautological line between ‘literature’ and life, as all writing must, reminds us of the possibility for faux pas as well as the pas de deux; in one instance, an amnesia as to what has already been said, and in the other, stories which are so gracefully designed that they can say the same thing twice, or more, and we remember and witness such repetitions with pleasure.

This book is published by the Fremantle Arts Centre Press and is noteworthy, also, as the Age Book of the Year for 1986. Selected from four short-story collections and one of poetry (no novels qualified for the short list in this category), Sister Ships earned high commendation:

They are ‘stories of unusual range, perception and consistency of quality throughout … These give notice of the presence of a writer whose honesty, compassion and intelligence deserve, and will surely gain, wide recognition … At her best, she encapsulates the experience of those tough, wary survivors of the ’60s who have shaped and distanced the confusions and upheavals of their own growth in a world where the centre holds with difficulty.’

It is interesting to note the judges’ reflection upon and contribution toward the ascendancy of short fiction in Australia at present, and the conjunction of this fact with their recognition of the 1960s as a locus for contemporary writing – especially, I would suggest, for women writers.

Appropriately, London’s stories are guarded by nostalgia and nabbed by 1980’s feminism. Despite an exciting plurality, this current ethos is essentially marked by a vigorous retrospection; Farmer, Garner, Burke, for example; it validates the long look back. In some ways this unsweet revisioning would provide the postscript to Helen Garner’s ‘before’-and-‘after’-feminism dry mock in ‘The Life of Art’, if that story, itself, wasn’t part of it. From London to the Garneresque may not be such a long distance, nor such a new journey. Different, but not new.

I would qualify this, however, by suggesting that one of the complexities arising from this present form of feminist revision is its strange, open invitation to readers who can’t remember, simply because they were never there. Such readers handle the talismanic figuring of the 1960s and 1970s out of curiosity for the precedent, not from remembrance of things past. This is not a petulant refusal to ‘engage’, to acknowledge what has gone before, fact and myth, but a difficult, tautological reading: how to shake the sense from what is being said over again, is known second-hand, and yet which is alluringly given firsthand as the authentic experience of the first-person narrator. It makes one wonder about sisterhood, and other covers.

‘Sister Ships’ and ‘First Night’ are two of the strongest stories in the collection. Both deal with the crisis of adolescence and subtly rework older mediations of this topos; the sea-voyage and children’s play-acting, for example. London’s talent is commanding as she negotiates the clichés here. In the title story three school girls, recently matriculated, travel loosely together on a sea-trip to England. Caught in transit between the solid land masses of family and home, and the nearness of sexual experience, they are profoundly bored; and the story discovers that boredom is something to be quarried. It is typical of London’s understatement that the opening scene is of borrowing clothes, that adolescent economy of identity, and a more serious appropriation of speech; the first-person narrator is introduced, inimically, without words, as mere breath:

Kaye rips off her bikini and reaches into the wardrobe.

I take a breath. I’ve practised this. I was going to say, in a light, pleasant voice, ‘Actually Kaye, I’d thought of wearing that myself tomorrow.’

Anonymity and alienation are at the heart of the story; in the way its title catches at the cliché of passing ships in the night, literalised in this case, and then ironically re-dressed as the protagonist is wound neck to foot in white crepe paper, topped with a black, cylindrical funnel for the Fancy Dress Ball by her Sister Ship; a sibling simulacra with whom she shares nothing, only nondescript food at First Sitting.

‘First Night’ also considers kinds of migration. Here the intercourse between child and adult worlds, English and Australian cultures, exuberant images of self and chastened, revised ones, gives way to various intuitions. It is not simply that the pre-pubescent girls, whose play-acting commands an adult and familial audience, hasten vividly between scenes – ‘They ran up and down the corridor in costume changes, nudging one another, longing to get back to that high bright place again’ – but that from on stage their actions are commanded by and delivered up to those who gaze. Self-consciousness, with its internal monitoring of one-self, is shaped with remarkable sympathy:

You could even dare to look at the audience … Witti was their cheerleader. You could see him at the front, his eyes and teeth gleaming. Funny the feeling that everything you said was for him. And way at the back, the familiar planes of her own parents’ faces, naked-looking, their smiles subdued. Probably not wanting to show their pride. Judith was sitting in front of Dean’s shoulder, shadowed by the hall light. Eyes faintly squinting. No smile. Don’t show off Watching for it.

Funny feelings indeed. Moments of perception like these can be handed in by the narrative, as if unowned: the story appears to talk to itself through Janelle’s consciousness, but her notes on adult behaviour remain a curious public property. Only when casual observation is startled into empathy does she claim a personal knowledge: ‘Her parents were shy.’

In this instance London’s subject matter and adroit use of free indirect style summon Katherine Mansfield to mind. When the well-travelled De Witt girls arrive next door, in ascending order – Amanda, Virginia, Antonia – Jonelle experiences an acute sense of cultural difference, and re-colonisation. Their voices are out of Enid Blyton, as are their buckled-up sandals. They come from the Northern Hemisphere which provides the imaginary setting for Janelle’s fantasy games (its weather is more creatively elemental), stories played out with bathetic intensity between the incinerator and the compost heap ‘up the back’. Self-imaging, London writes, is this precarious crossing between Homes and other boundaries ‘just to get yourself inside’.

Affinities with Mansfield’s work are evident in some of the other stories in Sister Ships. ‘The Girls Love Each Other’ and ‘Lilies’ detail the shifting relations between mothers and daughters. Here, the company of women provides an essential source to re-encounter the world-as-made (and male), and the existential insights suddenly sprung from a shared discourse. London’s reach into the recollected past, and into her characters, is finely angled; in the former story she sheers away from sentimentality and the banal (often where Mansfield falls); and the latter story works from an implausible situation to the more than credible, the ordinary made brightly new.

Conversely, in a story such as ‘Travelling’ the central character’s gravity of demeanour is the seriousness of London’s careful art; Ruth is accosted by and endures the strangeness of a country invisibly at war in the same way as she carries, in her own life, those silences which shadow language: ‘Chaos in Laos’ as one character lamely remarks, truthfully. 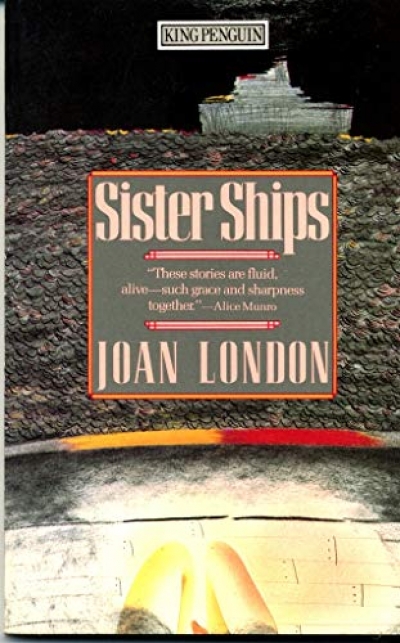