Les Murray describes his poetry as ‘a celebration of life; a contemplation of life in ways that interest and delight people and make them reflective’. Poetry, he says, is ‘primarily not to be studied, it is to be read’.

Few people could disagree with Murray that the most desirable response to poetry is for it to be read out of love rather than out of a sense of obligation. But inspiring this distinction between the ‘analytical’ and the ‘instinctive’ approach to poetry are Murray’s ‘deeply ambivalent’ feelings about the motives behind much literary criticism. Murray is not totally convinced that it functions in promoting literature, and like a number of his contemporaries such as Judith Wright and Patrick White, he is also wary of academics.

Ironically, while poet in residence at La Trobe University in July 1984, he expressed this concern frankly. ‘While there are certain kinds of criticism I trust, there are times that it looks like an attempt to trump authors and treat us the way that anthropologists treat their subject peoples. We are the primitives and they are the enlightened, descending to study us. Right now there’s a big push on to tum criticism into a super intellectual discipline. There’s a fearsome amount of concealed jealousy in writers and there’s a lot of secret failed writers in universities too. So you are walking into a radioactive zone when you walk into an English Department.’

It is curious that Murray is so antagonistic in his response to academics because the relationship is a symbiotic one where he is greatly dependent on their analysis and promotion of his work as ‘syllabus material’, just as their scholarship is enriched by the contribution of his art to the ever-growing volume of ‘Australian literature’. Perhaps his attitude can in part be traced to his undergraduate days at Sydney University, in the late 1950s. Murray jokingly recalls that he received ‘probably the least distinguished degree in English that the university ever conferred on anybody. I was busy educating myself in the library and film society and occasionally attending to my course. I didn’t learn a lot from the English Department. There is fault on either side. I learnt a lot more about literature from the German Department. The German Department was less narrow. It would consider questions of philosophy and history of culture and all these sorts of things along with literature. The English Department’s approach was far more narrow.’

This approach, Murray feels, is also reflected in most English anthologies of poetry. He is currently editing the forthcoming Oxford Anthology of Australian Verse [The New Oxford Book of Australian Verse, 1986] and intends it to be more eclectic than past anthologies. ‘An English language anthology will tend to have one kind of poetry – high literary art poetry. A German anthology will quite often contain hymns and other kinds of folk poems.’ This sentiment is echoed in Murray’s poem from The People’s Otherworld, called ‘Satis Passio’ where he says, ‘God bless the feral poetries’.

Without venturing to offer analysis of his latest collection of poems, it is interesting to observe that the diversity of tone and style in this book also reflects this eclectic approach. There is the laconic, humorous narrative about ‘Bill Tuckett Telegraph Operator’, the surprisingly lyrical, witty yet poignant ‘Homage to the Launching Place’ about ‘the pleasure-craft of sprung rhythms, bed’, alongside poems of a more serious tone such as ‘Three Poems in Memory of My Mother, Miriam Murray née Arnall’ and ‘Equanimity’. In this last poem, Murray’s feelings about a kind of impartial core that exists at the heart of ‘human order’ are indicative of his attitudes to poetry as well as people. Equanimity is a state where the churchman, loser, farmer, and artist ‘are, in short, off the high comparative horse of their identity’. Preoccupations with literary convention and criteria for ‘high’ and ‘low’ poetry which interfere with the reception of a poem are like preconceptions about identity – they stratify society and art. But the overview that Murray establishes in this poem ‘where nothing is diminished by perspective’ is ultimately not limited by social or artistic egalitarian ideology. It is concerned with recognition of the equality of the spirit.

Thus Murray is wary of theoretical criticism or terminology that seeks to categorise his expressions in poetry, as Robert Gray and Geoffrey Lehmann do in the biographical blurb that precedes his poems in their Younger Australian Poets anthology. They describe Murray as ‘anti-élitist’. Murray’s reaction to this description was one of exasperation – ‘Those sorts of politico-sociological essays on the poetry and the poet confirm the idea that anthologies shouldn’t have that kind of material at all. It distracts people. It tends to make the simpler reader read through a screen of somebody else’s pre-conceptions. It’s what I call “Police Dossier” criticism.’

This determination not to reduce the sublimer questions of life to sociological or material considerations is evident as Murray talks about his affinity with Catholicism. He calls himself a ‘naturally Catholic soul’ and alludes to the ‘depth of tradition’ and ‘utter contrast’ between some Catholic thought and that of other denominations, some of which he feels have lost their mystical depth. ‘All they can do is try to turn themselves into some kind of social welfare organisation; gradually it is not a church anymore but a social welfare outfit, with a touch of apologetic religion.’ Murray’s judgement may seem harsh, but he is no less scrupulous in self-examination of his motives for turning to Catholicism, or, as he terms it, being ‘chosen’ by Catholicism. ‘I sometimes ask myself to what extent was it an instinctive rejection of a lot of modern idiocies, that is to say, a negative reason, and to what extent was it a positive reason, a real attraction, a real relationship. I think the positive outweighs the negative. To some extent it helps me keep my balance against the shallowness and craziness of the world’s strange urgencies.’

This striving for balance is constantly evident in the dialectic nature of Murray’s poetry where he subtly debates or discusses aspects of existence, convincing the reader of his interpretation through metaphysical ingenuity:

Art is what can’t be summarised:
it has joined creation from our side,
entered Nature, become a fact
and acquired presence …

Art’s best is a standing miracle
at an uncrossable slight distance,
an anomaly, finite but inexhaustible,
unaltered after analysis
as an ancient face …

Beauty lives easily with equities
more terrible than theory dares mean.
Of the workers set free to break stone
and the new-cracked stone, which is more luminous?
God bless the general poetries?
That is how it’s done

This perception of equality reflects Murray’s conviction that ‘most knowledge / in our heads is poetry’ and that in this poetic understanding of life is the active recognition of God. 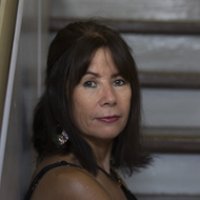 Fiona Capp trained as a journalist before working as a freelance writer and university tutor in English, journalism, and novel writing. She is the author of three works of non-fiction including the award-winning memoir That Oceanic Feeling, and three novels. Her most recent book, My Blood's Country (2010), explores the landscapes which inspired Australian poet Judith Wright.