An Open Swimmer by Tim Winton

A sympathetic reader might feel that Tim Winton, winner of The Australian/Vogel Literary Award, is a victim of one of the unkindest tricks Fate can play on a writer, with the publication of his first novel, An Open Swimmer, at the age of twenty-one. A first novel from a writer of this age is typically seen as, a ‘young man’s book’, full of the gaucheries and immaturities of the precocious, and even if a success, it is an albatross around his neck for the rest of his career. The best one can hope for is a moderate success, substantial enough to start a career, but not either brilliant enough or bad enough to determine its direction from then on. Fortunately, Tim Winton’s first novel does not neatly fit this stereotype.

An Open Swimmer is set in the south of Western Australia. its action revolving around the sea, fishing, and the bush – and it is rich with its sense of region. It is, in some respects, about being young: it charts the quest for meaning undertaken by its main character, Jerra, as he approaches adulthood; Jerra spends much of the novel testing the waters of experience as if he has a choice about entering them; often the view of reality we receive has the clarity and simplicity of innocence. However, Winton distances himself from his character’s immaturity, viewing his introspections with detached respect, while placing the self-destructive anxieties which haunt Jerra as stages through which he must find a passage. Jerra is no Holden Caulfield, and the romanticism of the quest motif in the narrative is qualified by a realist’s sense of acceptance. Always, too, Winton is in control of his language, deftly manipulating the emotional registers without distortion or insistence.

It is the surface of Winton’s writing that is, initially, the most impressive feature of the novel. Apparently unambitious and naturalistic, the prose nevertheless provides access to a wide range of association and meaning; Winton’s close affinity with his natural context provides him with an inexhaustible facility for finding the right location for the idea, mood or reflection he wishes to release. Stylistically, his continual checking of personal experience against the indifference of nature is a distinctive feature; the sense of balance and poise in his writing derives from the continual movement from self to surrounding, from the inner to the external world. The process is tentative and suggestive, but not informal; rather, the patterns and symbols which organise the book’s thematic substance are carefully woven into a dense fabric of meaning and suggestion which is both technically impressive and rewardingly rich in implication.

The dialectic structure reflects a thematic position which explores the acceptance of limitations, of contingency, while remaining open to possibility. An argument about kinds of ‘freedom’ is ‘implied in the structuring of Jerra’s dilemmas. The novel tends to fence Jerra in, not physically but psychically, as his apparent freedom in the bush is limited by the guilt he feels for his ambiguous relationship with his Aunt Jewel, his confusion about the incompleteness of his participation in his own past, and even the sense of claustrophobia and mortality which can suddenly envelop him when he is at his most free, in the ocean. Jerra has to learn to deal with these problems without resorting to escape, denial or the fearful panic which results in his grotesque mutilation of a groper. The ‘open swimmer’ of the title is Jerra’s mandala, the antithesis of the ‘cave-fish’, and the paradigm of the novel’s recommended negotiation between freedom and limitation, withdrawal and acceptance.

An Open Swimmer allows these thematic implications to emerge, rather than imposes them on the material, and its form always seems to suggest the virtue of scepticism as it balances human pretension against the variety and scale of nature; it is impressive to see a young writer sufficiently mature in his craft to use formal strategies as a means of sophisticating and disciplining the articulation of his vision, and this ability alone would make An Open Swimmer a most interesting and promising début for Tim Winton.

Graeme Turner is an Emeritus Professor at the University of Queensland and one of Australia’s leading cultural historians. 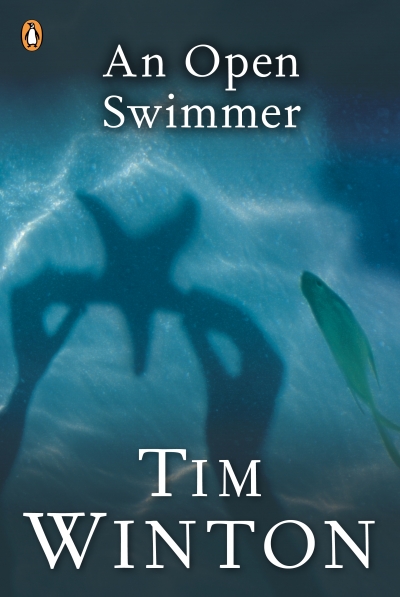