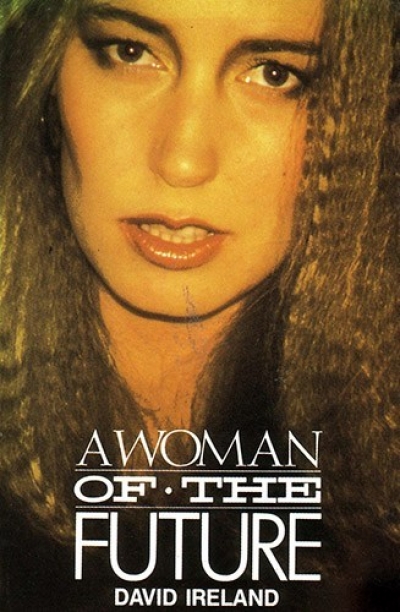 Like Ireland’s previous literature, A Woman of the Future is partly a political and social allegory. Set in Australia in the near future, its society comprises the Servants (the limited élite who are employed in world of high unemployment) and the Free – the out of work majority who devote their time to finding ways of using time. Most American reviewers of the book have seized on this as the most profound and important meaning of the work. Personally, I find it simplistic, but fortunately it plays but a small part in the overall themes.

Structurally, the book is a series of short fragments rather like a diary interspersed with snatches of playground and street sons and aphorisms, school compositions and other bits and pieces. Though they are arranged chronologically, there is no cohesive narrative – and this is a heuristic rendering of the book’s major themes; notions of permanence, transience, stasis and change. Life is kaleidoscopic and fragmentism and the book’s stylistic mode suggests this.

Alethea’s father, one of the ‘privileged’ servants is an actor employed for years in a play in which he dies every day. The play is called Changes and increasingly he feels that in the acting out of death he really does die – that the person who leaves the play at the end of each day has died, and that it is a new man who each day faces the role again. Ireland is concerned with ideas of atomism and ontology, and queries the notion that there is a central essential psyche. The novel is peppered with various people in bizarre stages of evolution or metamorphosis: people’s internal organs begin to grow on their outsides, leaving a hollow centre; men grow coffins from their bodies; a rabbit grows out of a boy; roses take root in a boy’s armpits, in a mad parody of Adam’s rib; a girl grows a penis from her waist; a motor mechanic begins eating cars (a nice local touch, FJ Holdens specifically); dogs can talk; branches of trees implant themselves on a human body; the fastest boy runner in the school is forced into this achievement because if he stays still his feet grow into the earth. The book is puzzled about whether the earth is the ongoing and permanent abode of transient human beings, or whether people remain static in a forever changing universe.

Alethea Hunt, as a woman of the future, is strong, intelligent, creative, an achiever. In this society of the future, her father is both breadwinner and super-parent, playing the traditional role of mother as well as the male parent. The mother, presumably to Virginia Woolf’s retrospective pleasure, has a room of her own in which she does nothing but write, though nothing gets published and it seems to get her now where. The book alludes to other modes of literature and can be placed in a tradition of absurdism. Like Tristram Shandy, Alethea remembers her own birth and even her period of gestation – and quite early on the book alludes to Sterne in talking of the ‘dear reader’ tradition.

A wider theme presents Alethea Hunt as a symbol of Australia. ‘Woman as earth’ is a common feature of much Australian romantic literature, but Ireland’s treatment takes a new turn. Alethea’s vagina and womb are likened, by herself, to the dead heart of Australia, an idea with, which she is obsessed – as a child taking great pleasure in pouring water into the vast dry centre of a school relief map of Australia. Semen into vagina, presumably. The final and complete metamorphosis takes place at the end of the novel, when as a young woman Alethea begins the process of transformation into a leopard, eventually to take off west towards the centre of Australia.

I suppose in a book as bizarre as this, a leopard is as good an animal as any to change into; a wombat or koala might be more appropriately nationalistic, but perhaps without the necessary stature. Moreover, the leopard has symbolic overtones in literature. In some Roman mythology, the leopard is an attribute of Christ, which becomes a medievalism which Joyce used nicely in Ulysses. And, significantly, as a schoolgirl Alethea becomes convinced that Christ is a woman (‘his forty-day fast – what was that but the ultimate crash diet?’). So her transformation becomes a kind of reincarnation which, like the biblical one, testifies to her immortality and permanence. So from an atomistic and forever changing world, woman emerges as a symbol of eternity. But inevitably, one is reminded of Lampedusa’s use of the leopard in his great novel, with its motif that ‘things must change in order to remain the same’, and one wonders if, after all, Ireland is saying anything new at all about women. That romantic notion of woman as earth, as earth mother, eternal as the universe with her womb as the mystical centre of life, has contributed much towards the oppression of women, and despite Ireland’s experimental fictional modes and imagery, he seems, in the end, to be endorsing a theme as old as literature, and as barren, in its implications for women, as the sterile heart of Australia.

But whatever the ultimate implications of his theme, A Woman of the Future is a powerful work, and perhaps we can take heart in the fact that a male writer is attempting so directly to come to terms with the female experience. It cannot be dismissed as trendy feminist tokenism, and should be read and admired for its acute perceptions, not of political and social constructs for which Ireland is so often praised, but of the nature of the existential condition.