One of the most vivid (and, even today, relevant) descriptions of the music critic’s approach to responding to all those non-literal notes on the page and in performance was provided almost a hundred years ago by Ford Madox Ford, in his memoirs. The anecdote is worth quoting in full:

The other day I attended a concert consisting mainly of the Song Cycles of Debussy setting words of Verlaine. They were sung by an Armenian lady who had escaped from a Turkish harem and had no musical training. She was a barbaric creature who uttered loud howls and the effect was to me disagreeable in the extreme; all the same the audience was large and enthusiastic and the most enlightened organ of musical opinion of today spoke of the performance with a chastened enthusiasm. I happened to meet the writer of the notice in the course of the following afternoon and I asked him what he really got for himself out of that singular collocation of sounds.

He said airily: ‘Well, you see, one gets emotions.’

I said: ‘Good God, what sort of emotions?’

He answered: ‘Well, you see, if one shuts one’s eyes, one can imagine that one is eating strawberry jam and oysters in a house of ill fame, and a cat is rushing violently up and down the keyboard of the piano with a cracker tied to its tail.’

I said: ‘Then why didn’t you say so in your notice?’

He smiled blandly: ‘Well, you see, an ignorant public might take such a description as abuse, and we cannot afford to abuse anything now.’

It may be that some members of the audience at Romeo Castellucci’s highly individual take on, and response to, Mozart’s Requiem, experience something similar. I certainly am aware from conversation (and observation) that some audience members did indeed respond to the stage images with closed eyes. But in doing so they denied themselves the opportunity to see and respond to some of the most evocative, poetic, and, yes, musical images seen on the Festival Theatre stage since Bo Holten’s Operation Orfeo back in the 1990s. 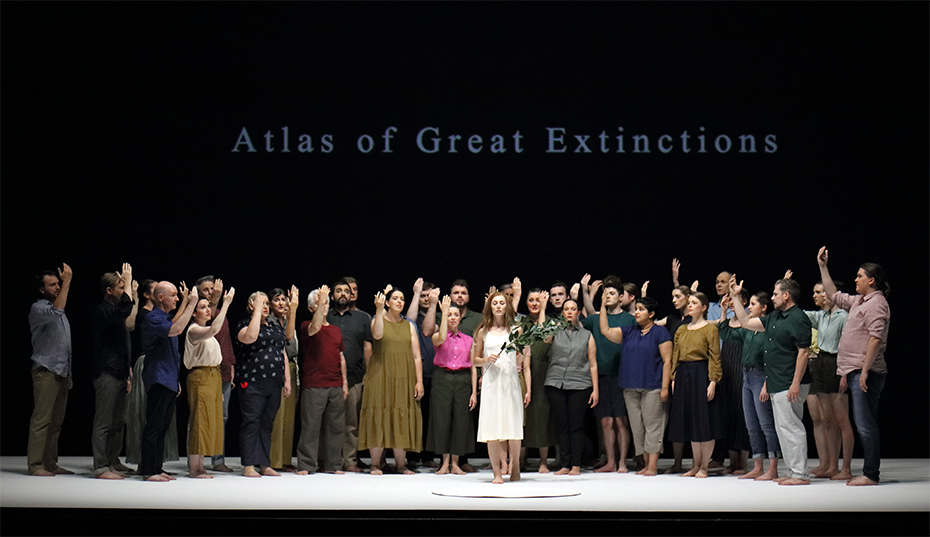 What Castellucci offers with his juxtaposition of theatrical images is a collage/montage of scenes that, while they might not be seen as literal responses (let alone equivalents to the vast range of dramatic and poetic moments in Mozart’s score), engages the imagination and the emotions of the viewer/listener. The progression of moments from death through life’s travails to birth offers a Theatrum mundi that can encompass joy, sadness, lamentation, protest, and quietude.

On the other hand, given the range of theatrical images, the open-minded and -eared viewer has to acknowledge the aptness to this theatre experience of the old catchphrase ‘one picture is worth a thousand words’. Some might find some of the scenic moments that accompany and counterpoint the music (not just of Mozart’s Requiem, but also plainchant and other selections from carefully selected Mozart works) confusing, puzzling, or haphazard. Not this viewer. From the opening moments, when we are presented with the contemporary image of an elderly woman alone on the stage with a bed and a television set, to the sound of a haunting and meditative plainchant, through to the closing image of a very young (real) baby alone downstage centre, while the notes of In paradisum are intoned by a boy treble, the director finds images and scenes that counterpoint, and are a mostly persuasive response to, the music.

Castellucci’s approach may be hinted at by his inclusion of a seemingly arbitrary moment at the beginning, when the woman picks up an orange, holds it, and then places it carefully on the stage. Oranges may seem arbitrary, but they are very much part of the German aesthetic response to Mozart and his work, given that Mozart’s act of plucking an orange from a tree in a duke’s garden is the set-up point for Eduard Mörike’s great nineteenth-century novella Mozart’s Journey to Prague (in this case, for a performance of Don Giovanni).

The act of plucking the orange leads to Mozart’s hearing in his creative imagination a tune from his boyhood and to his endeavouring to recycle this for an important moment in Don Giovanni. In essence, this is analogous to Castellucci’s approach, though in place of the music he instead offers us images springing from his imagination, though these are never intended to swamp the original. 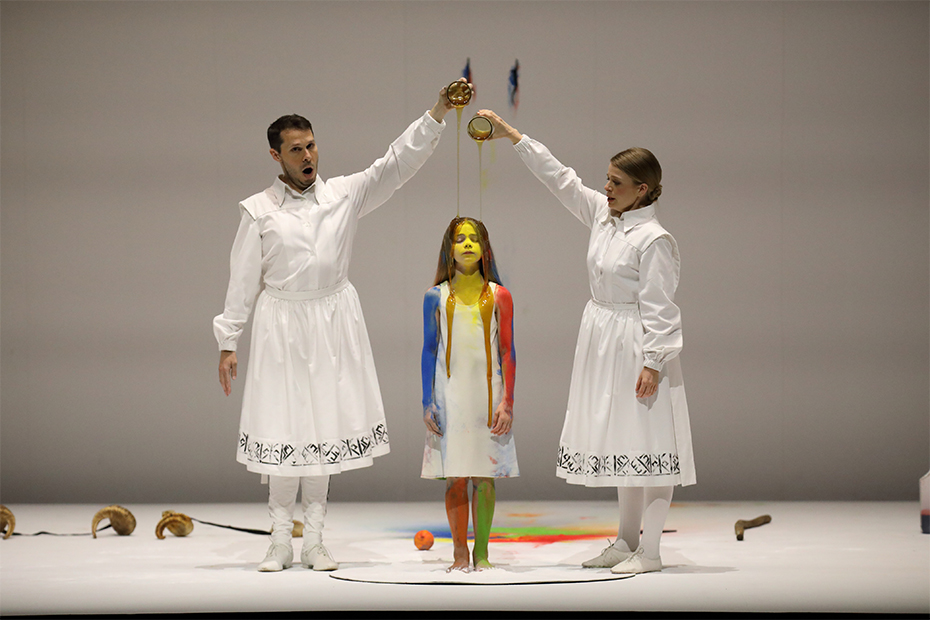 Throughout the performance, it is as if we are invited to reflect on a question posed first by Hegel, and which the composer Hanns Eisler summarises as follows: ‘There is a wonderful sentence in Hegel’s aesthetics, which unfortunately has never been correctly understood. It goes: If, in a piece of music, grief over something lost is being expressed, one must immediately ask: Why is grief being felt, and what has been lost?’

Throughout the performance, while the chorus moves and sings in simple but very precisely choreographed patterns – some derived from Balkan dance, some from more contemporary moves (did I detect a sequence reminiscent of Jerome Robbins’s choreography for ‘Tradition’ from Fiddler on the Roof?), and some suggestive of Pina Bausch – text projections onto the wall of the white-box set remind us of cities, languages, plants, beings, and buildings lost and now extinct – not just religious or political architectural icons, but even Wembley Stadium! While I suspect I might not be the only member of the audience a little puzzled by the introduction of Kangaroo Island and Adelaide’s Botanic Gardens, the effect of the projections was not as disconcerting as it may seem in print.

Over the production’s ninety-minute duration, the contribution from the Adelaide Festival Chorus was exemplary. Evelin Facchini’s choreography was carefully attuned to the non-professional dancers. Throughout, the use of concentric circles and rhythmic hand and body movements never appeared simplistic or dumbed down. The quartet of soloists was impressive, with individual contributions stylish and full of musicality. The Adelaide Symphony Orchestra under Rory Macdonald, though not heard to its best advantage because of the unsympathetic acoustic of the Festival Theatre, was always precise and attentive to the powerful moments in the score, as well as to the more reflective and restrained elements of some of the added music, not a bar of which seemed out of place in this larger palimpsest (and in many respects, the original Requiem is itself a palimpsest). 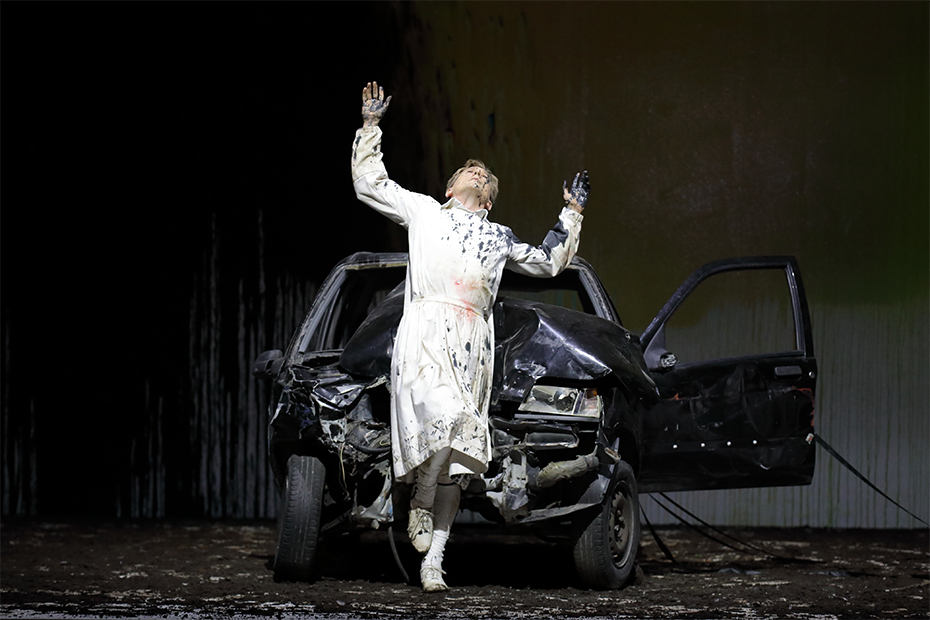 Throughout the performance, even during such confronting moments as the sequence where a crashed car occupies the centre of the stage as successive chorus members strike individual poses across the bonnet (yes, it sounds dire in the description, but is anything but in the staging), one is always aware that the director’s view of the piece is not far removed from that of the composer, who once wrote to his father, ‘Death’s image is not only no longer terrifying to me, but is indeed very soothing and consoling.’ And this only four years before he left his Requiem unfinished.