In an age of blockbusters and ever bigger and grander exhibitions, The Greats: Masterpieces from the National Galleries of Scotland puts a compelling case for 'less is more'. This model exhibition demonstrates how satisfying a relatively small exhibition can be when the right works are chosen and installed handsomely. The Greats – comprising forty-one paintings and fewer drawings – feels much larger than it is. There are seventy artists, drawn from the end of the fifteenth century to the beginning of the twentieth.

Sydney is the final destination for this touring exhibition from the National Galleries of Scotland (NGS), after stops at the de Young Museum in San Francisco, and the Kimbell Museum of Art in Fort Worth. That the NGS has lent many of its 'destination' pictures is due to a building project in Edinburgh to extend the gallery there.

The Greats, with its who's who of artists since the Renaissance, offers a kind of succinct history of European painting. Some of the works are justly considered the finest by the individual creators. Artists and art-history students will be familiar with many of the individual pictures.

The exhibition opens with a splendid room centred on Botticelli's The Virgin adoring the sleeping Christ child (c.1485), flanked by admirable paintings of mythological subjects by Titian and Veronese. We are thus introduced to two of the major themes that shape the history of European art: scenes from the Bible and from ancient myths. Drawings are sensibly displayed on angled boards that encourage the viewer to scrutinise them closely and give (as much as is possible with Old Master drawings in an exhibition) a sense of what it must be like to hold them for viewing. There are drawings by Leonardo, Raphael, Titian, and Goltzius.

The next room is notable for a painting by the young Velázquez, An old woman cooking eggs (1618). Velázquez depicts the said old woman and a young boy and infuses the everyday kitchen objects with meaning, giving them a quasi-religious significance. Other paintings of note in this room include an allegory by El Greco and Adam Elsheimer's small and exquisite The stoning of Saint Stephen (c.1603–04), the bleeding saint caught midway between stonings and the route to martyrdom.

'The Greats: Masterpieces from the National Galleries of Scotland puts a compelling case for "less is more"'

The Golden Age of Dutch painting – Rembrandt, Vermeer, Jan Lievens, Frans Hals, Gerrit Dou – is dominated by Vermeer's largest painting, Christ in the house of Martha and Mary (c.1654–55), his only surviving one with a biblical subject. This early Vermeer is worth seeing in its own right; it is quite different from his subsequent domestic scenes with which we are so familiar. Opposite is Rembrandt's A woman in bed (1647?). Speculation that this may be on the biblical subject of Sarah and Tobias is supported by the finely worked gold headdress, suggesting a bride. 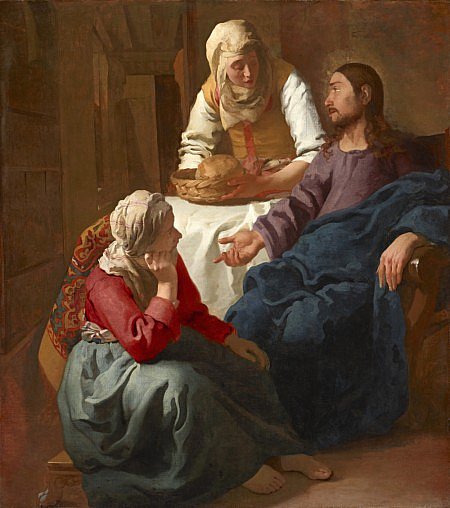 Christ in the House of Martha and Mary (1654-1656) by Johannes Vermeer (National Galleries Scotland)The collection really comes into its own in the eighteenth and early nineteenth centuries. Watteau's Fêtes vénitiennes (1718–19) shows the artist at his best, with an almost mystical gathering of figures in an endless cycle of love and betrayal. There are fine paintings by Boucher and Greuze, the latter's Girl with a dead bird (1765) being one of the artist's most famous. Regardless of whether the subject is mourning the dead bird, this is a compelling study in grief. Elsewhere in this room is a shimmering work by Guardi, The Piazza San Marco, Venice (c.1770–75).

The development of British portraiture during the eighteenth century is well presented with the charming triple portrait, The Ladies Waldegrave (1780–81) by Sir Joshua Reynolds and by two of the most famous pictures in the NGS collection, Allan Ramsay's superb portrait of his wife and Sir Henry Raeburn's wonderfully odd Reverend Robert Walker skating on Duddingston Loch (c.1795). It would have been good to see Gainsborough's The Honourable Mrs Graham, perhaps the artist's most dazzling swagger portrait, but the accompanying catalogue reminds us that it came to the NGS on the condition that it never left Scotland. Instead we are given a fine portrait of John Campbell, 4th Duke of Argyll (1767) in peer's robes, a work that demonstrates the artist's bravura brush technique, and a terrific early landscape. Other British landscapes worth noting here are Constable's The Vale of Dedham (c.1827–28) and a series of watercolours by Turner, John Sell Cotman, and John Robert Cozens.

The culmination of the swagger portrait tradition in the show is John Singer Sargent's Lady Agnew of Lochnaw (1892).  The sitter's intelligent stare challenges the viewer to approach. Gertrude Agnew, languid on a Louis XV armchair against a Chinese hanging, is dressed in a white tea gown, itself a study in brush strokes, sashed in purple.

In many such shows there are highs and lows – but not so here. The high bar set in the first room is matched throughout. Perhaps the only room that some might find less appealing is the fascinating one devoted to Scottish painting. This mimics the octagonal red felt-lined and green-carpeted rooms of the NGS. But here too there are great rewards – a strange, complex history painting by Landseer, a marvellous proto-Pre-Raphaelite painting, Francesca da Rimini (1837) by William Dyce, views of Edinburgh, and more.

Frederic Edwin Church's huge and dramatic painting Niagara Falls, from the American side (1867), is displayed in its own bay, which accentuates its cinematic quality and almost immerses the viewer in this sublime subject.

The final room covers the French nineteenth century: Corot, Pissarro, Gauguin, Degas, Monet, Cézanne, Seurat. While the names read like an embarrassment of riches, it is the exemplary quality of the individual works that make this exhibition. It underscores the importance of exercising strong critical judgement when acquiring works of art for public collections and selecting the finest works by the artist, not settling for second best.

The installation is most sympathetic, with a mixture of studied understatement and grand gesture to the Playfair interiors of the NGS. Playfair's NGS, with its series of octagonal rooms, is one of the great nineteenth-century gallery spaces. 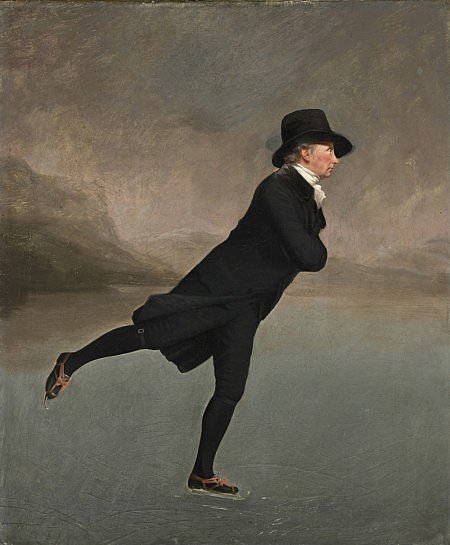 Reverend Robert Walker (1755-1808) Skating on Duddingston Loch by Sir Henry Raeburn (c.1795) (National Galleries Scotland)The elegant exhibition design, by Richard Johnson, with a combination of blocked views and focal points, uses the spaces to encourage the visitor to stop and engage with the pictures rather than being propelled to the inevitable souvenir shop.

The Greats is accompanied by a handsome publication that gives an introduction to the NGS and its collections, and contextualises the works. No one in Sydney should miss this superb exhibition, and interstate travellers are encouraged to see it too.