‘Down at the Dump’ is the final story in Patrick White’s 1964 collection, The Burnt Ones. It begins with a colloquial ‘Hi!’, marooned on the story’s first line, and ends with a short, unpunctuated paragraph, intensely poetic, that recalls James Joyce at his least opaque: ‘The warm core of certainty settled stiller as driving faster the wind paid out the telephone wires the fences the flattened heads of grey grass always raising themselves again again again.’

It is between these two poles – the starkly vernacular and the uncompromisingly lyrical – that Brink Productions’ adaptation of ‘Down at the Dump’, astutely retitled The Aspirations of Daise Morrow, sits. Though softened here by director Chris Drummond’s sentimental touches, it is a familiar place for admirers of White’s unfashionably eloquent works for the stage.

So rarely are these works produced nowadays that I thought it perverse at first of Drummond to choose to adapt one of White’s stories rather than to revive, say, Big Toys (1977) or Netherwood (1983), which, comatose, await the resuscitation of a director with a vision. This, after all, has been the path of most of the theatrical success stories that have emerged from White’s oeuvre, including that of ‘A Cheery Soul’, another story from The Burnt Ones (1964), overhauled multiple times by Neil Armfield in the 1990s and early 2000s.

But it is not hard to see why Drummond was drawn to ‘Down at the Dump’. It takes place in Sarsaparilla, the same washed-out, pre-1960s suburban phantasmagoria on which White frequently, and fruitfully, turned his acidly satiric gaze. It is also innately dramatic, seamed with a Shakespearean dialectic of ill-fated lovers, and preoccupied with the transcendent: love, sex, and death.

The narrative of both story and play hinges on the latter. Cheery soul Daise Morrow, sister of straight-laced Myrtle, has died. The community gathers to mourn her, but there are ‘murmurings’: the Whalleys, bottles of beer in tow, want to pick over the dump, separated from the cemetery by ‘a couple of strands of barbed wire’; Myrtle’s daughter Meg – having, it seems, inherited her aunt’s lust for life – seeks out the eldest Whalley boy, Lummy, for some hot-blooded fun. 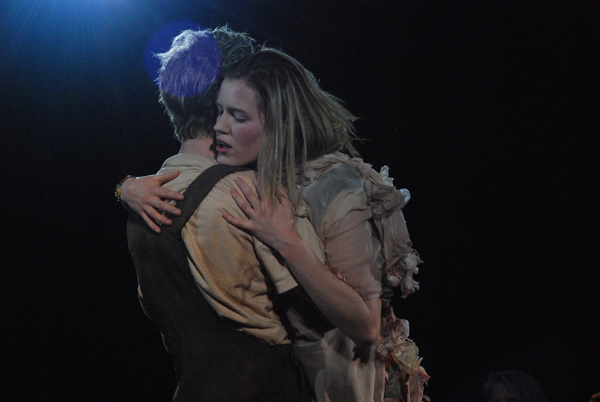 All of this has been exported from White’s story in a surprisingly direct fashion. A great deal of its thickly poetic prose makes it to the stage intact, which is both a blessing and a curse. Its scrupulous rhythms make it a joy to hear spoken aloud – after all, a line like ‘Flies clustered in irregular jet embroideries on the backs of best suits’ is going to sing wherever it ends up – but some of its intelligibility is lost. This is partly due to the acoustics of the space and partly because the text’s density occasionally defeats the actors, lines burbling into shapeless indiscernibility. The other difficulty is the situating of White’s voice – in the story, as in much of his writing, a complex fusion of first- and third-person perspectives – which, not entirely reconciled to the demands of the stage, blurs the line between internalised and externalised storytelling modes. The cast’s efforts to tease apart dialogue, interior monologue, and exposition seem to drain the play of energy early on.

‘It takes place in Sarsaparilla, the same washed-out, pre-1960s suburban phantasmagoria on which White frequently, and fruitfully, turned his acidly satiric gaze’

In this respect, Drummond has asked much of his actors – especially Lucy Lehman, appearing here as Meg and an ethereal Daise, in her first professional production – but each handles their multiple characters, less cartoonish than White’s familiar grotesques, with commendable skill. Kris McQuade’s Mrs Whalley and James Smith’s Lummy are especially enjoyable, both actors inhabiting these roles with a humanising attention to their foibles. Paul Blackwell, as the laid-back Wal and a fussing, Barry Humphries-like Myrtle, impresses with a similar fidelity to White’s sketchy but nevertheless sympathetic characters. Lehman, despite lacking the assurance of the rest of the cast, capably navigates what is perhaps the widest range between roles played by the same actor, the contained, unworldly Meg at one end, the irrepressible Daise at the other. She doesn’t, however, always seem to know quite what to do with her body. Her great strength is her voice, the plunging shift in pitch between Meg and Daise one of several impressive touches in this department. 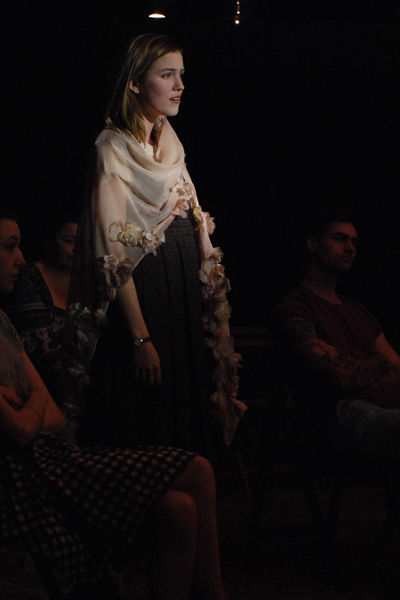 Michael Hankin’s in-the-round set, harmoniously lit by Nigel Levings, is a gorgeous, sensory evocation of White’s Australia. Underfoot is an expanse of real grass, sprinkled with leaves that crackle as the actors weave their way in and out of the circles of folding chairs in which the audience is seated. Overhead, stretched across the ceiling and fading into an existential blackness at its edges, is a vast, off-white canvas of sky. As with the rustic, distressed costume design, Hankin notes in the program that he drew his inspiration from the mid-century Australian painters Sidney Nolan, Arthur Boyd, and especially Russell Drysdale. A smell like linseed oil hangs in the air, recalling weekend cricket and the thick yet faintly sweet atmosphere of a typical suburban shed. The feel, ultimately, is a communal one, warm and welcoming, like a town hall gathering to which we’ve all been invited to discuss some pleasingly unimportant matter.

Sharing the space with us are the four members of the Zephyr Quartet, including musical director Hilary Kleinig. Seemingly without pause, the group accompanies the action with a gentle chamber score that, if it flirts with over-romanticism, then at least is fully engaged with Drummond’s overall scheme – one that, by underscoring his poetry and humanity, reveals to us an unfamiliarly compassionate White. This doesn’t feel like an imposition – it is all there in the story, even in Daise’s very name – but rather like further proof of what can be achieved in the marriage between White’s words and a lucid directorial concept.

I suspect the production won’t hit its stride until towards the end of the run, but Daise’s aspiration, delivered from the grave, is already clear enough: for us to seize the day, and to know that ‘death isn’t death, unless it’s the death of love’.

The Aspirations of Daise Morrow, directed by Chris Drummond, from the short story ‘Down at the Dump’ by Patrick White. Produced by Brink Productions and presented by Adelaide Festival Centre. In the Space Theatre until 24 October 2015. Performance attended: 14 October.