The pleasures of looking at pictures from a young age inspired Albert Ullin. At the opening of this exhibition to mark his donation of eighty works by Australian children’s book illustrators to National Gallery of Victoria, he expressed the hope that they would be recognised as mainstream art.

In 1960, Ullin established the Little Bookroom in Melbourne: it was the first dedicated children’s bookshop in Australia. Recounting the history of The Little Bookroom in Paper Empires (2006), he wrote: ‘It was not until the [Children’s Book Council Picture Book of the Year] 1974 award to Ron Brooks for his unique illustrations for The Bunyip of Berkeley’s Creek, with text by Jenny Wagner, that the Australian picture book came into significance.’ It is fitting, then, that the Bunyip headlines this exhibition in tandem with Peter Pavey’s domesticated fire-breather from One Dragon’s Dream (1978). The Bunyip seems to stare through the window of NGV’s Studio straight at the pink-striped face of another 1970s icon on show at ACMI – David Bowie Is.

Entering the exhibition, we find an introduction to Ullin as a collector and as friend and mentor to many of the artists. Among the personal items are a trifold illustrated poem by Terry Denton and a pen-and-ink rendering of the shop in the 1980s by Brooks, then a row of exquisite pictures by Bob Graham, Bronwyn Bancroft, and others.

The Brooks drawing has been reproduced as an entire wall of the Studio. Visitors young and old can pause here, with sculptural boxes as shelving for browsing copies of the books. Story Box Library, which is supporting the current exhibition, have provided two of the stories on an iPad for enhanced viewing and listening. Adults will enjoy the screened video, which offers a peek into the studios and processes of several artists.

Curator Petra Kayser says: ‘The collection…does not claim to be a comprehensive overview of children’s books, but instead shows the diversity of images and stories that form part of our collective imagination.’

The works of Brooks and Pavey sit in the centre of the show. They recall that wonderful decade of flowering talent with delicate tracery and precision of colour. The Bunyip is as familiar and comforting as a sofa in autumn tones from the same era.

In the same room, the draughtsmanship of Robert Ingpen and John Nicholson, and a painting by Pat Torres, which positively glows, are on display. Further along, Ted Greenwood’s No Enemy Found this Egg (1981) is a modest treasure worth looking out for. Children’s book illustration, framed page by page on a wall, tells part of a story. Visitors will be surprised by the vibrant colours, firmness of line, and sheer diversity of the work.

Process is represented in the show by Graeme Base’s study for The Other Guests, alongside the finished artwork. The video of Leigh Hobbs drawing his character Mr Chicken had a child visitor looking from the moving image to the finished drawing on the wall and back again. There are tantalising glimpses of the maker’s hand in many of the works, in erasures and fixes. 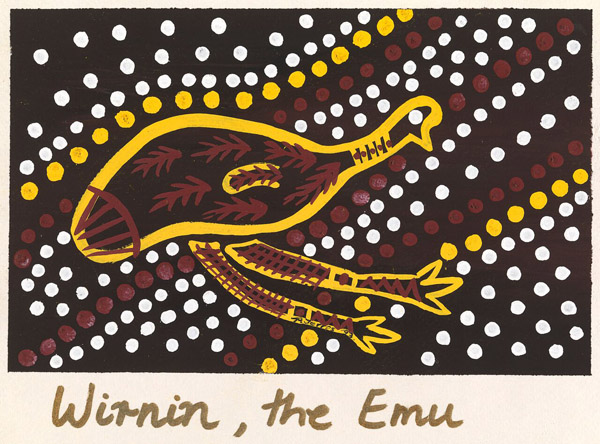 Other highlights include Julie Vivas’s children dangling with monkey abandon, Mullins’s exuberant collage dinosaur alongside lesser known but important artists Madeleine Winch and Sandra Laroche. Work by Harmut (Hottie) Lahm, from 1941, represents both the start of Ullin’s life as a collector, and the all too brief lives of most children’s books.

Judging by the height of these exhibits, the exhibition is intended for adults. This might frustrate some children. Mullins’s delectable gingerbread rocking-horse was hung too high for me to examine in detail, and Jiri Tabor Novak’s ‘Down, down, down’ was, ironically, placed so far up the wall that it couldn’t be looked at easily.

A drawing studio has been created so that young visitors can respond to creations by Bob Graham and Leigh Hobbs with characters and narratives of their own. (The NGV reports that in 2014–15 it had 283,000 child visitors.) Adults, if they don’t care to join in, can watch the screened interview between Jennifer Byrne and Albert Ullin nearby.

When I visited, a father with two children was examining work by Shaun Tan and reading aloud from the information panel to the elder. The preschooler, fidgety, said, ‘But I want to see the dragon. Where’s the dragon?’