The fact that two of Australia’s major theatre companies are performing Endgame concurrently is, one hopes, merely a coincidence and not a reflection on the national Zeitgeist, for the play is one of the bleakest works in Samuel Beckett’s not exactly sunny canon. If Vladimir and Estragon in Waiting for Godot cling desperately to some hope, their counterparts in Endgame, Hamm and Clov, have long since given up. It has been said that Waiting for Godot is a despairing play about hope and Endgame a despairing play about despair. But it is more accurately a play about the aftermath of despair, the torpid calm that comes after one has passed through the slough of despond and all that is left is to fill the hours with bickering and pointless gamesmanship. As Hugh Kenner has pointed out, Endgame is a play about performance – the performance of despair rather than despair itself. If we believe in a chaotic godless world, ‘whatever we do, then, since it can obtain no grip on our radically pointless situation, is behavior pure and simple; it is play acting’.

It is this aspect of the piece that Andrew Upton’s brilliant production emphasises. In Nick Schlieper’s superbly lit, imposing set, the blind, chair-ridden Hamm and his mutinous servant Clov play out their charades, waiting for the end which they sense is near, while Hamm’s parents, Nagg and Nell, appear from their bins like a couple of dusty jack-in-the-boxes demanding food, and reminiscing.

Schlieper’s grey set soars like a weird watchtower with two set sets of windows high up. Seemingly conical in shape it resembles the interior of a wizard’s hat. The two rubbish bins, which contain what is left of Nagg and Nell, are placed downstage.

There have been many comparisons made to the relationship between Hamm and Clov. Among them Lear and the Fool, Mind and Body, Hammer and Nail. Beckett himself muddied the waters by at one point contending that they were Vladimir and Estragon in old age and at another that they were in fact a portrait of himself and his long-term partner, later wife, Suzanne Déchevaux-Dumesnil. In this production for me there were strong echoes of Prospero and Ariel. Beckett makes reference to The Tempest in the play. At one point Hamm quotes Prospero and towards the end he may not break his staff but he emphatically throws it away. 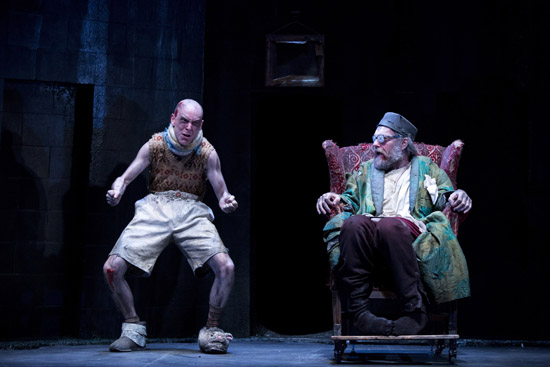 Hamm is often played as a bullying, tormenting and tormented despot, but that is only a part of him. Weaving’s Hamm is wonderfully fantastical. Denied the use of his eyes and legs, he makes the most of his arms, hands, and marvellously expressive fingers, stabbing the air with them or fluttering them like the ripples on a lake. Even his tongue gets a moment in the spotlight. But it is the glorious Weaving voice that truly commands the stage. From sonorous boom to almost whisper, he coaxes every ounce of poetry from the text without ever seeming ‘poetic’. He initiates the often played routines sometimes with relish and at others almost in spite of himself. At the few moments when the anguish that he tries to keep at bay surfaces, he is shattering. This is a great performance and a pinnacle of Weaving’s distinguished career.

If Tom Budge’s Clov is an Ariel figure he is a grotesque misshapen one. Surprisingly eschewing the stiff staggering walk Beckett specifies in the script, Budge skitters around the stage like a hunched over Nosferatu. Less bitter than most Clovs, there is an innocence about him which Weaving’s Hamm gleefully exploits, but when he does erupt he is momentarily formidable. He expertly juggles the huge ladder which he uses to peer out of the high windows, and his routine with the flea powder he uses on himself is a splendid piece of clowning. 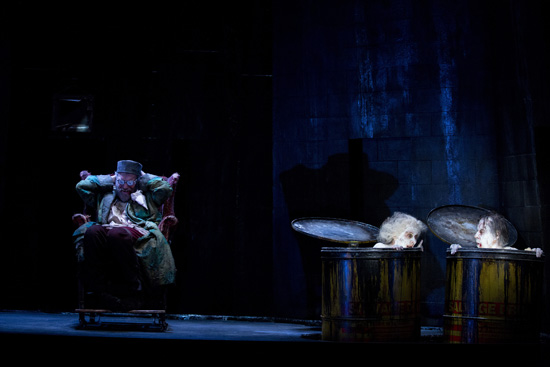 In their recollections of past happy times, Nagg and Nell are our only link to the outside world. Sarah Pierse and Bruce Spence play these scenes with a tender rapport which highlights the isolation of the two main characters. At other times, Spence plays up the infantile demanding side of Nagg but the ‘accursed progenitor’ proves himself at times more than a match for his son. ‘Why did you engender me?’ Hamm asks. ‘I didn’t know. … That it’d be you’ is Nagg’s reply.

An artist for whom the verbs to create and to fail were synonymous, Beckett was surprisingly positive about the original French version of the piece and it remained a favorite work for the rest of his life. This production does him proud.

Now Messrs Upton and Weaving, can we have Krapp’s Last Tape please?

Endgame by Samuel Beckett, directed by Andrew Upton for the Sydney Theatre Company, and performed at the Roslyn Packer Theatre until 9 May. Performance attended 9 April.