‘Blood has a freshness of tone and determined vigour that are frequently lacking in the work of many male Australian writers.’

‘Carroll has established himself as one of Australia’s finest contemporary novelists. Despite accolades and awards, his oeuvre remains less revered than it deserves to be. Perhaps his most mesmerising skill is his capacity to depict the worlds within his characters’ heads.’

‘Descriptions of Dawe’s work that focus on his mastery of Australian speech registers and his sympathy with suburban folk often, unconsciously, sell him short. He can be a very sophisticated poet.’

‘Funder’s observations of the gradual assertion of the Nazis’ grip on Germany ring uncannily true ...’

Jo Case reviewed All That I Am (Hamish Hamilton) in October 2011.

‘This bold book, with its lucid prose and vivid illustrations, will be discussed for years to come. It is not original in the narrow sense of the word, but it takes an important idea to new heights because of the author’s persistence and skill.’

Geoffrey Blainey reviewed The Biggest Estate on Earth: How Aborigines Made Australia (Allen & Unwin) in November 2011.

‘... this act of re-entering the past is an important one. Grenville’s extraordinary trilogy is a major achievement in Australian literature.’

‘Still, even with its northern myopia, this is a book with a wise core, written by someone who has learned that the responsibility of power brings both constraint and motivation and that reaching out to the other side has human, as well as strategic, benefits.’

Australian Poetry since 1788 is a compelling book and a quite exemplary anthology. Australians have been kept – or have kept themselves – to themselves for too long.’

‘Despite its formidable length, this is a real page-turner. McKenna compels admiration not just for the depth of his research and the unassuming grace of his prose, but also the skill with which he constructs his narrative.’

‘The Cook is made of the world, made of menus and daydreams and lust. From this material, so commonplace and so frequently given the most everyday treatment imaginable, Wayne Macauley has written a great book.’

‘It is the vengeful thread that hides behind the notion of “crusading” that Manne reveals in his Quarterly Essay, and I hope that the paper takes account of the criticisms he makes.’

‘Foal’s Bread is a grand, bittersweet romantic saga, at once laconic and mystical, tragic and optimistic ... How marvellous to hear her unique voice again.’

‘All of Alex Miller’s wisdom and experience – of art, of women and what drives them, of writing, of men and their ambitions – and every mirage and undulation of the Australian landscape are here, transmuted into rare and radiant fiction. An indispensable novel.’

‘In the imagination of Australian readers, Edith Campbell Berry may come to stand for her country and her century in the same way that Richard Mahony did.’

‘Nixon was an important agent of change in policing methods, and hopes that her actions on Black Saturday will not overshadow the achievements of the rest of her career. She adds, “Perhaps this is a vain hope.”’

‘It is difficult to think of another poet who has more consistently and resolutely fashioned beauty from flat, broken English ... Ryan’s astonishing body of work, now newly and selectively gathered in a single volume, is both tonic and rebuke.’

‘At its best, Zable’s writing reminds me of W.G. Sebald’s – enigmatic, self-aware, exploratory. In his hands, storytelling paradoxically becomes a salve for the unhealable wounds it describes, memory brings home the shock of loss – but is also the only way of reaching the dead – and music is a trace that both recalls exile and undoes it.’

Purchase one of Chong’s cover portraits and support ABR

Australian Book Review – to celebrate its fiftieth year – is offering a series of portrait prints of distinguished writers and cultural figures by the noted Australian artist-designer W.H. Chong. Throughout 2011, several ABR covers featured a superb original print – the perfect adornment for a personal library, and a fine gift for an admirer of the individual subjects. The series began in February, with Paul Kelly (now SOLD OUT), and continued with Dorothy Hewett, Patrick White, Julian Assange, and Kate Grenville, and David Malouf.

Each portrait is available exclusively from ABR. The unframed prints – presented in a limited edition – are signed, numbered and individually hand-coloured by Chong.

Each print is priced at $150 for ABR subscribers – $195 for non-subscribers. Postage and handling is an additional $15.

Place your order soon – these editions will sell out fast! Orders can also be placed for the complete set. To order, call (03) 9699 8822, or complete the order form (see link below). 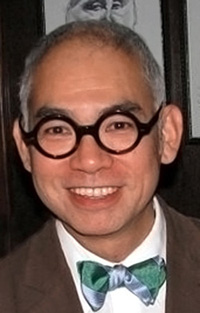 ABR readers are very familiar with Chong’s work. He has designed more than 600 book covers (many featuring his own artwork) over the last twenty years. He was the designer of ABR’s covers from 2001 to 2008. He also writes a highly popular culture blog for Crikey: Culture Mulcher.

Chong – a Patron and long-time supporter of the magazine – has generously waived any income from the series. Any profits will go to ABR to assist it in its publishing and programs.

In recent years Chong has turned to portrait drawing. In 2010 he chronicled the first year of the Wheeler Centre for Books, Ideas and Writing. You can see the drawings at http://www.flickr.com/photos/wheelercentresketchbook.

'What is Australia, anyway?' – Patrick Allington

Copyright and the Internet – Colin Golvan

Strangers in the know – Geordie Williamson

Changes at the National Gallery of Australia – Christopher Menz

Having it both ways – James Ley

Devil in the detail – Kate Holden

Fighting on the beaches – Robin Prior

Once and Australian – Brigitta Olubas

Some kind of ghost – Kate Holden

The last king of Poland, the glass king of France – David McCooey

The trials of Helpmann – Lee Christofis

'None but the Brave': The Costello Memoirs – Neal Blewett

'Missing From My Own Life' – Elisabeth Holdsworth

ABR/La Trobe University Annual Lecture: 'The Ups, the Downs: My Life as a Biographer' – Hazel Rowley

The Sound and the Fury: Uneasy Times for Hacks and Critics - Peter Rose