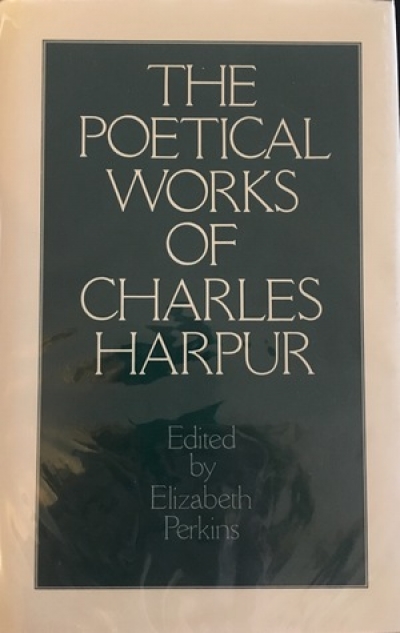 The Poetical Works of Charles Harpur

It is 116 years since Charles Harpur, Australia’s first poet of real eminence, died with his own collection of his works unpublished. Except for a couple of small selections – the most recent of which, made by Adrian Mitchell in 1973 and containing only about 120 pages of the poetry, was the most comprehensive – and the infamously corrupt 1883 ‘collection’, it has remained so. This has been a blot on the reputation of Australian critical and academic workers and a loss not only to Australian literature but to Australian history. Now Elizabeth Perkins, of the English Department of James Cook University, has handsomely remedied a long injustice.

The task was a difficult and long one – as Mitchell saw it would be in making his own selection. Though Perkins lays little emphasis on the difficulties of collating, editing and preparing from the Mitchell Library manuscript collection the 977 pages of verse the book contains, a task from which Mitchell recoiled as ‘enormously demanding’, the book stands as a critical and scholarly achievement for which we ought to be properly grateful.

The basis that Elizabeth Perkins adopted for the choice of versions was Harpur’s own ‘final transcription’ for a collection intended for publication in England, but which never reached that country – and would probably have been rejected as a colonial piece of presumption if it had. Other poems and variants not included in these ‘Major Manuscripts’ and therefore left ungrouped by Harpur himself are arranged by editorial decision, and the editor emphasises both the problem of dating many of them or their variants, and the nature of this collection as a first and non-definitive – and non-inclusive, since much of the prose and notes had to be left on one side – presentation of Harpur’s work.

Harpur was long dismissed from critical consideration on the basis not only of the 1883 volume but of his lifetime reputation as an emancipist reformist, good and grey perhaps but little else. In days when Tennyson and Swinburne were the critical touchstone in Australia, Harpur’s obstinate Miltonism and neo-dassicism seemed to outdate him in favour of the younger and more lyrical Kendall. His late twentieth-century rediscovery has suffered from the lack of any reliable large collection by which he could be judged. Yet it can be seen from this book that he was not only, as his editor says, ‘an original but curiously representative colonial poet’, but as a member of what Parkes described as ‘the first popular movement in Australia’, a significant historical figure – in spite of the fact that he played little public part in that movement except through a constant hail of political satires, squibs and epigrammatic comments on the political issues of the time. Formal almost always, didactic in tone too often. Harpur was nevertheless a principled, consistent and pointed commentator; Perkins describes him justly as ‘inexhaustibly interesting’ both in his political – satiric aspect and as a more ambitious poet.

Emancipist descent, poverty and the factionalism of such literary circles as Sydney possessed at the time, hampered Harpur from the beginning, and he died bitterly disappointed by his lack of recognition and publication. His lifetime saw much change in the colony – between his eighteenth year and his death the European population of Australia rose from a mere 70,000 to over a million and a half, and the old reformist aims in land reform, independence and self-government were overwhelmed by history. Between Harpur and the writers of the ‘nineties no Australian-born poet expect Kendall emerged – an indication of the way things were going.

Harpur based his hopes for future recognition mainly on his longer poems, but few of these have been available for critical inspection until now. In this collection, we now have a number of them, including the important early ‘Genius Lost’, ‘The World and the Soul’, the early long narrative poem ‘The Kangaroo Hunt’ with its immensely interesting notes, and the extraordinary ‘The Witch of Hebron’, Harpur’s last poem. The latter is so sustainedly unexpected and original, with its psychological and philosophical insights and implications, that is appearance alone would justify the book.

The question of how ‘good’ a poet Harpur is, in his amazingly various roles from satirist to critical parodist (in the Rhymed Criticisms), to topical commentator, to somewhat heavy-handed lyricist and sonneteer to playwright to philosopher to metaphysical speculator to forerunner bush balladist – and maybe other roles as well – will probably be argued for years by protagonists of one or another critical school. What can certainly be said is that in all or most of these he was a first-footer in Australia and not a negligible one in any.

For me, in the longer poems on which he based his hopes for future recognition, the quality which most stands out is his quite remarkable quality of three-dimensional architectonic vision – the juxtaposition and deployment of contrast – light and shade, height and depth, mass and space, and in the moral sphere, good and evil. The modern habit of close textual analysis may very well miss these qualities and contrasts altogether – after all, modern critical equipment lacks instruments and exemplars to deal with them. The second problem for modern criticism is the fact that of all our poets, Harpur most demands to be treated in a social and historical context, and this too is an area which the new criticism deals with with reserve and disclaimer, if at all. Perhaps a new school of literary historians may rescue him from its limitations.

Meanwhile, we have the book, at last. Its typeface is excellent, its layout pleasant, its binding and paper of good quality – it should last out the critics. It would have been useful to have had a checklist of manuscript numbers for reference and comparison with other variants – but in a book of over one thousand pages, one can’t ask for too much. And we, and the long-unsatisfied shade of Charles Harpur, now have the book he has too long deserved.

The Poetical Works of Charles Harpur