It seems fitting that the co-opted electrical substation in Newport, Melbourne should be the site of an enterprising arts space. Formerly it was used to generate electricity for Victorian Railways (it fell into disrepair in the 1960s). Perhaps some residual energy still pulses through the concrete lattice of its red-bricked walls or runs along the arched tops of its double-story windows, investing the art produced, performed, and housed with an extra something. Who knows? Equally nebulous as this supposition is The Substation art space’s 2017 season programming, which includes an eclectic line-up of mixed-media art, music, and theatre. Explorations of history, conflict, and fear sit alongside stimulating and meditative audience immersion pieces, one of which was its season opener: The Long String Instrument, presented in collaboration with Liquid Architecture.

Upon reaching the performance space on the top floor, the audience was greeted with the long strings of the ‘instrument’ itself; two sets of tautly suspended thin metallic filaments spanning more than twenty metres from one end of the room to the other. The audience was on either side. Between the two sets of strings was a space for Ellen Fullman, the creator. Back and forth she paced within the instrument, manipulating the strings to produce overtones that complemented the harmonies of cellist Theresa Wong.

The classical avant-garde pairing performed ‘Harbors’, a piece described as evoking ‘soundscapes, stories, and atmospheres that manifest around bodies of water’ – the sea, one can assume, given the undulating form of the piece, both calm and turbulent. As Fullman slowly paced inside the instrument, arms slightly outstretched, she would stroke the wires, her rosin-coated fingers gently pinching them to raise and lower pitch. One could scarcely believe the depth and breadth of sounds produced by such a delicate-looking contraption and by such minimal movements. Throughout the unbroken one-hour composition, a ghostly organ would pulse like a distant horn in the fog. At times it keened like a whale and descended into the depths; at others it broke the surface to the chattering of seabirds or cascading raindrops, and often it explored darker territory. 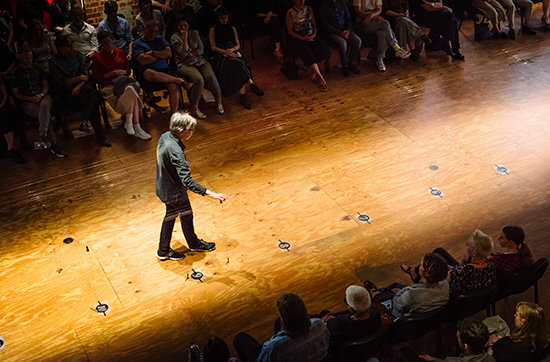 Ellen Fullman began developing her giant gossamer contraption in a studio in Brooklyn, New York more than thirty years ago, and released her first recording Long String Instrument in 1985. In the same year, a shy, softly spoken Fullman appeared in a television interview, for what appeared to be a local morning show in Austin, Texas. Coerced into playing a piece for ‘the folks at home’, she produced a swelling, alien sound incongruous amid the glam pop, shoulder pads and permed hair of the time. Similar, albeit less unconventional, resonances can be found in cinematic scores today, including Hans Zimmer’s Interstellar (2015) soundtrack, which prominently featured a church organ alongside stringed instruments.

The Long String Instrument was as much a physical-performance art piece as it was a trance-inducing recital. Fullman’s pacing was carefully choreographed; she would step forward slowly and reverently, then briskly stride to the next position, causing the audience to swivel their heads, as though watching a slow motion tennis match. Roughly halfway through ‘Harbors’, a motorised spinning disc, which rested against a single string, was switched on. As the instrument gently hummed away, Fullman held a pair of small crosses – as one would hold marionette controls, each with crooked metal wires dangling below – and ran them over the strings. This produced a pizzicato effect, resembling a stringier, more frantic Chinese zither. This was a lively interlude to the overall brooding nature of the piece. Theresa Wong, her accompanist, sat among the audience, close to the ‘head’ of the instrument, armed with a cello and a laptop. Her position made it difficult for audience members further along the same row to watch her – a handicap for those without a musical ear, unable to wholly distinguish between the subtleties of Fullman’s overtones and Wong’s harmonics. A clearer visual cue would have helped in this regard. 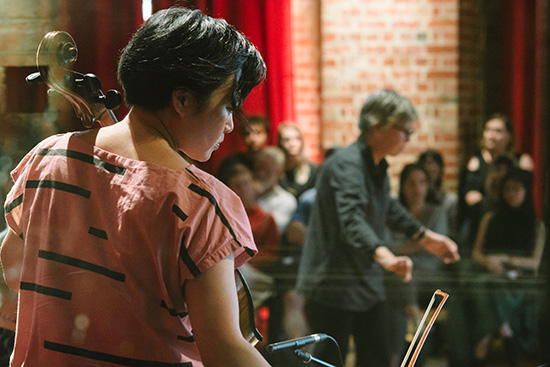 Theresa Wong and Ellen Fullman perform 'Harbors' as part of The Long String Instrument (The Substation, photograph by Keelan O'Hehir)

The slow, meditative nature of The Long String Instrument makes it an acquired taste; some in the audience fidgeted and yawned, while others were still, eyes closed, a hint of a smile on their faces. However the piece was received, Fullman’s mastery of her singular craft is remarkable, and Australian audiences in Sydney, Hobart, and Melbourne have been fortunate to see her. It was an impressive start to the year for The Substation.

The Long String Instrument was performed by Ellen Pullman and Theresa Wong and co-presented by The Substation and Liquid Architecture. Performance attended: 27 January 2017.