The advance publicity for Kip Williams’s production of Oscar Wilde’s novella The Picture of Dorian Gray (1890) makes much of Wilde’s aphorism ‘The only way to get rid of a temptation is to yield to it.’ In the past, Williams has found the fashionable mix of video and live performance pioneered by the Belgian director Ivo van Hove seductive. He has used it brilliantly in his production of Tennessee Williams’s Suddenly Last Summer and less so in Bertolt Brecht’s The Resistible Rise of Arturo Ui. But with his assault on Wilde’s famous work, he has yielded to it with a vengeance.

Williams is right to intuit that Wilde’s story of a beautiful young man who sells his soul so that he can retain the gloss of youth while his portrait withers in his place has much to say about our image-conscious, self-obsessed times. The dying Wilde, who declared of the wallpaper in his final shabby quarters ‘one of us has to go’, would surely have appreciated the Twitter account ‘Room Rater’, and the man who declared of a widow that her hair had grown ‘quite gold with grief’ would have had some mordant comments about programs like Botched. But in the novella he is exploring more than just the desperate desire to retain the glamour of youth and the compulsion to surround oneself with beautiful objects.

As an Irishman and a homosexual in Victorian England, Wilde continually challenged the constraints of that society, ignoring the hypocritical division that required a member of society to have one face for the drawing room and another for the bordello. In the speech that concludes with the abovementioned quote, the fashionable boulevardier, Sir Henry Wotton, the man who corrupts the only too willing Dorian, has this to say: ‘I believe if one man were to live out his life fully and completely … that the world would gain a … fresh impulse of joy.’ ‘The supreme object of life,’ Wilde claimed, ‘is to live’, a statement echoed memorably by Noël Coward, who quipped, ‘Life is for living. It is difficult to know what else to do with it.’ The Picture of Dorian Gray can be read both as a story of the destructive effects of repression and as a morality tale, an investigation into where the search for individual fulfilment might lead. It was this aspect that alarmed its original audience, including André Gide, who described it as ‘the most dangerous product of modern civilisation’. 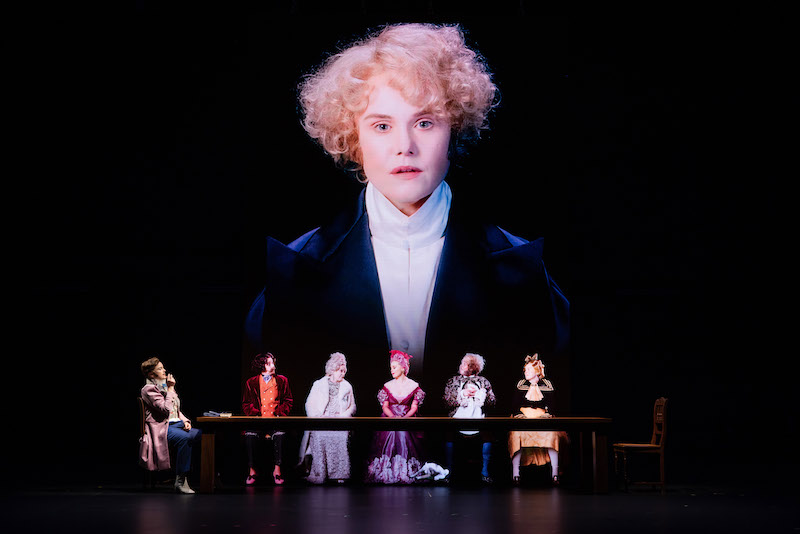 If the first aspect of the work has little relevance in our permissive era, the second is highly applicable to the present time. But Williams’s clamorous production doesn’t really address this or indeed anything else much.

Apart from the addition of a well-filmed race through the woods and an extra murder added to Dorian’s numerous crimes, Williams sticks fairly closely to the plot. By focusing on one performer, the redoubtable Eryn Jean Norvill, and emphasising the theatricality of the piece, Williams certainly underlines the theme of the many faces we present to the world. The play begins promisingly with Norvill nicely delineating the different aspects and voices of Dorian, Sir Henry, and the creator of the portrait, Basil Hallward. But soon the video screens and the flashy effects start to drown out the actual story. Everything becomes cheap laughs and expensive effects. The sub-plot of Dorian’s infatuation with and destruction of the young actress Sibyl Vane is played entirely for comic effect. Later, when the mood should be turning darker, Williams has Dorian launching into Barbara Harris’s number ‘I’m Gorgeous’. Wilde’s work is a curious mixture of witty repartee and gothic horror, and though we get some of the former, the latter is entirely missing until the very end, by which time it is too late for it to have much effect. Indeed, there were only two times when this reviewer felt a sense of dread. The scene at Lady Agatha’s dinner, in which Norvill, as Lord Henry, conversed with herself as a gathering of eccentric characters, and later on when, as Dorian, she reviewed portraits of her ancestors, filled me with the alarming thought that Williams might consider inflicting this treatment on Kind Hearts and Coronets. In his preface to The Picture of Dorian Gray, Wilde says: ‘Those who go beneath the surface do so at their peril.’ No fear of that here.

However, for the opening night of such a technically complex show there were remarkably few glitches. Credit must be given to designer Mary Horwell, lighting designer Nick Schlieper, sound designer Clemence Williams, and video designer David Bergman.

But the ultimate credit goes to Norvill. Whatever one’s feelings about the production, her performance is a tour de force. Racing from character to character, relating to her filmed selves, handling myriad wig and costume changes, she does her best to create some coherence out of this chaos. If she was understandably, given the challenges of her mammoth role, not quite on top of her lines, she covered her lapses brilliantly.

It is the combination of Norvill’s performance and the technical excellence of the production that makes this production worth seeing, but if you want really to experience Wilde’s work, watch the classic 1945 film, directed by Albert Lewin. Or better yet, read the damn book!

The Picture of Dorian Gray, presented by the Sydney Theatre Company, continues at the Roslyn Packer Theatre until 19 December 2020. Performance attended: November 28.