It is hard today to recall the full extent of the furore that surrounded the first productions of Mart Crowley’s play The Boys in the Band. First produced off Broadway in April 1968, a year before the riots at the Stonewall Inn that sparked a new militant gay politics, it quickly became a hit, and was staged in Sydney later that year, where it ran for seven months.

Scott McKinnnon, in his essay ‘The Activist Cinema-goer’ (published in History Australia, 2013: 10:1), wrote:

In a series of articles, the Sydney Morning Herald called the play a ‘trailblazer in frankness’, praised its ‘uncompromising candour’ and suggested that its box-office success was a sign that ‘times have changed’. The ‘frankness’ and trailblazing qualities of The Boys in the Band, however, were not based on praise for a newly liberated attitude to gay people but rather on the play’s framing of homosexuality – and homosexuals – as a significant social problem. Thus, the Herald could express admiration for playwright Mart Crowley’s efforts in revealing ‘the homosexual as a suffering human being’. Praise was also given to the play’s promoters for ‘marking on tickets that [attendance] was at the playgoer’s own risk’ and for ‘emphasising that [the play] is a social drama about a sociological problem’.

After the Melbourne Playbox production in 1969, two of the actors, James Krummel and Charles Little, were prosecuted for bad language, namely ‘fuck’ and ‘cunt’. The magistrate let them off, the police appealed, and they were convicted and fined. William Friedkin’s film, which also came out in 1970, was banned for a short time in Australia. Twenty years later, the play was revived on Broadway (directed by Joe Mantello), and Netflix has now produced a film version with the 2018 Broadway cast. 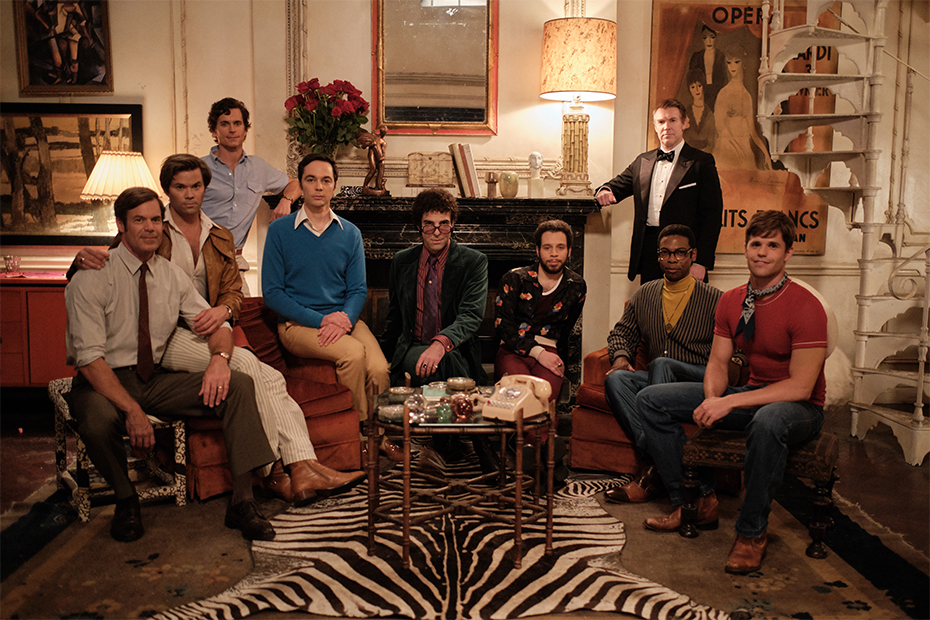 The Boys in the Band (the title comes from the Garland version of A Star Is Born, when Norman Maine tells Vicki Lester she was singing to herself and the boys in the band) is set in Michael’s Manhattan apartment where a group of homosexuals gather to celebrate Harold’s thirty-second birthday. It’s less clear what binds the seven together, but rather like an Agatha Christie house party, they fit a set of easily predictable stereotypes: the neurotic Jew, the very campy queen, the former straight man who found men in a washroom, the token African American.

Into this ménage comes Michael’s former college roommate, Alan, who was apparently unaware of Michael’s sexuality and whom Michael seems bent on tormenting. As the evening winds on, Michael becomes increasingly determined to expose all his guests to humiliation, demanding that they play a telephone game where they are required to call the one person they have ever truly loved.

The Albee-like game is called ‘affairs of the heart’, and the play is replete with Hollywood-sounding allusions. The world depicted in Boys is the world of urban homosexual America in the years when to be publicly out was to face disgrace and possible imprisonment, and when divas such as Bette Davis or Barbara Stanwyck were part of the campy language of homosexual life. The Stonewall riots, a year later, are often claimed to have been inspired by Judy Garland’s funeral.

Crowley, who died this year, was steeped in Hollywood lore. He grew up in Mississippi and at seventeen moved to Los Angeles, where he worked for Natalie Wood and for a time lived with her and actor Robert Wagner. Crowley’s 2002 sequel, The Men from the Boys, which reunites most of the Boys characters, appears to have been a flop.

Netflix’s algorithms failed to recommend the film to me, perhaps because I had been very critical of the play in Homosexual: Oppression and liberation (1972), seeing it as unnecessarily stereotypical and self-loathing. After all, the most quoted line is ‘Show me a happy homosexual and I’ll show you a dead corpse.’ At the end, all but one of his guests having fled, Michael reflects: ‘If only we could just not hate ourselves so much.’ (The film ends on a slightly softer note than the original play.)

What my criticisms failed to recognise was the ability of audiences to empathise with and even celebrate a room full of damaged men, who in different ways – Harold, the pock-marked Jew; Bernard, the only black man in the group – understand the pressures that have made them so brittle.

Boys is in many respects a period piece, symbolised by the clunky landline phone and the answering service staffed by a real person. This version is remarkably close to the original stage and screen production: the few flashbacks, which take us briefly outside Michael’s apartment, don’t change the sense that we are watching a stage performance.

The Netflix production was the work of Ryan Murphy (Glee; Hollywood) and director Joe Mantello; like all the cast, they are gay men. Boys might be seen as an ethnic movie, rather like that other Netflix miniseries Unorthodox (2020) in that it grows out of immersion in a particular culture and reveals its secrets and hurts to a wider world. One of the most heartening aspects of the film is that it is reaching a wider audience than Crowley could have imagined. Writing this piece, I came across a laudatory review in The Hindu, one of India’s major newspapers.

The play was important in its time for depicting homosexuals on stage, even if they were portrayed as miserable and vicious. Watching it more than forty years later, one wonders whether the enormous talents involved in the remake are wasted. The sheer nastiness of the characters, especially Michael, played forcefully by Jim Parsons, grabs one’s attention, and the one-liners remain sharp. But I am unpersuaded by the hype that the film remains more than a piece of historical nostalgia.