When attempting to cajole a compulsive hoarder into cleaning up, it’s advisable to start with the things worth keeping, but it shouldn’t distract us from taking out the trash. Ubiquitous television and print personality Benjamin Law’s first foray into playwriting, Torch the Place, is one of four new works appearing in NEXT STAGE Originals, Melbourne Theatre Company’s new commissioning endeavour, the only one that doesn’t come from an established playwright. While there are several things to like in this début, there are a number that should be consigned to the skip.

At the outset, it is worth stating that the presence of an entirely Asian cast performing a play that deals exclusively with an internal family problem (one that isn’t predicated on, or even much interested in, the racial tensions that come from living in a largely monocultural white Australia) is in itself worth celebrating. While we have a long way to go towards genuine cultural diversity in Australian theatre, the fact that a play like Torch the Place exists on our main stages is cause for optimism.

The central conceit is also full of potential. Mum (Diana Lin) is about to turn sixty, and for her birthday, her children – eldest daughter Teresa (Fiona Choi), middle child Natalie (Michelle Lim Davidson), and baby of the family Toby (Charles Wu), along with Teresa’s ocker Vietnamese–Australian husband Paul (Max Brown) – have decided to give her an intervention rather than a present. They are going to help her declutter the family home, an emotionally fraught task, given that Mum is a serial hoarder, seemingly incapable of letting anything go. 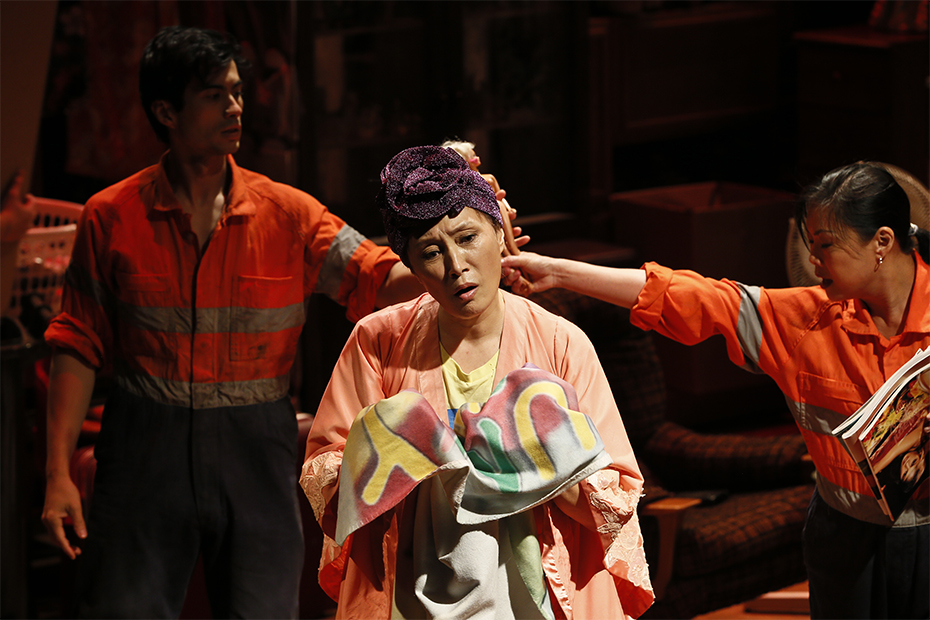 Indeed, the mere mention of throwing things away triggers fierce reprisals, severe avoidance techniques, and, ultimately, panic attacks. Law is at great pains to underline the fact that hoarders are often reacting to deep trauma. His play eventually lets us see the fissures in Mum’s life that have led to this dangerous compulsion. A terrible marriage and the death of a child are depicted in flashback, and the playwright treads a fine line in empathic response; we feel simultaneously for the matriarch of disorder along with the children forced to live under such pathology. There are authentic emotional truths underpinning this play, and some of them feel very close to the bone.

However, for all that is worth keeping, there are numerous things about Torch the Place that need binning, parts of the play that, like the broken piano at the centre of the set, are either out of tune or fail to sound at all. The first twenty minutes or so, with lines so manufactured that they seem to beg for a laugh track, and characterisations so thin they feel contrived from dot points – one sister is ‘the Instagram girl’, and the other ‘the dutiful daughter’ – are particularly grating. The ostensible mode is psychological realism, but Law segues into garish dreamscape and eventually into a kind of saccharine catharsis that feels cheap and unearned.

On the surface, this may seem like tonal shifting, but this is the world of sitcom; sentimentality and surrealism are employed as devices for the next gag. Law’s reliance on them, his reaching for different modes, simply reiterates his limited dramatic range. The play’s psychological framework – from past abuse to generational trauma – seems lifted from a couple of self-help books, and the plot’s resolutions never feel more than pragmatic. Neil Simon was the genius of play-as-sitcom, never afraid of the set-up and the punchline, but he had something Law doesn’t: a master’s skill with the architecture of the play, the sense that we are building something profound, or at least universal, from a modest conceit. 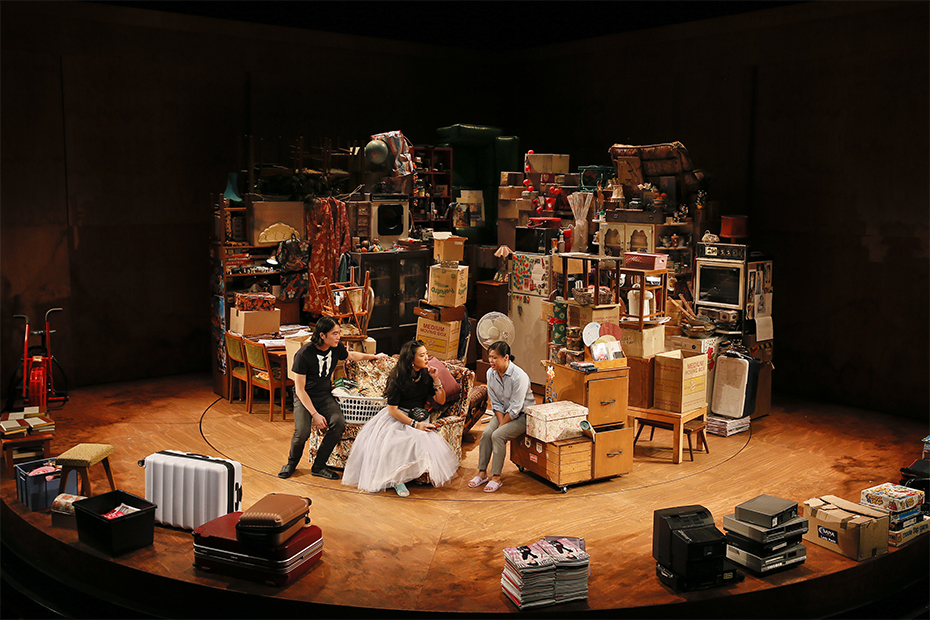 MTC Associate Director Dean Bryant is increasingly at sea with works that are flawed or in need of some kind of rescue, and his work here is far from his best. He allows the set (Isabel Hudson, with a design that has considerable impact but is often unwieldy) to dictate the blocking, which results in a lot of awkward interactions, and some disastrous dead patches in the pacing. He is only intermittently successful with the broadness of the characterisations. Lin is, for the majority of the part, deep in the pocket of caricature; every so often we get a hint of the humanity behind the mask, but it isn’t enough. Choi makes for an eternally exasperated elder daughter, Davidson is funny in the underwritten part of the prodigal daughter, and Wu is generally excellent as the half-arsed, political-activist son. Brown builds a touching portrait out of a two-dimensional part, and often feels like the beating heart of the play.

Sadly, it just isn’t much of a play. The majority of the insights are commonplace or obvious, and the specificity of the cultural references are strangely under-utilised. Law clearly grew up in a wash of 1980s–90s popular Australian culture; the piece is chock full of references to Punky Brewster and Humphrey B. Bear. But there is so little engagement with the delicious and difficult merging of cultures – nothing is made of the fact that Teresa has to translate her mother’s Cantonese to the younger siblings. We begin to wonder why we needed this family to tell this story.

Benjamin Law is a well-known celebrity who’s never written a play before, but he was given this commission over his far more talented sister Michelle Law, an established playwright of true potential. The delicate conversation between the siblings after that decision? That’s a story I’d like to see on the Melbourne stage.

Torch the Place, written by Benjamin Law and directed by Dean Bryant, is being performed at Arts Centre, Fairfax Studio, until 21 March 2020. Performance attended: February 14.