Feedback Loops, curated by Miriam Kelly, brings together artists from Australia and abroad to look at how those born in the 1980s negotiate identity and new media. Neither Gen X nor Millennial, this generation is known as ‘Xennials’ or ‘The Oregon Trail Generation’, in reference to The Oregon Trail (1985), a computer video game that was popular at the time.

This generation is characterised by having an analogue childhood that accelerated into a digital adulthood, coming of age with important technological shifts, such as the one from snail mail to email. Feedback Loops suggests that these artists are therefore better able to comment on the contemporary role of technology: they remember a time before the internet yet are fully literate in its hyper-connectivity. Since gaming is an important element of this cohort’s life experience, it is unsurprising to find several works from overseas that resemble the mechanisms, aesthetics, and mythologies of video games. This stood out in a local context, where games rarely feature in contemporary art, despite their cultural influence. 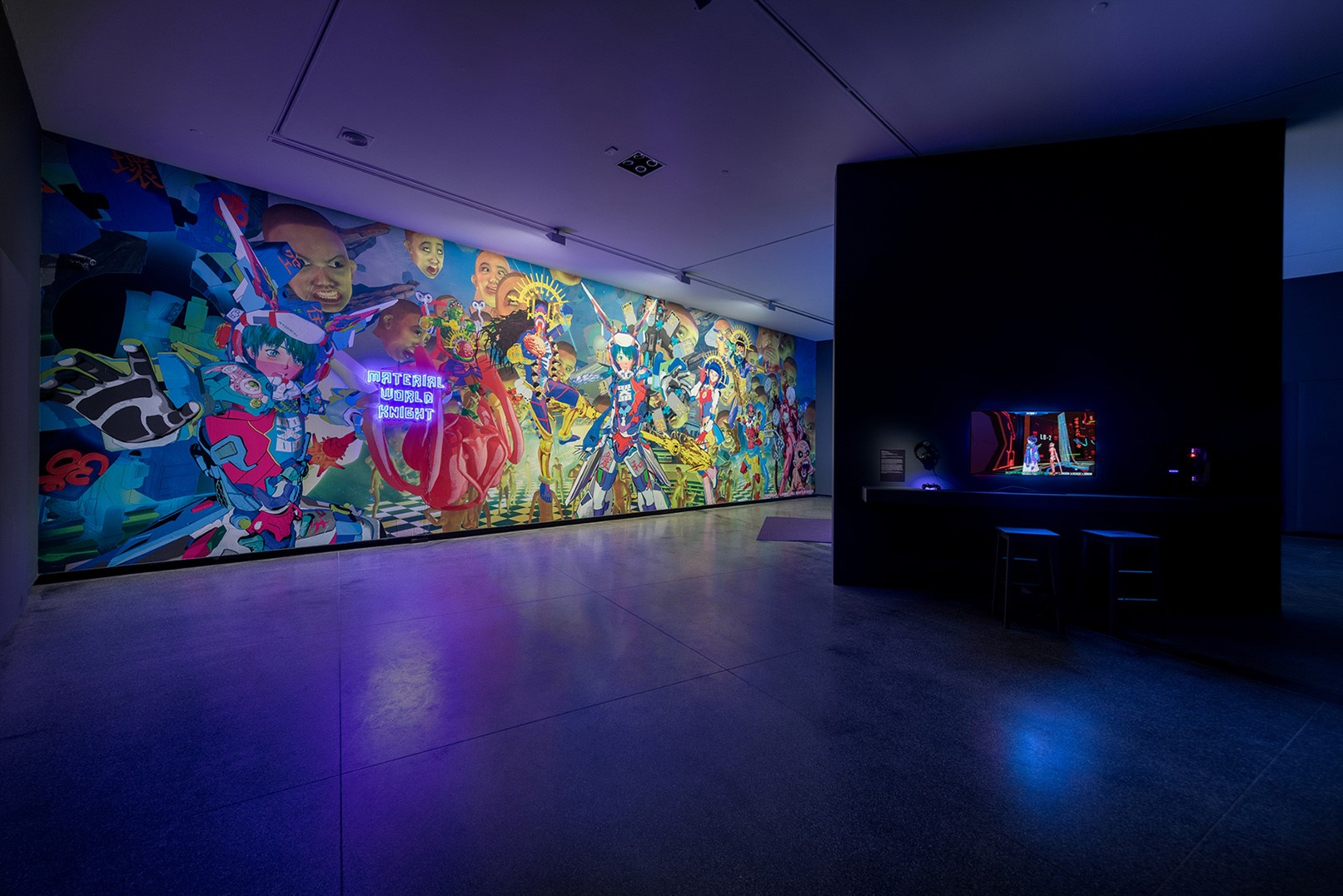 Lu Yang presents a hyperbolic action game called Great Adventure of Material World (2019) across two playing stations set up with a screen, a remote control, and comfortable seating. A large mural sprawls across the wall like arcade décor and aggressively introduces the characters of the game before one can lift the remote. The bombastic soundtrack blasting from the speakers also helps create this anime hub environment.

The game itself features a stereotypical masculine-presenting protagonist wearing sci-fi style armour (as seen in anime series like Evangelion and Robotech) who is only playable by way of running, jumping, punching, and flying. The character’s sole purpose is to follow a green arrow, which allows one to navigate outlandish landscapes featuring disembodied organs, teddy bears, and religious imagery. Trans-humanist messages pop up to continually interrupt the gameplay by simulating an introspective conversation with a feminine-presenting figure. These texts strike a philosophical note and often discuss corporeal limitations, which accounts for Lu Yang’s tendency to depict abject bodies. However, this is ironic, for the main characters conform to tropes of desirability in anime, such as being overly cute or sexualised. Despite its commercial appearance, Great Adventure of Material World manages to differentiate itself from industrial franchises by purposely lacking entertainment value. Indeed, the aim is to incite critical thought rather than excitement and the game thus quickly becomes tedious.

Tianzhuo Chen’s hallucinogenic installation includes two large projections, a photographic slide projection, and vinyl lettering. The main projections, Exo-performance / Baby Chinayu (2019) and Exo-performance/Beio (2019), sit side by side, each showing a performer dressed in ‘edgy’ clothing as if attending a Buddhist themed rave. One inhabits a hellish world of swirling fire while the other is standing against a backdrop of apocalyptic ice. Motion-tracking alters their appearance by superimposing 3D supernatural armour on their bodies, changing their faces from human to demonic. The suit of armour is also visible on a split screen, where it mirrors the model’s movement, like an autonomous skeleton. 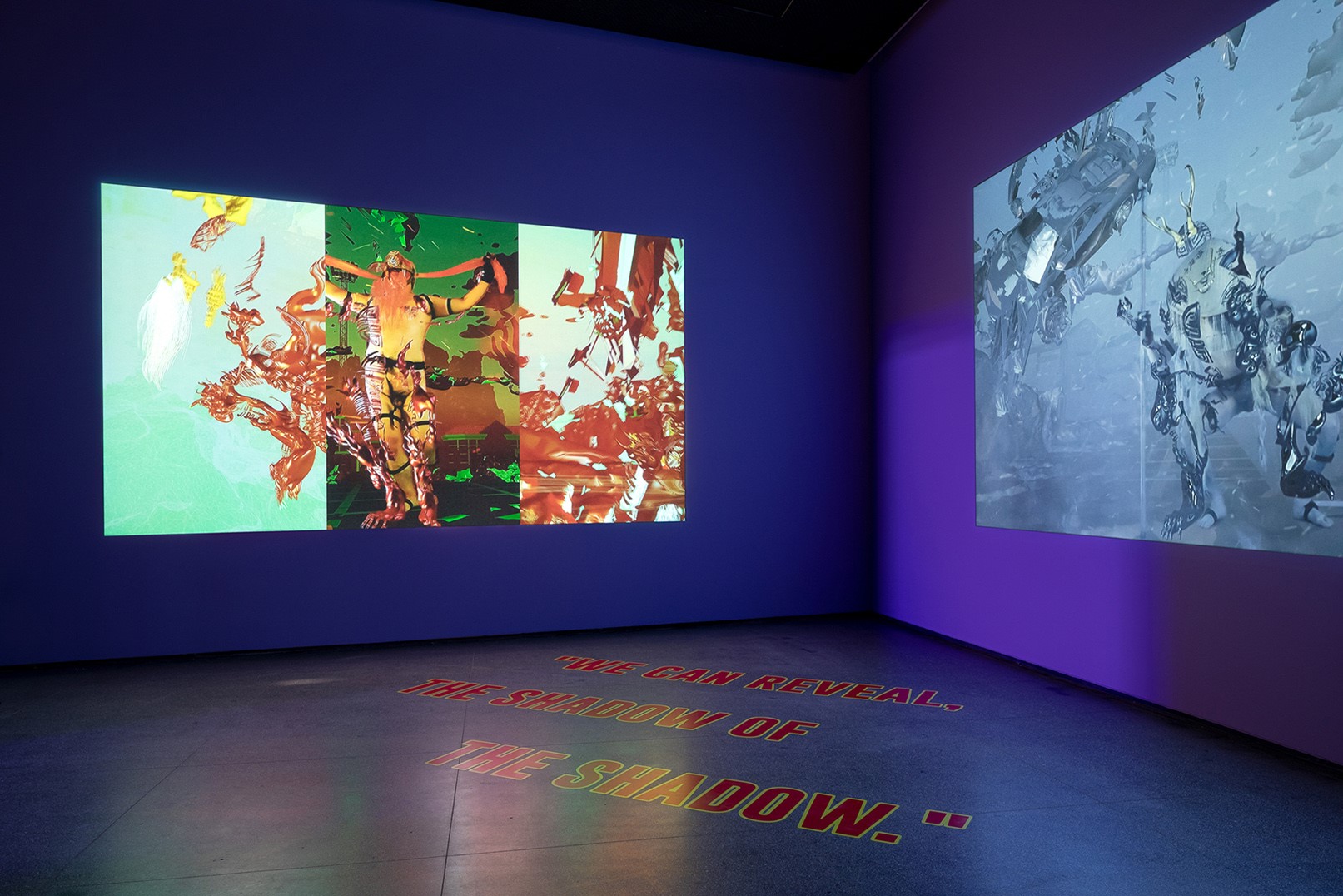 Chen’s work evokes sprites in a video game, where figures display minimal movement while waiting to become playable avatars. On the gallery floor there is a cryptic vinyl that reads ‘WE CAN REVEAL, THE SHADOW OF THE SHADOW’ – a footnote of sorts. Even though it is difficult to decipher the meaning behind this message, it contributes to the mythological atmosphere of the installation. The slide projection appears to be playing photographic documentation from an earlier performance, with staged scenes suggestive of sadomasochism.

The work by Sahej Rahal, one of the most mystifying contributions to the show, features videos and sculptures based on a sentient AI program. Rahal installed a large projection and a stack of CRT monitors amid a series of sculptures. The latter have an insectile appearance (fat bodies and long, thin legs), similar to the fantastical entities that inhabit the videos in Antraal (2019), another work by Rahal. These digital mutants traverse forests and interact with simulations of nature across the projection and monitors. The aesthetics and playfulness of the work evokes early 3D consoles such as Nintendo 64 and PlayStation 1, where the graphics have a distinct polygonal style. This link makes Antraal seem like a playable organism controlled by an invisible consciousness, a video game with a wireless remote. The eeriness emerges when one reads that that these videos are in fact an AI program: the artist claims they are sentient beings. This is a twenty-first-century equivalent of a hamster in a cage (or a hyper-Tamagotchi for the intelligentsia). 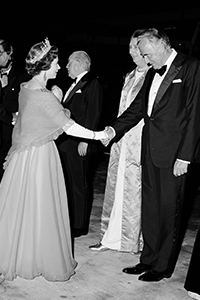 Even though the focus of the show is on grander themes – such as spirituality and philosophy – the emphasis on the artists’ ages in the curatorial statement brings attention to the potential influence of gaming. While other artists in the show—such as Madison Bycroft, Justin Shoulder, and Zadie Xa—do not reference video games, this review concentrates on those who resemble this pop-cultural form to explore how gaming influenced this generation. For these practitioners, the video game is what cinema was for an earlier wave of Gen X artists (Doug Aitken, Ximena Cuevas, Steve McQueen), who used the language of film to articulate critical concerns.

Unfortunately, the exhibition suffers from a sense of repetition. Like a feedback loop, the artists in the show deal with similar themes (mysticism, spirituality, and technology) and media (video and costuming) in a closed circuit of content and form. Moving through ACCA, one meets a repetitive mediation of personal mythologies through popular culture. This infinite echoing invokes a camera pointing at a screen, where the same image multiplies ad infinitum. Given the exhibition’s title, this could be an intentional strategy seeking to find an ulterior meaning in recurrence. Just as video feedback reveals a fracture in optical systems with a jarring image, Feedback Loops may seek to find a rupture in today’s relationship to technology.

Feedback Loops is showing at Australian Centre for Contemporary Art until 22 March 2020. 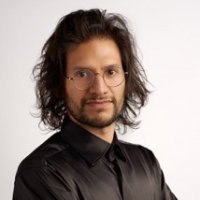 Diego Ramirez is an artist, writer and arts worker. He is interested in the relationship between types, stereotypes and monsters in a racialized discourse. His writing features in A+a: Art and Australia, NECSUS, un Projects, Runway Journal, Critical Contemporary Culture Journal, The Article, Fragmented Magazine, *dumb brun(ette), and catalogue essays for various exhibitions. He is co-founder and co-editor of the discursive platform *dumb brun(ette), which published the booklet *dumb brun(ette) vol.1 for Bus Projects’ stall at the NGV Melbourne Art Book Fair. Ramirez is represented by MARS Gallery in Melbourne.

Diego Ramirez is an artist, writer and arts worker. He is interested in the relationship between types, stereotypes and monsters in a racialized discourse. His writing features in A+a: Art and Australia, NECSUS, un Projects, Runway Journal, Critical Contemporary Culture Journal, The Article, Fragmented Magazine, *dumb brun(ette), and catalogue essays for various exhibitions. He is co-founder and co-editor of the discursive platform *dumb brun(ette), which published the booklet *dumb brun(ette) vol.1 for Bus Projects’ stall at the NGV Melbourne Art Book Fair. Ramirez is represented by MARS Gallery in Melbourne.