There is much conjecture around the concept of Shakespeare’s ‘problem plays’; critics disagree not only on the strict meaning of the term – F.S. Boas saw them as works that used a protagonist’s dramatic situation to illustrate a social problem, while Ernest Schanzer insists they turn on an ethical dilemma – but also on the actual list of plays that fit the description. Traditionally, the problem plays are All’s Well That Ends Well, Measure for Measure, and Troilus and Cressida, although The Merchant of Venice is sometimes included. What clearly links those works is an ambivalence of tone, a resistance to the parameters of genre. Of course, if that were the only qualification, we would have to include The Winter’s Tale and even Antony and Cleopatra.

A play that is almost never mentioned in this discussion, but one that should be, is Much Ado About Nothing (1598). Audiences tend to see this work as one of the Bard’s sunniest, something Kenneth Branagh’s 1993 film version, with its terracotta-lit Tuscan setting, makes explicit. But it has a canker in the bud that has become increasingly difficult to ignore. When the young lover at the centre of the tale is tricked into believing his fiancée is cheating on him, he viciously and publicly shames her at the church, and then remains utterly unmoved by her reported death. The effect is more sunburnt than sunny, and the sting of sexual prejudice and male entitlement remains on the skin no matter how much honey is poured into the play’s conclusion. Contemporary performances of this work turn on the director’s handling of this incident. Ignoring it simply won’t do, but giving it free rein brings its own problems. 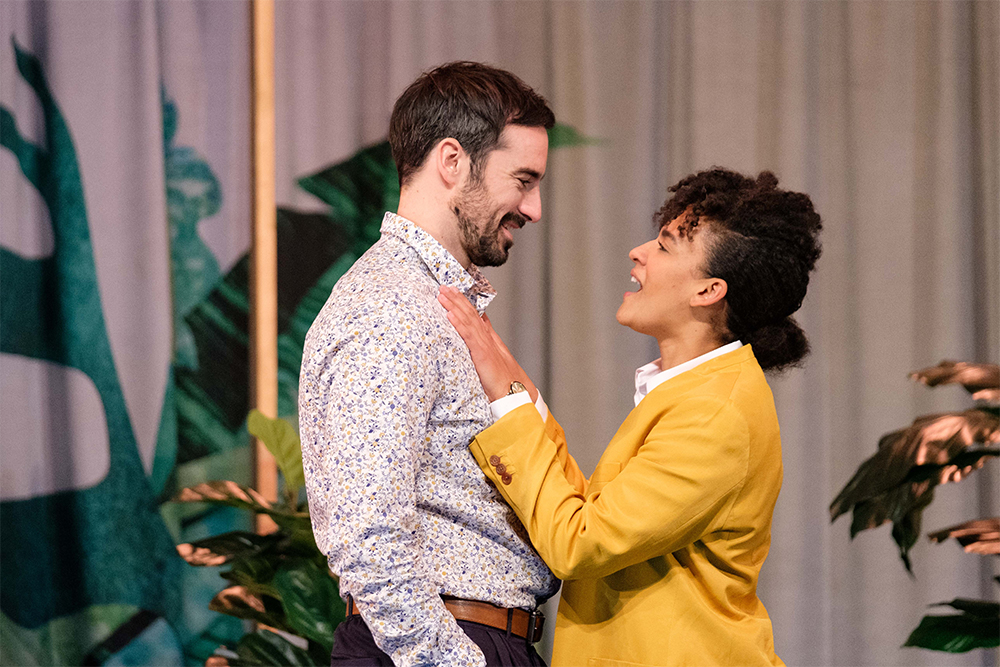 Director James Evans certainly doesn’t ignore it; if anything, his production for Bell Shakespeare tilts so thoroughly towards the misogyny and subsumed male violence that he chokes all the joy out of the rest of the play. Audiences will always associate this work with the characters of Beatrice (Zindzi Okenyo) and Benedick (Duncan Ragg), true lovers who like to pretend to themselves and the world that they hate each other. Technically, their protracted courtship and immense war of wits is the play’s subplot; it’s the aborted and hastily remounted marriage of Claudio (Will McDonald) and Hero (Vivienne Awosoga) that takes up the two hours’ traffic of this stage.

Evans decides to open his production with the conclusion, as a chastened Claudio accepts an unknown replacement bride who turns out to be Hero – the play is full of masks and reveals, of mistaken intentions and eavesdropped conversations – but it is difficult to see what he hoped to achieve with this. It means that the opening note is a lugubrious and leaden one, from which the production never fully recovers. There is little opportunity to warm to the returning soldiers at all, given that Danny Ball plays the courtly Don Pedro as a smarmy, pouting egotist and McDonald makes Claudio seem little more than a pampered pretty boy. Only Ragg’s Benedick has any charm, and thankfully he has it in spades. Toning down the character’s tendency to braggadocio, he uses his reluctance as a buffer against his friends’ self-satisfied locker-room banter. When the men turn on Hero, this Benedick grows instantly in moral stature, a man apart. It’s a lovely portrait of doubt that morphs into wisdom and integrity. 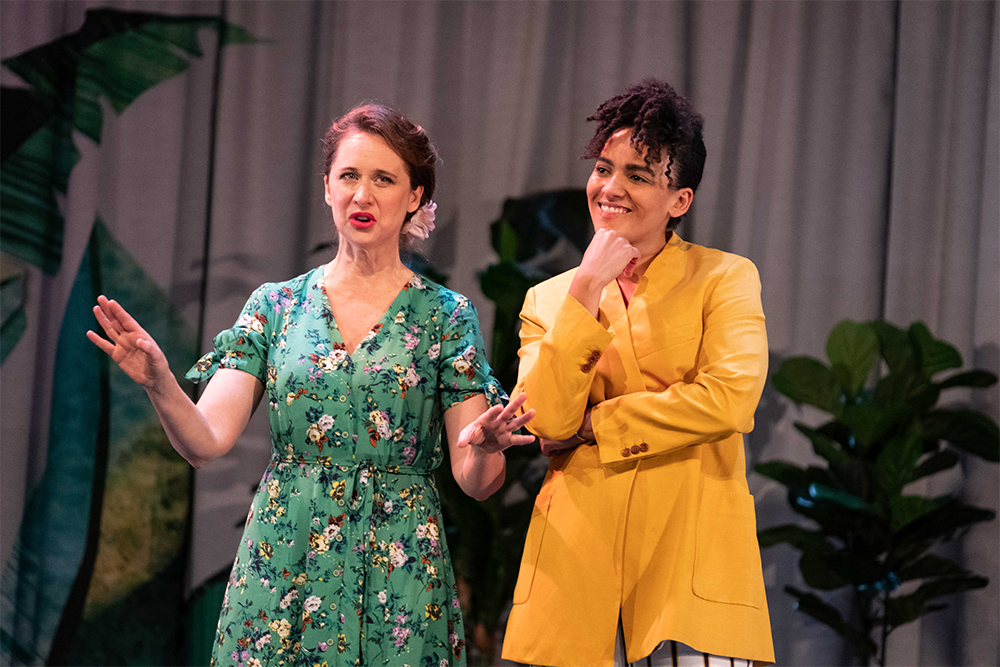 If Evans thought to elevate or champion the women by undermining the men, the experiment largely fails. Okenyo has plenty of spunk and weariness, but little of the verve and luminosity of which Beatrice is capable. We get a strong sense of her disgust with the men who treat Hero so abominably, but almost none of the joy and energy she draws from her war of words with Benedick. Awosoga invests Hero with spunk of her own, and she delivers a fantastic slap across Claudio’s face near the end, but it’s a thankless and colourless role for the majority of the running time. Best is Mandy Bishop as the usually tedious Dogberry, her malapropisms employed as a base note for some very silly but welcome clowning.

Pip Runciman’s set and costumes – with their faintly subtropical colours and garish dark-green plant motifs – suggest long hot nights in Miami rather than the sun-kissed streets of Messina, which would be fine if anything were made of it. The playing space is both ugly and impractical, which Bell Shakespeare seems to think is a necessary evil in their touring productions (Evans’s previous production for this company was the disastrous Julius Caesar, which was even uglier than this). Perhaps the touring productions shouldn’t play in the major cities, or should at least play in smaller and quirkier venues; there is something shoddy about the aesthetic here that seriously damages the company’s brand. 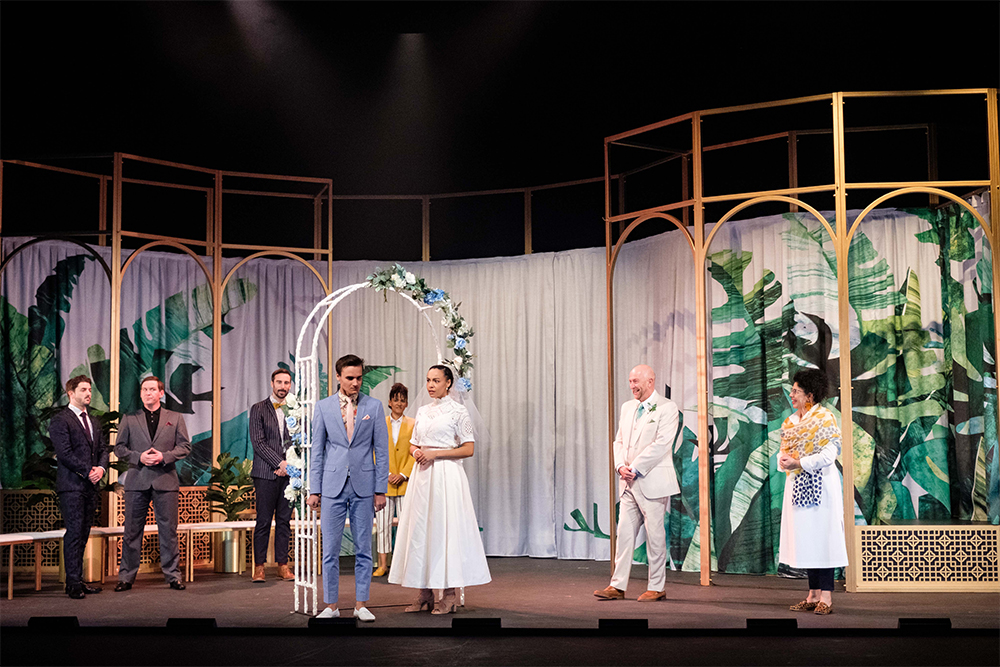 The cast of Much Ado About Nothing (photograph by Clare Hawley)

Sadly, this Much Ado About Nothing is stingy not just aesthetically but emotionally. It tries to sound a note of hope at the end, but its overarching vision is one of hatred and suspicion between the genders, the kind that a couple of weddings are unable to disguise. This is a problem all right, the same problem directors had with The Taming of the Shrew back in the 1990s, when contemporary mores resulted in productions that were unremittingly depressing and mean-spirited. Nobody wanted to see them, and that play’s popularity has waned for now. Perhaps Much Ado will be retired too, in due course, to rise again from the ashes of our current gender wars. Let’s hope it has a happier resurrection than this.

Much Ado About Nothing, in its première season, is being performed at the Fairfax Studio, Arts Centre Melbourne, from 17 to 27 July 2019. The production will then tour nationally. Performance attended: July 18