The map of In Cahoots is a tracery of journeys made by road and air, like songlines traversing the continent, speaking to points of departure, conjunction, and communion, and to the central theme of the project: communication.

Involving six Aboriginal art centres partnered with five individual artists and one collaborative duo, each artist and community presents a singular set of issues, not merely dealing with the logistics of distance and accessibility, but also bridging vast cultural differences.

The main wall of the Tony Albert (Queensland/New South Wales) and Warakurna Artists (Western Australia) installation is hung with a colourful array of figures, from hovering helicopters to camels, trucks, donkeys, children and footballers, houses, babies, musical instruments, a bride and groom; the full panoply of community life fashioned from painted, rusty tin, a joyful testament to Albert’s engagement and inclusiveness. Individually, these pieces seem naïve; together they make a coherent whole. On the remaining walls hang vibrant photographs from the Warakurna Superheroes series: children dressed as their favourite superhero, in costumes handmade from recycled materials, pose flamboyantly atop the rusting hulks of abandoned cars and farm equipment.

Louise Haselton (South Australia) described working with Papulankutja Artists (Western Australia) of the Blackstone Community as challenging. She had to cope with isolation and negotiate the tricky terrain between initiating artwork and taking over. Eventually, she was forced to let go of preconceptions, a recurrent theme of the collaborative process, and accept a different world view and ways of communicating.

Haselton posited incorporating Papulankutja desert grass weaving with bronze, equating the antiquity of the casting process with traditional tjanpi practices. When she returned from a residency in Berlin with bronze holders for the woven tjanpi, she was taken aback by the reaction of the women, who found the dull brown metal too sombre. They reclaimed ownership by irreverently painting the bronzes with bright concentric circles that mimicked their cradled weavings. The results bear comparison to spectacular lollipops. 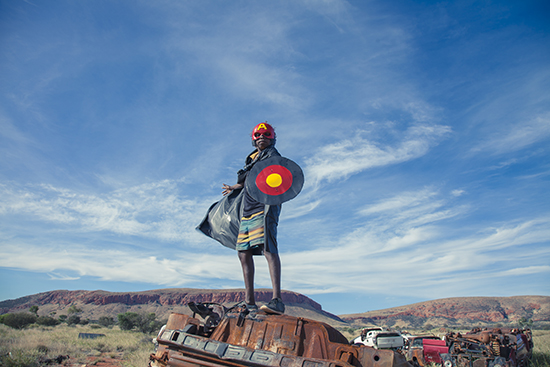 In the silences that accompanied concentrated periods of weaving or painting, Haselton began to see a complex range of signals pass between the women. They had no need to speak aloud. She learned to sit and let their silences and their stories wash over her like a meditation, finding that time slowed. With that, her desire to control the outcome of their collaboration evaporated.

Initially, the spot-lit pieces ranged around the walls of the Neil Aldum (Western Australia) and Baluk Arts (Victoria) installation seem self-conscious. Baluk is the only urban Aboriginal art centre represented in this exhibition, and the least homogenous. Members of the Mornington Peninsula community come from diverse backgrounds and locations. What unites them is a shared narrative of displacement, and what I had mistaken as a lack of authenticity, a pretence to traditional aboriginal crafts, was more a reflection of my limited understanding.

To pick one example from this group: Dominic Bramall-White trained as an artist before discovering his Tasmanian aboriginal ancestry. For him, Baluk became a safe place to explore the ramifications of his adoption, his loss of family, and his Aboriginality. His methodology is to forge the tools he uses to fashion tradition materials in contemporary contexts. His North East Vessel skims the waves with bull kelp sails and a black wattle hull, a beautiful, dark object balanced between sea and sky, black and white; reminiscent of ocean going tragedies like the Flying Dutchman or slavers’ ships. 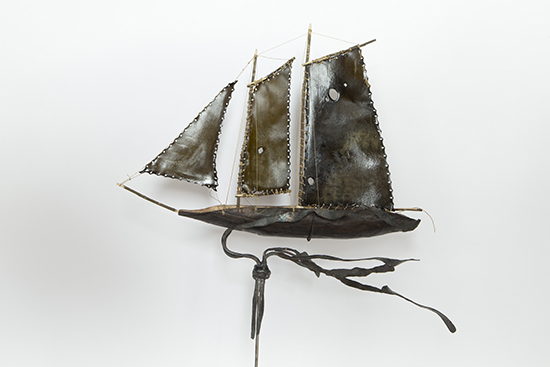 Similarly, the furniture salvaged from mangled car wrecks by Trent Jansen (New South Wales) and Mangkaja Arts Resource Agency (Western Australia), seems ill-served by overly dramatic lighting. Jansen, the only designer amongst the visiting artists, might be accused of imposing formalism and perfectionism on his collaborators. His practice may not encourage inclusiveness on a Tony Albert scale, but his projects are consciously co-authored and involve a genuine exchange of artisanal skills. In fact, Jansen attributes the perfectionism of the finish applied to the sharp metal edges of Collision, and an unerring eye for form, to his collaborator Johnny Nargoodah. He also credits Nargoodah with the tanned hide draped over a rusty metal seat, transforming a harsh, ridged machine into an irresistible, sensual flank.

Jansen has an interest in creature mythologies and cultural cross-overs. The Jangarra Armchair, another deliciously tactile piece, is based on collaborator Rita Minga’s drawings and stories of a big, hairy man-killer who hides behind large rocks and anthills, and is the Fitzroy Crossing equivalent of a bogeyman. The bulging, organic armchair, constructed from carved and inverted coolamons (water-carriers), fixed to a wooden armature, and studded with traditional human hair string, looks as if it might arise at any moment.

At Parnngurr, Claire Healy and Sean Cordeiro (New South Wales) worked with Martumili Artists (Western Australia). The couple’s usual concept-based practice had to defer to the demands of process, another case of ‘letting go’ which brought freedom from preconceived outcomes. Like several other groups, they chose to incorporate parts from the wrecks littering the landscape with Minarri desert grass weaving. The combination of organic forms and the uncompromising geometry of car doors is texturally stunning, especially Nancy Karnu Taylor’s Jurtupa and Wawal, a pair of doors with a giant breast protruding from one window, and an ambiguous crater woven into the frame of the other.

Unattributed paintings, artefacts from the Parnngurr art shed, and photographs of abandoned wrecks painted in Gothic script with words that name animals as well as cars find random placement on the walls. The carcasses of Swifts, Impalas, Colts, and Stags baking in the Pilbara heat remind the viewer of the brute force of these contemporary beasts. 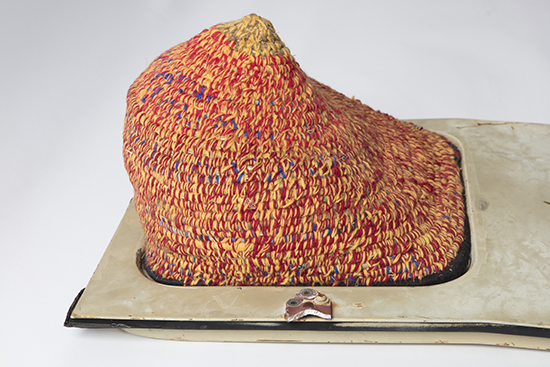 Every collaboration has its highlights and catastrophes. Healy is open about the difficulty she and Cordeiro had reconciling their conceptual art practice with Martu art making, and about her doubts as to whether a true collaboration was achieved. Perhaps that is why the pairing of Curtis Taylor (Western Australia) and Ishmael Marika from the Buku-Larrnggay Mulka Arts Centre (Northern Territory) struck me as the most integrated collaboration and the most aesthetically successful.

The two Aboriginal filmmakers are of similar age and grew up in remote communities, the Western Desert and Northeast Arnhem Land, respectively. Both studied at universities in urban centres, were interested in representations of ‘Aboriginal horror’ in film, and wanted to work together. For this project, they visited Marika’s family, where Taylor was informally initiated into Yolngu traditions. Then Taylor returned the favour, inviting Marika to Punmu, his grandmother’s Country. They continued to film around both communities but were also excited by the prospect of working with physical materials and incorporating traditional skills from both cultures.

Now, hanging from the ceiling of the gallery, are one hundred spears made from desert acacia and mangrove wood, symbolising Martu and Yolngu collaboration. The coloured ochres under the spears provide a focal point for this cultural exchange, and the gigantic spool of hair string in one corner likewise represents the connection between the two cultures. In the opposite corner, a bank of television screens shows short videos from both locations, archival footage, and Taylor’s powerful Ngarnda (Pain) (2015), which explores blood as ritual, as symbolic of family and cultural knowledge, and as a visceral enactment of dispossession. 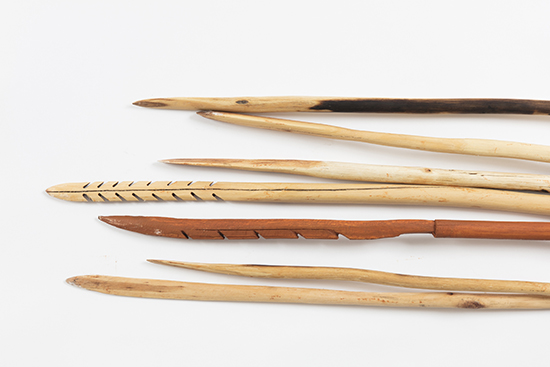 I am hard-pressed to sum up In Cahoots. The results are as diverse as the individuals involved, and represent a major coup for Fremantle Arts Centre. Curator Erin Coates deserves our accolades for managing to bring off this mammoth undertaking in a little under two years. For those not fortunate enough to participate in the artists’ talks during the opening weekend, a sense of the complex stories underpinning the exhibition can be gleaned from the accompanying catalogue (FAC, 2017).

If I may borrow a final word from Tony Albert’s eloquent appraisal of difference: ‘The humanity [is] familiar.’

In Cahoots: artists collaborate across Country continues at the Fremantle Arts Centre, until 28 Jan 2018.