Few bad films have received such prolonged adoration and exposure as The Room. The story of Johnny (Tommy Wiseau), an ‘All-American guy’, and his fiancée, the ‘devious’ Lisa (Juliette Danielle), who cheats on him with his handsome best friend Mark (Greg Sestero), has been screening in cinemas worldwide since its initial release in 2003. Audiences are enamoured by the film’s hilarious incompetence. It is peppered with creepy and inconsequential characters, horrendous dialogue (‘Leave your stupid comments in your pocket!’), and baffling directorial decisions. Audience rituals have become a part of the screenings. Room fans dress up as their favourite characters, yell dialogue, and throw objects at the screen during certain scenes, à la The Rocky Horror Picture Show (1975).

Greg Sestero released his memoir The Disaster Artist: My life inside The Room, the greatest bad movie ever made (2013) in response to mounting interest in the film’s conception and its enigmatic creator, Tommy Wiseau. Beneath the The Room’s many absurdities was a compelling account of Greg and Tommy’s turbulent friendship leading up to and during the film’s production, and beneath that, a treatise on Hollywood, the American Dream, trauma, grief, and delusion that framed a detailed portrait of Wiseau.

In order to compress the 280-odd pages of Sestero’s acclaimed memoir – or its equally engaging twelve-hour audiobook – into a 100-minute film, The Disaster Artist’s director James Franco and screenwriters Scott Neustadter and Michael H. Weber eschewed the subtle poignancy of Sestero’s account in favour of a brisk tribute to ‘the Citizen Kane of bad movies’, one that falls just short of expounding its source material.

The Disaster Artist traces Sestero’s early years as an aspiring actor in the late 1990s in San Francisco to The Room’s Hollywood première in 2003. Having been mesmerised by Wiseau’s histrionic rendition of Brando’s famous ‘Hey Stella!’ scene from A Streetcar Named Desire in an acting class, Greg, nineteen years old and self-conscious, strikes up an unlikely friendship with the oddity. Tommy appears to be middle-aged, with long, dyed black hair and a craggy face. He has a garbled accent, possibly French, possibly Eastern European – nobody knows for sure. He is evasive about his past and how he accumulated his seemingly vast wealth. He wants nothing more than to be an actor, despite his obvious lack of talent. As Greg and Tommy’s friendship deepens, Greg expresses his desire to move to Hollywood, and Tommy invites him to stay at his one-bedroom apartment there. As Greg’s star rises, Tommy plots to emulate Greg’s apparent success. A series of rejections from casting agents and Hollywood producers sting Tommy into producing his own work, a film called The Room, into which he pours $6 million of his own money. The Room’s production is hampered by Tommy’s failure to remember his own lines and by his frequent and explosive confrontations with the film’s frustrated actors and crew. The end result is a wonderful mess, and the rest is history. 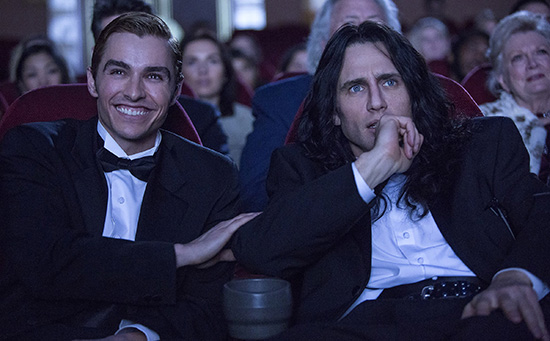 James Franco’s The Disaster Artist is engaging for the most part. The scenes are lively and fast-paced, the performances generally strong. Seth Rogen is perfectly cast as The Room’s good-natured and bemused script supervisor, Sandy Schklair, Zac Efron is surprisingly menacing as Dan Janjigian, The Room’s thug character ‘Chris R’, and James Franco is meticulous in his portrayal of Tommy Wiseau. Franco’s time spent studying audiotapes of Wiseau’s speech and staying in character during the film’s production allowed him to accomplish the near-impossible task of playing Wiseau without descending into pure caricature. Oddly, the weakest portrayal in the film was of its protagonist Greg Sestero, as played by a miscast Dave Franco, younger brother of James. Besides sporting a distracting fake beard at one point – it looks as though someone shaved a teddy bear and patchily glued the fuzz to his chin – Dave Franco is much shorter than his brother. This would not be an issue in most films, but in his memoir Sestero attributes Wiseau’s resentment to the feelings of inadequacy he felt towards the six-foot-plus, sandy-haired, blue-eyed, ‘all-American’ Sestero; the embodiment of everything Tommy wished himself to be. Dave Franco’s inclusion reeks of nepotism.

While it isn’t necessary for filmmakers to slavishly adhere to the source material when adapting a book to film, it is important to keep the character’s motivations consistent. The Room is a cocktail of Wiseau’s accumulated angst – childhood traumas, failed relationships, unfulfilled ambitions – coaxed out by his tumultuous friendship with Greg (which is laced with homoerotic jealousy) and a misinterpreted viewing of The Talented Mr Ripley (1999). In the film, The Room springs from a few casting rejections and a sudden brainwave. Greg: ‘Wish we could make our own movie.’ Tommy: ‘That’s a great idea.’

Franco’s Wiseau is unconcerned when Claudette, an elderly cast member of The Room (played by the underused Jacki Weaver) faints during production. In the memoir, Sestero describes how distressed Tommy is, and how he snaps out of his egoistic miasma to help her. This episode emphasises Wiseau’s humanity, which lies just beneath his comically petulant façade. It is the same streak of dormant kindness that compels Wiseau to support Greg early in his career and to provide him with the encouragement he lacked from his family. Moments like these, which have been hacked away from the film for expediency, are what redeem Wiseau’s ‘complicated darkness’, as Sestero describes it.

Despite an avalanche of unctuously positive reviews so far – it currently holds a ninety-five per cent rating on Rotten Tomatoes – The Disaster Artist is a vexing film. Who is it intended for? Fans of The Room and Sestero’s memoir will find nothing new, other than validation from a number of celebrity talking heads at the prologue of the film, that say, yes, The Room is a joyfully incoherent mess, and, yes, the story of Tommy Wiseau is a fascinating one. At the film’s conclusion, the cast lovingly and precisely re-create the more memorable scenes from The Room. It is exhilarating to see those infamous scenes, but we are left with a feeling that the entire project was a pretext for Franco and his friends to play dress-ups. Ultimately, The Disaster Artist perpetuates the misconception of film adaptations as the apotheosis of storytelling. The surging popularity of serialised podcasts and prestige television is rapidly dispelling that notion. And the superior memoir still exists, as does The Room. 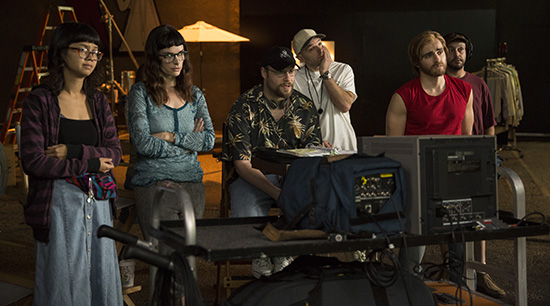 The cast of The Disaster Artist (Roadshow Films)

In Sestero’s memoir, Tommy Wiseau baffles you at first. Then you start to dislike him – and pity him. At the end, you can’t help loving him. We are never taken on the same emotional rollercoaster in Franco’s rendering. Instead, we are in a race car travelling from point A to point B with an excellent Tommy Wiseau impersonator in the passenger seat and a man with teddy-bear fluff glued to his chin in the back.