For my return visit to the exhibition Fred Williams in the You Yangs at the Geelong Gallery, I decided to take the train instead of driving, as I usually do. Although the creeping suburban sprawl, especially around Melbourne, has narrowed the area without housing or industrial estates, there is still just enough left of the flat Wimmera volcanic plain, its monotonous succession of fenced paddocks, and its prominent outcrop of granite hills – the You Yangs – to appreciate the task that Fred Williams undertook when he first visited the place in the winter of 1962 to draw and paint gouaches.

Once before, in early 1957, Williams had observed the hills rising abruptly from the pancake flatness surrounding them. He was standing on board the ship that was bringing him home after five years spent in London. The sight intrigued him, but it was to be another five and half years before he was to go there, driven by his friend James Mollison.

Upon returning home from England, he had set out to reimagine the Australian landscape, initially by reconceiving the form of the gumtree and of the eucalypt forest and glade. In the You Yangs he was faced, for the first time, with reimagining vast space and emptiness within the landscape seen from the summit, and of pictorially harmonising this far view with the myriad incidents of nature seen at closer range. The Geelong exhibition of Williams’s drawings and gouaches done on site in the You Yangs, and the etchings and paintings made in the studio, shows us how he achieved this and how he subsequently developed it in his art. The exhibition, which has been concisely and beautifully selected and documented by Jason Smith, Director of Geelong Gallery, is installed with impressive clarity in two adjoining gallery spaces, the works grouped roughly chronologically, with the prints shown together in the second area. The accompanying catalogue provides an eloquent text and illustrates all of the works.

Fred Williams’s way of making art was to work in series, initially through force of circumstance, as in the Music Hall works of his London years, and later, once he had reached artistic and painterly fluency, in a different sense – by experimenting with subject and motif, and by elaborating compositions, fugue-like, from different points of view, varying accentuations and formats, and using different media. Each series contained echoes of the previous group of works, as well as seeds of those that were to follow. The period during which Williams arrived at his imaginative fluency and discovered his vision of the landscape was brief; it occurred as he worked on the You Yangs series in the second half of 1962.

The exhibition opens with Williams’s earliest You Yangs watercolours and gouaches in a selection that includes those painted with the dark outlines that hark back to the landscapes he made at Mittagong in the late 1950s. Others are airy, atmospheric sketches brushed lightly and surely onto the sheet; watercolours and gouaches done in this way do not allow for corrections, and these have the brevity and suggestive power of oriental painting. 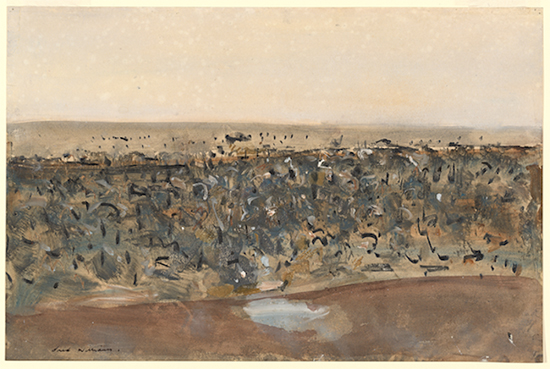 However, what they lack is the strong structural framework that Williams sought and that he had found earlier for his compositions of gumtrees. He discovered this structure in the pattern of fenced fields seen from above, with their agglomeration of vegetation at the fence lines, and their scattering of low shrubs and grasses. A gouache from the collection of the Art Gallery of New South Wales is the pivotal work here, a composition that includes a strong vertical, intercepted at the bottom by a horizontal line or series of strokes, a conjunction of elements that might stand for fence lines or irregularities in topography. Around this geometric framework are dotted lively, but instinctively organised, dabs of paint denoting the scattered vegetation of the fields. The discovery – or invention – of this structure, marked a key point in Williams’s art, allowing it to take off into painterly abstraction while always remaining tethered, kite-like, to its subject. An experimental virtual-reality video available for brave visitors subjects one of the paintings in the exhibition to digital manipulation so as to show this process coming to digital life. 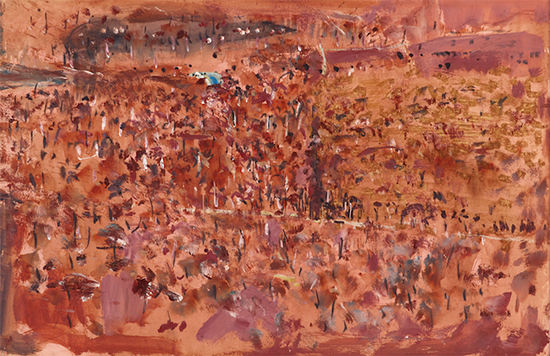 The highlight of the exhibition occurs in this room with the grand sequence of paintings that Williams made in the studio after the works done on site. These are manifestly deeply considered works painted with oil and tempera, layer upon layer, wet on wet paint, and wet over dry, with attention being paid to every brushstroke. Williams called the warm brownish colour of the prepared layer of paint on which the first series of You Yangs paintings were done ‘painter’s honey’ – a fitting description of the way the works glow in this display. The second room of the exhibition is reserved for the smaller, ‘chamber’ works, chiefly the prints that were made concurrently with the paintings. All nine of the You Yangs etchings are included in nineteen impressions that demonstrate, through their various states, the process of formal experimentation that was an intrinsic quality of Williams’s art overall. 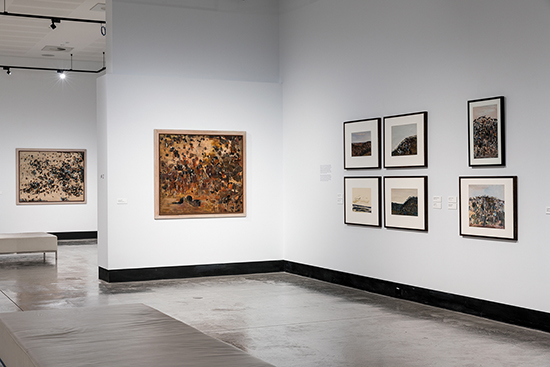 If you have time after your first viewing of this exhibition, go to the rooms where some of Geelong’s permanent collection is installed. Here you’ll see how earlier painters – notably Von Guérard – depicted the You Yangs. Then go back to Williams and marvel at the originality and ingenuity of his vision.

Fred Williams in the You Yangs continues at the Geelong Gallery until 5 November 2017.

Irena Zdanowicz was Senior Curator of Prints and Drawings at the National Gallery of Victoria from 1981 to 2001. In 2003 she collaborated with Stephen Coppel for the catalogue of the British Museum’s exhibition, Fred Williams: An Australian Vision. Her online publication: Rick Amor: An Online Catalogue Raisonné of the Prints has recently been launched: www.catalogue.rickamor.com.au. She is now working on a catalogue raisonné of the late work of Bea Maddock (1934–2016).

Irena Zdanowicz was Senior Curator of Prints and Drawings at the National Gallery of Victoria from 1981 to 2001. In 2003 she collaborated with Stephen Coppel for the catalogue of the British Museum’s exhibition, Fred Williams: An Australian Vision. Her online publication: Rick Amor: An Online Catalogue Raisonné of the Prints has recently been launched: www.catalogue.rickamor.com.au. She is now working on a catalogue raisonné of the late work of Bea Maddock (1934–2016).