Song to Song is writer and director Terrence Malick’s cinematic version of the modernist literary experiment: multiple internalised viewpoints, stream-of-consciousness narrative, chronological fragmentation, and a reality apprehended through symbolic or metaphoric conjunction. He is abetted in this project by Oscar-winning cinematographer Emmanuel Lubezki, whose muted palette of gauzy, twilit pastels is shattered by the abrupt streak of a neon-green, vermillion or ultramarine, nightclub colours that are the visual equivalent of a vivid memory surfacing from a sea of vague recollection.

Song to Song is also, according to an uninspired publicity blurb, a rock ’n’ roll romance tracing four lovers through the Austin (Texas) music scene. In a nutshell, aspiring musician Faye (Rooney Mara) is in love with another aspirant BV (Ryan Gosling), but is still involved with Svengali-ish record-company mogul Cook (Michael Fassbinder reprising his role as a sex-addict), who picks up, marries, then treats abominably, the damaged but sexy ex-school teacher turned waitress Rhonda (Natalie Portman). But don’t expect another Nashville (Robert Altman, 1975), let alone a Taking Woodstock (Ang Lee, 2009). To hang one’s expectations on the hope that Malick might adhere to a conventional story-arc, or that there might be footage of Austin’s famous music festivals, is to invite disappointment.

‘Nothing is real,’ says Faye.

Nothing is real because Malick has chosen to explore a world of vacuous wealth, where everything is for sale, including the sex that passes for love, and everyone is absurdly skinny, sexy and beautiful. Imagine a swimming pool of sparkling aquamarine set into a verdant hillside garden, and surrounded by ornamental human beings. ‘I didn’t know why I was coming to this party,’ says BV, ‘and then I saw you – and that’s why.’ Half his words are swallowed in ambient sound, lost on the breeze as he turns away from the mic. Unfortunately, regardless of the depth of his sincerity – and Gosling makes a reasonable stab at soulfulness – it is difficult not to cringe. 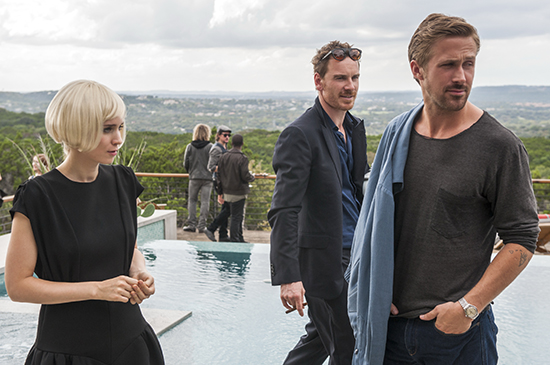 ‘Reaching for air,’ Faye continues, turning in circles, the camera circling her. She aspires to know the right people. ‘I want the experience... I want to live. I want to live at any price,’ she says. And there’s the rub. She is somehow incapacitated, stymied by desire, ambition and her inability to decide where true love and real life reside. Are fame and fortune worth the sacrifice of spirit and connection, asks Malick.

The real moments, the seemingly authentic interactions, are provided by iconic figures who are neither young nor beautiful: Val Kilmer, John Lydon, Iggy Pop. Patti Smith speaks of love and loss with disarming candour, picks up her guitar and starts noodling. ‘I can go on for hours with one chord,’ she tells Faye in what must be the best line in the film.

Snippets of contemporary music waft over the evolving scenario, but the song that lays it out is Del Shannon’s paean to loss, his 1961 hit ‘Runaway’: ‘I wonder / A what went wrong with our love / A love that was so strong / And as I still walk on, I think of / The things we’ve done together / While our hearts were young ... And I wonder ...’ Mawkish perhaps, but also oddly affecting.

Parties, drives through the countryside, motel rooms, a stage, a punch-up, sex and love are equally weighted. The women are almost interchangeable, not so much of a type as flattened by Lubezki’s constantly moving, caressing, distorting camera angles. Even the unique Cate Blanchett, in a supporting role as BV’s rebound love-interest, looks disturbingly like BV’s mother (Linda Emond). At best this is adoration of a homogenous female beauty, at worst simply voyeurism. 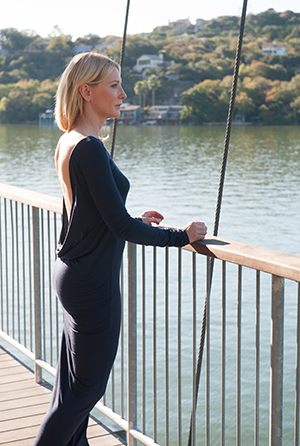 Cate Blanchett in Song to Song (Roadshow Films)Reality, time, and relationships are fluid. Voiceovers trickle information like droplets into a pool, ripples spreading out and disappearing. What are we to make of this? Are we in a kind of dream? Characters prevaricate, speaking as if they are somnambulists. We are lost in their incoherence but given time, and the accretion of details, meaning emerges. Things change. Death happens, even to the beautiful people. This is the dance of life, the camera implies. That should have been the finale, but Malick insists on a coda: return to the simple life of family, children, and hard, honest work, and you will be redeemed. It’s Malick’s evangelical mission to convince the audience of this seductive load of crock.

The pertinent question remains, does Malick achieve his goals? Having missed several of his offerings since The Tree of Life (2011), about which I had minor reservations, I had prepared myself for full immersion in the auteur’s vision, determined to allow the dreamscape to flow, so to speak. And yes, inevitably in a project of this nature, there were jarring moments though, I suspect, different for each viewer. In the end, what I continue to admire is not the product but the attempt: to question, to answer imperfectly, to experiment, to be true to his concept. If Malick does not always succeed so be it, that too is part of the process, part of being an artist, and I dare say, part of being alive.