Mother!, the new film from Black Swan director Darren Aronofsky, premièred a week ago at the Venice Film Festival. It was met with a smattering of boos, followed by mostly rapturous reviews. Aronofsky’s earlier films – Requiem for a Dream, The Wrestler, Noah – were developed over years, he said, whereas the script for this one poured out of him in five days, fired by an overwhelming anger about the state of the world. The result is surely the most outré studio release in years, a florid psychodrama whose very existence is a testament to the clout of its leading lady, Jennifer Lawrence.

In a reflexive twist, Lawrence, with whom Aronofsky is now in a relationship, plays the partner of a Great Artist (Javier Bardem), a poet attempting to beat writer’s block in a remote farmhouse that is being renovated by his adoring wife. Their idyll is interrupted by a knock on the door from Ed Harris, a stranger who turns out to be a fan. Javier (none of the characters is given a name) blithely invites him to stay, to the surprise of Lawrence, who wishes she were at least consulted. Before you can say ‘huh’, Harris’s wife (Michelle Pfeiffer) has moved in as well. She proceeds to ask Lawrence overfamiliar questions about her state of childlessness and her relationship generally.

This mysterious couple seems particularly interested in a crystal-like shard, streaked with molten fire that has pride of place in Javier’s study. Despite warnings not to touch, the guests smash it to bits on the study floor and are told to get out. Instead they shut themselves in their room. Lawrence is attempting to pry the pair out when their bickering adult children barge in, played by real-life siblings Domnhall and Brian Gleeson (sons of Brendan). Their hatred for one another culminates in a bout of biblical bloodletting followed by a wake, which provides the pretext for even more strange people to cross the threshold.

Her husband’s open-house policy dismays the titular Mother (as she’s listed in the credits), whose sense of reality begins to crumble. In its place is what Aronofsky has called ‘dream logic’, with a fluid sense of perception and time signalled by frequent fade-outs to a white screen. The spiral here is reminiscent of the one endured by Natalie Portman’s frayed ballerina in Black Swan, but where that film knew how to have fun, unafraid to go for giallo scares or kink, Mother! reaches for the metaphysical but forgets to give any of its characters enough detail to make you believe in them, much less care. Aronofsky also wrote Noah and 2006’s equally ambitious The Fountain, but he worked with writers on The Wrestler and Black Swan, and one wishes he would again. 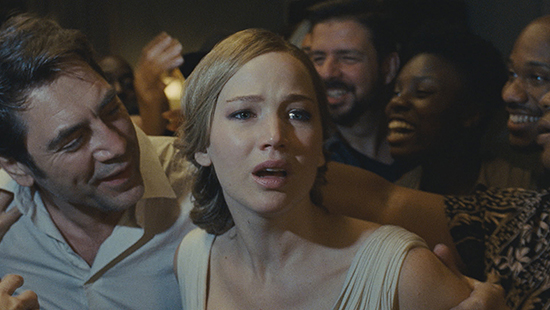 Lawrence never leaves the home, and Aronofsky has cited Bunuel’s 1962 film The Exterminating Angel, in which guests enter a house and find themselves unable to leave, as an influence. But the director doesn’t so much elaborate on that premise as endlessly try to top it, with an escalating series of incursions that expand in scale if not in interest. The wake is finally disbanded when the guests start breaking the fixtures, but literary groupies of the most aggressive, shirt-rending kind soon replace them. Pretty soon the house is a war zone, with bullets flying and SWAT boots on the ground as Lawrence, now pregnant, tries to survive amid the mayhem. The strangeness expands, but there is no deepening of character, just duress.

That’s all Lawrence has to play, in fact, and she does it very well. Ditto Michelle Pfeiffer, who gets lumped with Malevolence. Her relationship to Lawrence’s character echoes the one between Mia Farrow and Ruth Gordon in Rosemary’s Baby, and Aronofsky steals a couple of off-kilter shots from Polanski’s film, shooting characters obscured by doorways in a manner that tempts the viewer to lean sideways for an unimpeded view. Otherwise, the director and his long-time cinematographer Matthew Libatique favour a series of claustrophobic close-ups, sticking mostly to Lawrence’s face and shooting outside the house only briefly. 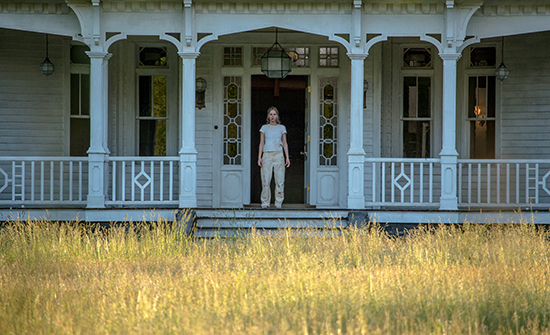 Aronofsky and his editor Andrew Weisblum (Moonrise Kingdom, 2012) end the film by having it double back on itself: repeating earlier images and scenes in a way that underlines Bardem’s likeness to the character played in Rosemary’s Baby by John Cassavetes – the devil’s pimp. But the screening I saw provoked laughs instead of screams. At once overripe and undercooked, Mother! tackles the selfishness of the male artist by showing Lawrence bashed by a mob of his supporters, and the commitment of the character to her husband and actress to role begins to blur. Each is whistling in the wind.