In 1905 a Danish prince was elected to the throne of Norway. The King’s Choice begins with grainy archival footage of the arrival of the new royal family. The streets are lined with people. The cheering crowd scenes segue into a different kind of rally, and then Adolf Hitler’s familiar hectoring face fills the screen. Norway, like many smaller nations, was neutral at the start of World War II. Neutrality did little to prevent invasion. When a German naval flotilla arrived in Oslofjord on 9 April 1940 and was fired upon by Colonel Birger Eriksen (Erik Hivju) and the recruits under his command at Oscarsborg Fortress, King Haakon VII was sixty-eight years old and suffering from severe back pain. The successful torpedoing of the cruiser Blücher delayed the German invasion long enough for the government and the royal family to escape before Oslo fell. The King’s Choice follows the ensuing pandemonium of the next three days.

Director Erik Poppe honed his eye for composition as a newspaper photographer and cinematographer for commercials. He has directed four feature films to date, including A Thousand Times Good Night (2013), with Juliette Binoche in the role of a photo journalist who is torn between her addiction to war zones, her duty to the people she photographs, and her family. Duty, with its sense moral obligation, service, and self-sacrifice, is rarely the focus of contemporary film or literature. Responsibility is the preferred concept, compatible with accepted notions of blame and accountability. But it is the burden of duty that occupies Poppe’s major characters, including the Norwegian king and the German envoy charged with negotiating a peaceful capitulation.

That we care about the fate of the royal family is due largely to veteran Danish actor Jesper Christensen, who plays Haakon with a complex range of emotions from doting grandfather to severe father, subtle diplomat, imperious monarch, and a man on whose conscience the responsibility for a nation’s welfare weighs heavily. Christensen has the craggy features and rheumy-eyed gravitas suited equally to kings and crims, and will be remembered for his supporting roles in Lars von Trier’s Melancholia (2011) and Nymphomaniac (2013), and as the pokerfaced Mr White in the James Bond films Casino Royale (2006), Quantum of Solace (2008), and Spectre (2015). The Norwegians are less formal than what cinematic versions of the British royals would lead us to expect; we see the king first as a family man, not above rolling around on the floor with his grandson. His black-clad figure, silhouetted against a snowy landscape as he plays hide-and-seek with his grandchildren, prefigures the game of cat-and-mouse the king will soon be playing with the soldiers sent to capture him. Snow is the uncredited star of the film, an icy contrast to cosy interiors and fiery bomb blasts. Poppe and his cinematographer, John Christian Rosenlund, use the frozen countryside as a grand, dramatic backdrop to the royals’ flight.

‘Let’s not end up on the wrong side in this war,’ says Anneliese Bräuer (Katharina Schüttler) to her husband, career diplomat Carl Bräuer. The marvellously sunken-cheeked and crooked-nosed Karl Markovics (Wolf in The Grand Budapest Hotel, 2014) plays ‘Herr Envoy’ with increasing agitation, caught as he is in an unenviable position between duty to his uncompromising and unreasonable führer, his respect for Norwegian sovereignty, and his desire to save his family and his life. In his attempts to negotiate first with the government and then directly with the beleaguered king, he is at odds with his counterpart Lieutenant Colonel Hartvig Pohlman (Andreas Lust), who is intent on a military takeover. 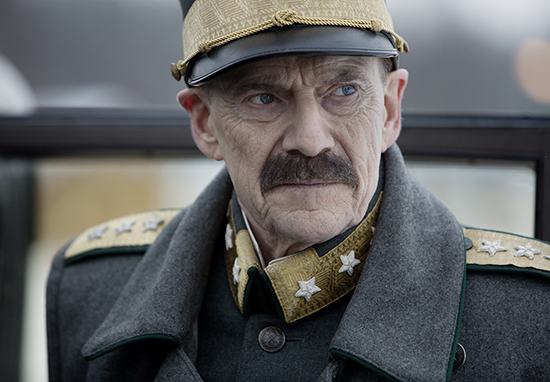 The mechanics of war and diplomacy are superbly realised, with more suspense than a retelling of the facts might imply. Poppe’s technique of alternating intimate family scenes and subdued conversations with battle scenes creates palpable tension. The claustrophobically tight cinematography makes the viewer part of the action, the camera weaving between figures, focusing only for seconds on a body, a building, a face, flitting from object to object in a vain attempt to find purchase in the chaos. As Johan Söderqvist’s expressive soundtrack thunders in response to the bombing, we find ourselves flinching in our comfortable cinema seats as if we were under attack and party to the characters’ terror.

When Bräuer finally finds the king and presents Hitler’s demands, Haakon is forced to make the decision we have been waiting for: to capitulate and save his countrymen from further bloodshed, or to resist. He reminds the cabinet of Hitler’s earlier words to the effect that ‘a nation that yields to an aggressor does not deserve to live’, and makes it clear that he will abdicate in the name of his whole house before appointing Hitler’s pawn, the leader of Norway’s fascist party Vidkun Quisling as prime minister. 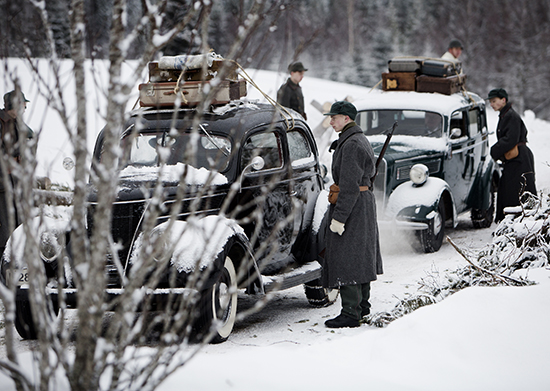 The outcome is, of course, a matter of historic record, but as Poppe says in the coda which stands as his directorial statement, this is not a documentary, but only one version of events – and there will be others. The King’s Choice may not have the impact of Andrzej Wajda’s harrowing but brilliant Katyń (2007), but it is nevertheless an impressive and affecting piece of historical cinema.