Of all Richard Wagner’s operatic works, it is Parsifal that divides audiences most. As with the Ring, its ambiguity lends itself to multiple interpretations. The music has been praised and admired by the greatest of critics and musicians, including those who heard it when it was new: Mahler, Sibelius, Berg, Debussy, George Bernard Shaw. It is the text, drama, and characters, the overblown religiosity, ritual, the piousness and passivity of the hero and his denial of sex and sexuality that cause the problems. Indeed, the only character Debussy found sympathetic was Klingsor, the evil one in the piece who has castrated himself in order to achieve power by his immunity to sexual desire. Whatever Debussy thought of the text, however, the music captivated him, and musical references to Parsifal appear in Pelléas et Mélisande, which he composed after hearing the work of the Bayreuth master.

Wagner’s final opera, first performed in 1882 at the second Bayreuth Festival, was the longest of his works in gestation. He first read Wolfram von Eschenbach’s twelfth-century epic Parzifal in 1845. The first prose sketch for what became Parsifal followed in 1865, and a completed draft in 1877. In translating the poem into a workable text for opera, Wagner made several changes, the most interesting of which is combining several female characters into one: Kundry. She is the figure who laughed at Christ on his way to the Crucifixion and has been condemned to screaming and wandering ever since; she is the penitent Magdalen; the servant of both Klingsor and the Grail knights; the great seductress; and possibly Parsifal’s mother.

Parsifal is the clueless innocent (or ‘innocent greenhorn’, to use Shaw’s translation of der reine Tor) who stumbles into the drama and by his actions (or more truthfully inaction) brings about redemption and the establishment of a new order. This is a similar theme to the one Wagner used in the Ring, where comparisons can be found in the pairings of characters: Klingsor and Alberich, Parsifal and Siegfried, Kundry and Brünnhilde. However, Kundry, although at times enslaved, is self-aware throughout the opera, and it is Parsifal who gains insight and understanding through compassion (Durch Mitleid wissend). Parsifal is a noble role: his only misdemeanour is shooting a swan in a holy place. His insight comes like a thunderbolt from Kundry’s kiss in Act II, when, suddenly, he understands the significance of Amfortas’s wound (Amfortas! Die Wunde! Die Wunde!). Like the Ring, Parsifal also has its share of magic, as well as a good deal of sickness and blood (the Grail and the bleeding wound), and of course the Holy Grail itself for which the knights are there to defend.

In Act I we are introduced to the realm of the Grail Knights who have been in a sorry state ever since Amfortas, son of Titurel, succumbed to Klingsor and lost the holy spear which had pierced Christ’s side at the Crucifixion. Klingsor then turned the spear on Amfortas. The wound will never heal. Amfortas, in agony, longs for death. Kundry has been searching everywhere for a balm to heal the wound. Parsifal enters and blithely shoots a swan. Gurnemanz upbraids him for this action in a holy place and takes him to observe the Grail ritual. Parsifal watches it all but does not appear to understand its significance. 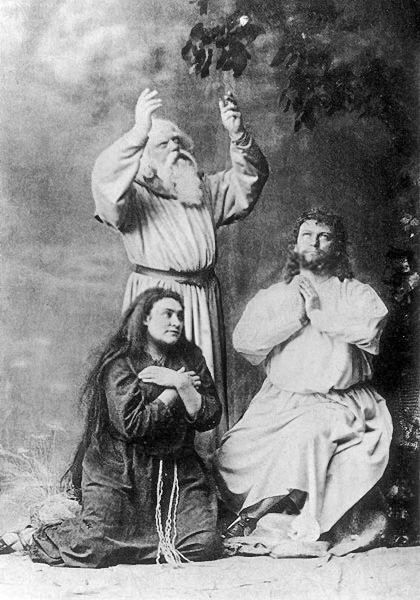 Amalie Materna, Emil Scaria and Hermann Winkelmann (right) in the 1882 premiere production of Parsifal in BayreuthAct II of Parsifal is one of the greatest and longest seduction scenes in all opera, even though it is in vain. Kundry’s operatic precursor is the Queen of the Night, who, in a few minutes, fails in her quest to persuade her daughter to commit murder. Having approached Klingsor’s castle, Parsifal must run the gauntlet of a bevy of flower maidens whose lovers he has just slain. They fade away soon after Kundry enters when, in a miraculous vocal line, she calls him Parsifal, his true name. Kundry, knowing Parsifal is no ordinary Grail knight, has a war chest of seduction methods. She tells him of the heartache his mother endured when he left her. Kundry does get to kiss Parsifal, but this awakens so much understanding in her victim – lust and desire as well as compassion for the living-dead Amfortas – that Parsifal, in an agonising realisation, realises that he must deny her approaches and be chaste. Kundry’s brilliant last seduction tactic is to explain that if he gained such understanding from just one kiss imagine what he would learn in a mere hour with her. In spurning her, Parsifal releases Kundry from her endless wandering and wailing and smashes Klingsor’s power.

Act III occurs many years later. Parsifal, who has been wandering around the world, returns to the realm of the Grail knights on Good Friday, carrying the holy spear. Titurel, the former king, has died. Amfortas and the Grail knights are more enfeebled, for Amfortas has refused to open the life-sustaining Grail. Parsifal heals Amfortas’s wound with the tip of the spear and becomes king, inaugurating a new and revitalised regime.

Parsifal’s journey to Australia has been a slow one. Many may have seen Hans-Jürgen Syderberg’s cult filmed version of 1982. The first and only complete Australian fully staged performance, mounted the State Opera of South Australia in Adelaide in 2001, was memorably conducted by the late Jeffrey Tate (three years after his Ring there), but marred by Elke Neidhardt’s unsympathetic production. As recently as December 2016, the Melbourne Symphony Orchestra, under the baton of Simone Young, performed extracts from Act II with Michelle DeYoung as Kundry and Stuart Skelton as Parsifal.

Jonas Kaufmann, fresh from his first Otello at the Royal Opera House, made a welcome return to Australia following his triumphant début here for Opera Australia with recitals in Sydney and Melbourne. Kaufmann was joined on the Concert Hall stage by Michelle DeYoung (Kundry), Kwangchul Youn (Gurnemanz), Michael Honeyman (Amfortas), Warwick Fyfe (Klingsor), and David Parkin (Titurel). Kaufmann first sang the title role at the Metropolitan Opera, New York, in 2013 to considerable acclaim. 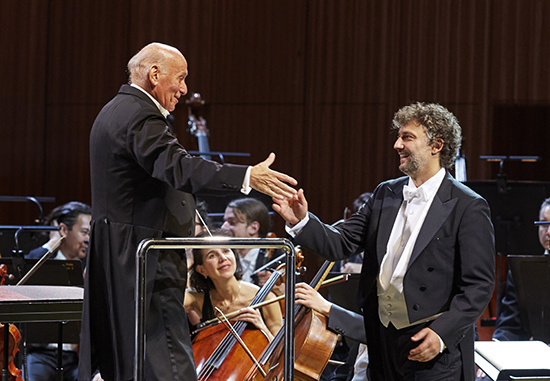 All the singers were in fine voice. Gurnemanz, is the central figure who narrates much of the history in Acts I and III, was commandingly sung by Kwangchul Youn. It is Guremanz who meets Parsifal on both occasions and leads him to the Grail ritual. Michael Honeyman gave a thrilling performance as Amfortas in his long, crazed aria on his endless suffering. His final Ermbarmen! (Have mercy!) was heart-wrenching. Warwick Fyfe's Klingsor was a dramatic and powerful interpretation. Michelle DeYoung inhabited the role of Kundry, showing great lyrical beauty as the seductress as well as in the screaming extremes elsewhere in this demanding role. As Parsifal, Jonas Kaufmann was magnificent both vocally and interpretatively, showing the transformation from innocent youth to compassionate saviour. The German tenor maintained beauty of tone and focus throughout, both in the passages of greatest volume and intensity and in those of great delicacy, most effectively the final and tender öffnet den Schrein! (Open the shrine!). The rest of the cast – knights, esquires, flower maidens, Opera Australia chorus, and children’s chorus – was strong and impressive throughout. 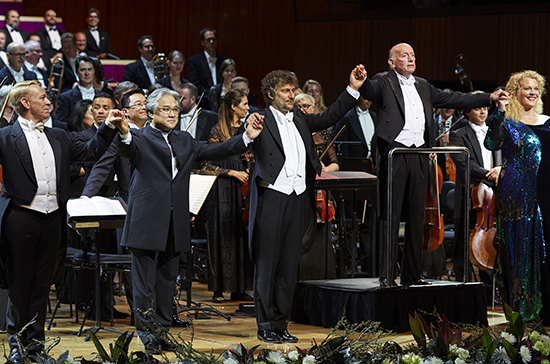 The other star role was the Opera Australia Orchestra under the baton of Pinchas Steinberg. The playing was superb, particularly the wind sections, and Steinberg shaped this long opera with an assured hand. The pacing was perfectly measured, with careful attention to performance details of phrasing and dynamics. Rarely has four and a half hours of opera been so engrossing from start to finish.

This is a performance not to be missed.

Parsifal is presented by Opera Australia in the Concert Hall at the Sydney Opera House on 9, 12 and 14 August 2017. Performance attended: 9 August.