The Merchant of Venice is a troublesome play. I have seen productions that have played up the comic aspects to an absurd and irritating degree while confining Shylock to the stereotype that bears his name. Some interpretations exploit the play as anti-Semitic propaganda. And none of the productions I have seen have united the two main narrative threads to any satisfying degree. Not surprisingly, The Merchant of Venice has remained one of my least favourite of Shakespeare’s plays.

What a difference an evening can make.

Bell Shakespeare’s new production under the inspired direction of Anne-Louise Sarks is a brilliant, illuminating, dramatically compelling interpretation in which the comic and tragic are perfectly balanced. It has made me see the play anew.

Sarks’s production reveals a culture of entrenched racism and discrimination, a culture in which the penalties of being an outsider never subside. Before Shakespeare’s opening lines are uttered, all the Christian characters, each wearing a prominently displayed crucifix, kneel down and recite the Lord’s Prayer. Shylock and his daughter, Jessica, remain off to one side, shut out from this act of social cohesiveness because they are Jews. And playing in the background is a Semitic melody, gentle and beguiling and signposting the sympathy this production engenders for Shylock.

The Christian characters flaunt their disparagement of Jews, tossing off insults with fun and frivolity. In contrast, there is a gravitas to Mitchell Butel’s Shylock, a quiet meditative almost inward-looking aspect to him. (Michael Hankin’s costumes are powerfully effective here. Shylock is dressed as an orthodox Jew, a sedate-looking figure when compared to the other male characters in their sharp suits.) From the outset, audience sympathy is with Shylock; by the time he mercilessly demands his pound of flesh we understand him and are firmly on his side.

Shylock is not the only outsider. Sarks has introduced a subtle homoerotic element into the character of Antonio. This is no kowtowing to modern sensibilities; on the contrary, the homoeroticism works so well within the drama of the play that one wonders at not having seen it before. As for women being outsiders, Portia and Nerissa gain in power only when they pass as men. There is a delightful touch when the women reveal a wry, sensual pleasure as they discard their female garb and replace it with male attire. A sort of feminist striptease. 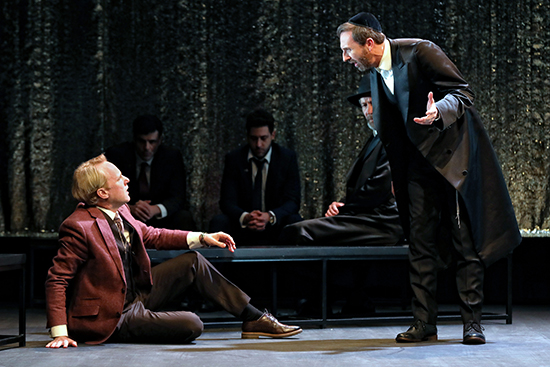 I have never considered this play a comedy, but there are laugh-aloud moments to the Bell production. Jacob Warner’s Launcelot alone would be sufficient to convert me to the comic aspects of this play.

It is you who have made me what I am, Shylock suggests. Far from shying away from the complex relationship between oppressor and oppressed as so many productions have, Bell Shakespeare’s Merchant of Venice makes it central. 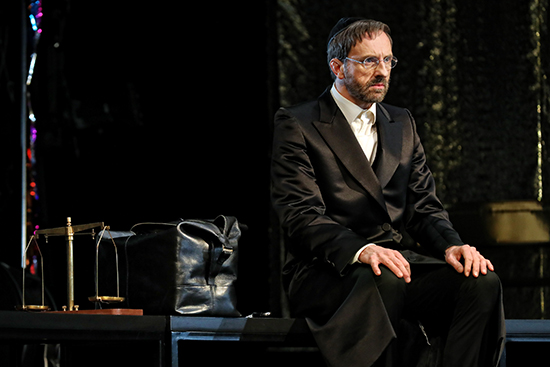 This is a gripper production. The acting is superb, the stagecraft sublime. The music extends the drama and texture of the narrative in a subtle yet effective way. The stage is uncluttered and deceptively simple. At the rear hangs a full-length curtain of gold; centre-back is a narrow rectangular trolley on wheels carrying the three caskets which will determine Portia’s marital fate (this is brought forward when the action demands it). All the characters remain on stage throughout; if not involved in the action they are seated on benches that line the perimeter. This helps to bring the two narrative strands of the play together. Indeed, in the final scene, when all the Christians are whooping it up having made their fortunes and defeated the Jew, Shylock sits bent and broken and absolutely still at the back of the stage. You cannot forget that the cost of their delight is the ruin of a man.

This production is not to be missed.

The Merchant of Venice (Bell Shakespeare) continues at the Fairfax Studio, Arts Centre Melbourne until 30 July 2017, The Playhouse, Canberra Theatre Centre from 13 to 21 October, and The Playhouse, Sydney Opera House from 24 October to 26 November. Performance attended: 20 July.