Merrily We Roll Along (1981) isn’t Stephen Sondheim’s biggest flop. That honour goes to Anyone Can Whistle (1964), which closed after nine performances. Merrily outlasted it by seven performances, and of the two shows has since gone on to much greater critical acclaim. It’s the better piece; despite some great songs, Anyone Can Whistle is a bizarre outlier in Sondheim’s canon, but Merrily contains all the bitterness and disillusionment fans have come to crave in the composer’s work. A profound sense of sadness surrounds the show; that original Broadway production saw the end of Sondheim’s collaboration with producer Hal Prince, fitting given that the severing of a great professional partnership is the show’s central theme.

An adaptation of George S. Kaufman and Moss Hart’s 1934 play, Merrily tells the story of composer Franklin Shepard (Lyall Brooks) and his fracturing friendship with his writing partner Charley Kringas (Nelson Gardner) and long-term buddy Mary Flynn (Nicole Melloy). As in the original, the story is told in reverse, with the embittered, poisonously cynical characters who open the play slowly reverting to their naïve, idealistic former selves over the course of the evening. Moving from 1980 back to the day of Sputnik’s launch in 1957, the musical pivots on the key moments in Frank’s career, as he moves from bloated, miserably middle-aged film producer to ebullient and optimistic young composer.

There are two options when casting Merrily: you either cast young and hope the actors are capable of the maturity needed for the early scenes, or you cast mature actors and trust the audience to imagine the years falling away as the show progresses. Watch This Theatre Company settle on the latter, and it’s the right decision. Having performers straight out of high school was one of the major contributing factors in the original production’s failure, as grinding existential weariness seems incongruous in fresh-faced youth. 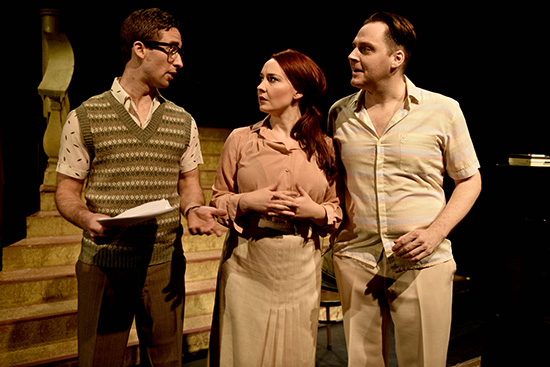 Nelson Gardner, Nicole Melloy, and Lyall Brooks in Merrily We Roll Along (photograph by Jodie Hutchinson)

Not that canny casting entirely solves the problems of this piece. George Furth’s book tends to tinker around the edges of the characters’ motivations, happily stating things without exploring them. And the play’s structure is never convincingly executed; Sondheim’s complex use of leitmotif, of theme and counter theme, isn’t followed through in the dialogue, so that the minute failures of self that inform the songs carry little dramatic weight. There is undoubtedly an allegorical thrust to the play – Sondheim talked of the show as being about ‘what this country is always in danger of ... which is expediency’ – and a number like ‘Bobby and Jackie and Jack’ brings the political nostalgia of the Kennedy era into sharp relief. For the most part, however, these wider resonances remain latent.

This leaves us with the characters, and not too many of them are sympathetic. Brooks has the toughest gig, bringing the dismissive and self-absorbed Frank to life. When we meet him, he is a pompous shell, but even as we track his journey back to wide-eyed idealist we get little sense of his charisma or appeal. Melloy fairs better as the alcoholic and unrequited lover, Mary; her droll cynicism seems perfectly justified in this world of parasites and sycophants. Best of all, though, is Gardner as the thoroughly decent, quietly exasperated Charley. He brings total authenticity and precision to the role, nailing the fiendish ‘Franklin Shepard Inc.’ and suggesting the declining years with subtly and nuance.

Watch This is a company dedicated to bringing more obscure Sondheim musicals to Australian audiences, and they have a fairly solid record of delivering on their commitment to quality. The 2013 Assassins was terrific, and the rarely seen Pacific Overtures earned them a Green Room award in 2014. But they never use the same director twice, and this time they have put Sara Grenfell at the helm. It is not a great fit; Grenfell pushes minor characters so far into caricature that they tend to buffoonery, and her blocking is awkward and unconvincing. The opening scene at Frank’s party is disastrous, the performances shrill and overwrought. Things improve, and many of the quieter numbers are poignant, but too often the tonal register is off. Sondheim’s laughs are rarely cheap, and his sentiment never. It’s a lesson Australian directors of his work consistently ignore.

The last two Watch This productions were designed by the masterful Eugyeene Teh, whose influence and taste are sorely missed this time around. Emily Collett’s set design is inexplicably awful; a giant creaking staircase takes up half the stage, and actors ascend and descend it needlessly throughout. Hideous chandeliers hang forlornly from the ceiling, and unconvincing props are constantly wheeled in and out of scenes that don’t require them. David Wynen’s choreography is utterly stymied by that staircase, and the result is often desultory. 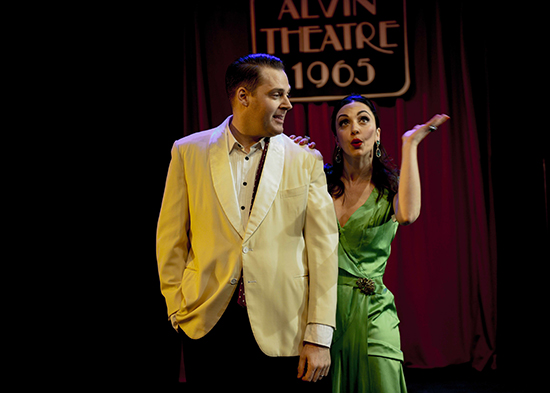 Merrily We Roll Along is a difficult musical to pull off, with only a handful of successful productions in its history. It has a tricky structure that often works against narrative expectations and a central character who is unsympathetic for most of the running time. But it also has a magnificent score, here played entirely on a piano that manages to convey the elegiac charm of youth, even as it undermines its efficacy. As the characters’ optimism and energy grow, so too does the heartbreaking sense of loss and ruin for what will become of them. Sondheim’s great preoccupations – age and memory, integrity and expediency, loss and love – are everywhere in evidence, and even a flawed rendition has the power to move.

Merrily We Roll Along (Watch This), directed by Sara Grenfell and adapted from the 1934 play by George S. Kaufman and Moss Hart, continues until 15 July 2017 at the Southbank Theatre, The Lawler. Performance attended: 30 June.