It is not every day that Sydney audiences witness the première of a composition by a major twentieth-century composer, yet this is what happened on 30 June in the Opera House: one of Igor Stravinsky’s earliest works, the Funeral Song, op.5, received its first performance on Australian soil.

As has been widely reported in the media, this short work was written in memory of Nikolai Rimsky-Korsakov, who was not only Stravinsky’s much-admired composition teacher, but also someone personally very close to the young composer. Upon Rimsky-Korsakov’s death in 1908, the Funeral Song, Stravinsky’s farewell message to him, was first performed. It was not heard again until the score’s miraculous rediscovery on the back shelves of the library in the St Petersburg Conservatory in 2015. Valery Gergiev and his Mariinsky Orchestra played it in December 2016; since then orchestras around the world have vied to perform it. Charles Dutoit, the conductor of this concert, conducted it in early 2017 with another SSO, the Singapore Symphony Orchestra.

It is tempting to look for hallmarks of Stravinsky’s extraordinary later works, above all the great trio of Firebird, Petrushka, and The Rite of Spring. However, the gulf between them and Funeral Song is obvious. With hushed tremolos, some unusual instrument combinations, and a characteristic theme (first performed with the beautiful sonorities of a muted solo horn, then repeated many times by other instruments), Dutoit and the Sydney Symphony Orchestra gave a well-executed performance. Despite being written with care by the already professional hand of the talented young composer, this work is not in the same league as the great ballet scores.

This première was not the only reason why this concert had attracted extraordinary attention among Sydney-siders; the elusive Martha Argerich was advertised to make her long-awaited Australian début in Beethoven’s Piano Concerto No.1 in C major, op.15. Ten days before the concerts, she withdrew, and not for the first time. Undeterred, the SSO scored a minor coup by engaging another star, the young Chinese pianist Yuja Wang, to replace Argerich. The notice was short, the trans-continental journey arduous, and Wang even agreed to play the same concerto, rather than another work from her current touring repertoire.

Wang is quite possibly the most scintillating personality on the international circuit today. She is as elf-like as her playing, and her stage temperament as colourful as her concert attire. After a rather slow orchestral introduction, Wang’s first solo entry was surprisingly understated, but her light touch on the keyboard made every note transparent. Rightly, her interpretation did not portray the heroic Beethoven of later decades, but the supremely talented young man who was still under the influence of Haydn and Mozart in the last years of the eighteenth century. The orchestra (sensibly, much smaller than the one after interval) may have been surprised too; it was slow to react on a few occasions and did not fully respond to Wang’s nimble playing. Long notes resonated beyond their written length at times, sounding sticky, and the collective body of string sound in the emotionally charged theme of the slow movement felt slightly overweight. 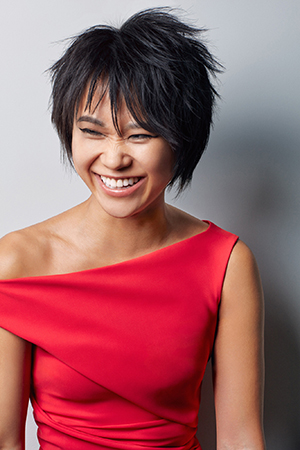 Yuja Wang (photograph by Kirk Edwards)Wang’s playing was supremely confident and devoid of technical problems, but at this stage of her burgeoning career this is not the repertoire where her artistry seems most comfortable; her poetic invention rarely went beyond conventional solutions. Yet there were some delightful surprises in her performance; for example, just before the recapitulation section in the first movement she cheekily took the ‘glissando’ instruction in the score unusually and literally, and performed a double glissando (reminding me of Gershwin effects) with the back of her thumbs. As a different musical gesture, in the equivalent place in the second movement, leading back to the orchestra’s theme, she played the softest, tenderest repeated solo notes that I have ever heard in a concerto performance.

Wang’s two encores reflected different styles and phenomenal control of the keyboard. Sergei Prokofiev’s Toccata in D minor, Op. 11, is one of Martha Argerich’s frequent encores; it served as a subtle tribute to the distinguished pianist she had replaced. The second encore was her own ‘party piece’: Franz Liszt’s brilliant transcription of Schubert’s Gretchen am Spinnrade.

After interval, in the two Suites from Manuel de Falla’s The Three-Cornered Hat, the orchestra was fully energised by Dutoit’s conducting. These movements offer a brilliant showcase for every section and many solo instruments, while casually presenting a miniature encyclopedia of Spanish dances. Dutoit’s effortless rubato direction brought the best out of his musicians; although no expert in Spanish dances, I was fully convinced by the stylistic elegance of the fandango (in The Dance of the Miller’s Wife movement), the seguidillas, farruca (a form of flamenco), and jota of the last movements. Dutoit shaped the melodies in a self-evident way, first with one hand, then the other, on occasion with his eyebrows and even with his shoulders. I suspect that had he not moved at all the sheer radiance of his personality would have driven the music. The strings of the orchestra played with the majestic sonority which has become their trademark in recent times, and excellent wind and brass solos added to the sheen of this vivid performance.

Maurice Ravel’s La Valse, the ultimate dance-parody of the entire music literature (Ravel dubbed it the ‘apotheosis of the Viennese waltz’), should have been a perfect complement to de Falla’s defiant ballet music; the works were even written at almost exactly the same time. Iberia’s wild dances versus a Frenchman’s morbid view of the waltzes of the Austrian Imperial Court – what better juxtaposition. Although the elastic freedom of the rhythmic patterns, the wide range of dynamics, the sonic orgasm of the brilliant orchestration, and the stylistic assurance of this performance perhaps even surpassed that of the previous piece, my impression was that it was too much of one style. There is only so much Schlagobers one can add to a generous slice of Sacher Torte.