Tate Modern excelled itself with its Giacometti retrospective. It’s not easy to take a familiar modern master and return a new and compelling view of his work. Many years ago, MoMA in New York failed the challenge abysmally. They had nothing new to say about the artist and went through the motions of a retrospective. Worst of all: you came away thinking that Alberto Giacometti (1901–66) was tired and obvious. How wrong could you be?

Tate Modern worked closely with the Fondation Alberto et Annette Giacometti with its cradle-to-grave collection of the master’s work, plus the rich archive of documents. During his lifetime Giacometti formed a strong personal bond with the Tate. In 1965, after an earlier retrospective, he wrote to Norman Reid, the modest but effective director: ‘May I tell you how much I enjoyed my visits to London and how touched I was by your kind welcome ... also how touched and grateful I am that you have chosen so many works for the Tate Gallery.’ The Tate had given him a room in the basement as a studio. The curator was David Sylvester, doyen of European art critics and deeply sympathetic to the work. Fifty-one years after Giacometti’s death, the bond between museum and artist still holds. Tate Modern’s account is intimate and revealing where MoMA’s was starchily institutional.

The early work, less familiar, less canonical, forms a long entrance passage. You are from the start aware of Giacometti’s hand kneading and incising his materiel. He roams freely through a variety of styles, from Bourdelle’s classicising realism to a lively encounter with Cubism to the first Surrealist plasters and bronzes. Giacometti was quick to grasp Miró’s importance and was the first to translate his graphic style into sculpture. The Couple (1927) astonishes still with its deft combination of primitive markings and modern form. By the early 1930s, Giacometti was established as the leading sculptor of Surrealism, with such resonant pieces as the open form but claustrophobic Cage (1931), which influenced so many artists from Noguchi to Francis Bacon. Giacometti embraced André Breton’s dictum that ‘beauty should be convulsive’. Violence and sexuality charge Giacometti’s Surrealist objects from the bronze Woman with her Throat Cut to the nasty and menacing Disagreeable Objects, giant dildos with studs at their tips. Breton excommunicated Giacometti from the Surrealist group when he returned to using models. The artists ignored their pompous pope and Giacometti exhibited regularly with his fellow Surrealists. The big rupture came with the German invasion of Paris in 1940. A Swiss national, Giacometti retreated to Geneva and into himself, making small, even tiny figures and heads, sensitively installed at Tate Modern. 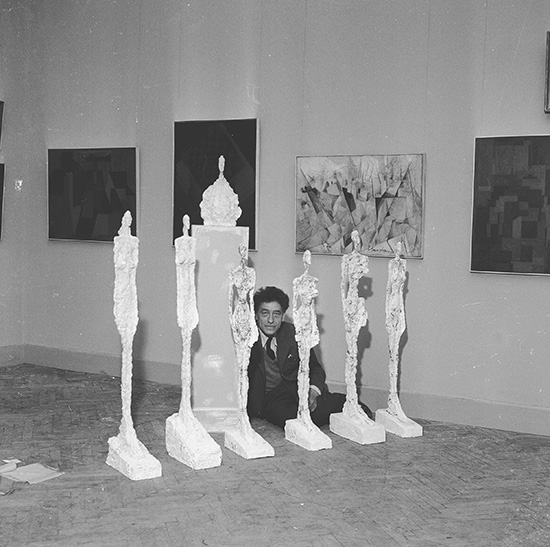 Giacometti returned to Paris in 1945. Jean-Paul Sartre and Simone de Beauvoir befriended him. The former wrote an influential essay on the artist, The Search for the Absolute, in which he made the penetrating observation that Giacometti’s elongated figures are conceived and created as though seen from a distance. The sculptures retain that distance from each other and the viewer, a condition of perpetual estrangement.

That quality in the postwar years (still resonant today) led to the characterisation of Giacometti’s work as ‘existentialist’. Now Giacometti's postwar sculpture and painting remind us more of Samuel Beckett and the bleak landscape his figures inhabit. Beckett and Giacometti became close friends before the war, roaming the demi-monde of Paris together after dark; they resumed their friendship after the war. Their one attempted collaboration – Giacometti’s design for the tree at which Vladimir and Estragon wait for Godot – was a disaster. They pulled it apart together in Giacometti’s studio.

The coup de théâtre of the exhibition was the reclamation of the important group sculpture Femmes de Venise. The six figures in plaster were the principal exhibition in the French Pavilion in the 1956 Venice Biennale. Later figures were added to the group; some were cast in bronze and are now widely dispersed. But the original plasters have not been shown in fifty years. Tate Modern found them, conserved and restored them. Naked rather than nude, stripped down to bone and breast, heads and legs, they were both the centre and the climax of the retrospective. Jean Genet summed them up:

... all of them are different, so that my hand travels through a highly varied, living landscape ... Seen in profile, the oscillation from woman and goddess is perhaps the most disturbing thing about them. Sometimes the emotion is unbearable ... I cannot stop myself coming back to these gilded – and sometimes painted – sentinels who, upright, immobile, are keeping watch.

A day or so before I saw the Giacometti exhibition, I had been in Tate Britain. The tomb-like rooms given to those huge dumps and clunks of bronze bearing Henry Moore’s signature looked grandiose and oppressive in comparison with Giacometti’s spare, puzzling Pointing Man or Walking Man. Those sculptures still ask the viewer the existential question: who am I? what am I? 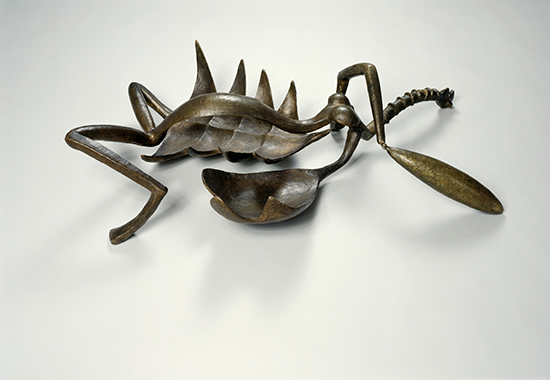 A pleasantly dotty catalogue accompanies the show. In an age which believes in the multi-authored catalogue, Giacometti outdoes everybody with forty-one contributors. They compile an almanac, an A–Z of topics and persons with a bearing on Giacometti’s career. There are some oddities and omissions. Sartre and de Beauvoir get an entry, but Beckett does not. Cézanne gets a common and garden entry, but not Miró. Nonetheless, it makes for easier and livelier reading than the majority of contemporary catalogues straining for originality and effect.