In 1948, the Nobel Prize-winning poet and Chilean senator, Pablo Neruda, proud member of his country’s Communist Party, accused his government of treason for forging an alliance with the United States. Shortly after, Neruda went underground to escape arrest. For thirteen months he fled from one clandestine safe house to the next. He grew a bushy beard and pretended to be an ornithologist, Antonio Ruiz Legarreta. Under the guise of this false identity, he crossed the frozen Andean Pass of Lilpela on horseback, from Chile to Argentina, to go into exile.

The story of Neruda’s persecution and exile is well documented, and Chilean director Pablo Larraín turns it into the kernel of truth for his fictional biopic, Neruda. Larraín is one of the most important filmmakers in Latin America today. This year he received much acclaim for another biopic, Jackie (2016), starring Natalie Portman as Jackie Kennedy. As a biopic Neruda runs along very different lines to Jackie. To begin with, the film plays with traditional elements of hardboiled thriller and noir. The story is narrated in voiceovers by detective Óscar Peluchonneau, a fictional character played by Mexican actor Gael García Bernal. Peluchonneau is in charge of capturing Neruda, who is played by Chilean actor Luis Gnecco. The film hinges on the interesting contradictions of this love–hate relationship between Peluchonneau and Neruda. Peluchonneau, à la Inspector Javert, is obsessed with arresting the ever-elusive Neruda. But soon it becomes apparent that his obsession goes beyond the call of duty. Each time he flees one of his hideouts, Neruda leaves a clue enabling Peluchonneau to keep pursuing him; and every night, after a fruitless chase, Peluchonneau goes back to his bachelor’s garret to marvel at his prey’s poetry.

This is not the first time García Bernal and Gnecco have shared the screen. In 2012 Larraín directed another historical film set in Chile, No, which tells the story of the advertising campaign against the country’s 1988 plebiscite to allow dictator Augusto Pinochet to be re-elected. García Bernal has built a steady reputation over the years, and his Peluchonneau does not disappoint. An element of his performance that unfortunately will go unnoticed for English audiences is his mastery over accents in Spanish. He has shown this before in Pablo Almodóvar’s Bad Education (2005), where he plays a cut-throat actor from Madrid, and as a young Ernesto Guevara in The Motorcycle Diaries (2004), with the singsong pronunciation typical of Argentina. In Neruda, his sibilant Chilean accent sounds perfectly natural among the other members of the cast. 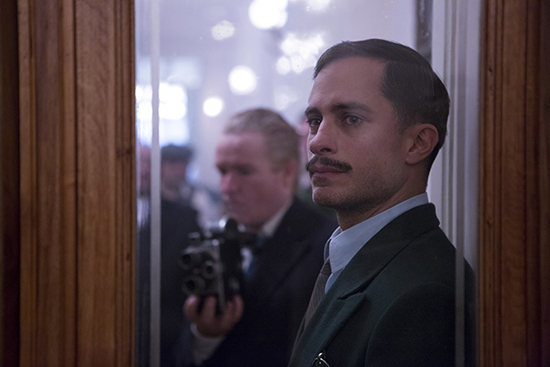 The biggest accolade, however, goes to Gnecco. His Neruda is composed of two very different characters: first, the people’s poet, hedonic hero of the resistance, and sensualist who likes to hold court and ensnare listeners with the same verses he has been reading for the past twenty years; and second, a middle-aged, afraid of intimacy with his wife, addicted hero worship in the country he loves, and terrified of being forgotten. The film contrasts these two facets of Neruda, unafraid to confront the image of the popular idol. An impoverished member of the persecuted Communist Party begs Neruda for his autograph, then asks him what will happen when the communist dream is realised: will everyone starve like her, or will they prosper, like Neruda? His answer is the essence of champagne socialism: ‘No, everyone will live like me, eat in bed, and fuck in the kitchen.’

Neruda, like the man, is not easy to pin down. The film is poetic and self-reflexive, with moments of intense humour. Sergio Armstrong’s cinematography is elegant: stark, melancholy shots of the snow-capped Andes, and cherry blossoms blooming in Santiago. The eclectic score by Argentinian composer Federico Jusid is a delight. It includes passages from Ives, Grieg, and Penderecki (notably, the Passacaglia from his third symphony), a cello concerto by Gavin Bryars performed by Julian Lloyd Webber, and a number of pieces by Jusid himself. In the speedy first half, the persecution of the poet defies the conventions of crime fiction and creates a steady momentum. Eventually this dissipates, and the narrative subsides into a metafictional abyss that feels more like Jorge Luis Borges than Pablo Neruda. Conceptually, this is the most interesting part of the film, but it is to the detriment of the storyline, which gets bogged down for half an hour before reaching an unexpectedly satisfying conclusion. 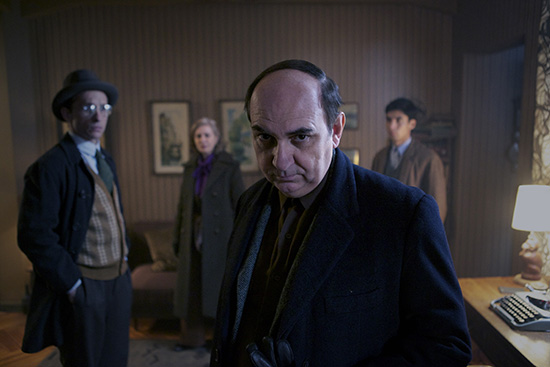 Neruda, 108 minutes, directed by Pablo Larraín. Distributed in Australia and New Zealand by Palace Films. In cinemas from 25 May 2017.