In recent years George Orwell’s Nineteen Eighty-Four (first published in 1949) has twice been returned to bestseller lists around the world – in the wake of the United States National Security Agency’s global surveillance scandal, and following Donald Trump Counselor Kellyanne Conway’s decidedly Orwellian coinage of ‘alternative facts’ while defending the White House’s false claims about the size of the crowd at Trump’s inauguration.

Few other novels have colonised the public consciousness so widely. We turn to it to make sense of the seemingly senseless, combing its ingenious totalitarian vocabulary –Newspeak, thoughtcrime, doublethink, and all the rest – for clues as to how the English language has become so degraded, and how our politics have descended into sinister farce. (Orwell’s essential point, of course, was that the two are inextricably linked.) It seems, in some ways, a curious fate for a work of fiction so coloured by the circumstances in which it was written, so plainly the product of postwar Britain’s grim austerity. The novel’s topography, as Orwell biographer D.J. Taylor noted, is based on ‘the three or four square miles centered on Oxford Street and its immediate hinterlands’.

Yet there is a sense – and it is one that sits at the heart of this adaptation by British theatre-makers Robert Icke and Duncan Macmillan – in which Orwell’s protagonist Winston Smith is a man out of time, a permanent but changing reflection of whoever opens the book. Readers in the 1950s, depending on their political persuasion, read it as a critique of the Soviet Union or of fascism. In East Germany and North Korea – anywhere the book is banned – it must take on a searing, specific relevance to those wily or lucky or brave enough to procure a copy.

Icke and Macmillan build this mutability into their script, never precisely fixing Winston in time or space. Although faithful to both the spirit and narrative of the novel, it unfolds like a sort of fractured memory play, the reliability of Winston’s viewpoint and the authenticity of each moment constantly called into question. Somewhat perversely, the play’s point of departure is the book’s mysterious appendix, ‘The Principles of Newspeak’, which readers tend to skip over and the US publishers wanted Orwell to remove. It is from this appendix – anonymously written sometime after 2050 following the dissolution of the dystopian world described in the book – that the play’s framing scenes, in which Winston’s diary is the subject of a book group meeting, are drawn. In this way, Orwell’s worry about the erosion of belief in objective truth becomes the play’s guiding dramaturgical principle. ‘Where do you think you are?’ those around him repeatedly ask Winston, and we begin to wonder. Icke has said: ‘This could be the future that Winston imagines when he starts to write the diary. It could be us thinking about Orwell. Or it could be the people who write the appendix ... looking back at the primary text of Orwell’s novel or Winston’s diary.’ There is a kind of fatalism inherent in Winston’s journey in the play – reinforced by scenes that repeat with slight variations each time, like something in an inescapable nightmare – but there is also hope in the idea that we are responsible for, and complicit in, Winston’s ultimate fate. Is he to be remembered or forgotten? 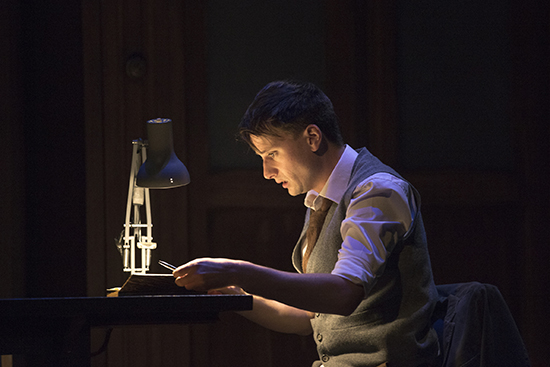 Part of the success of this production, however, lies in the fact that these metatextual conceits don’t prevent Icke, Macmillan, or Australian associate director Corey McMahon from capturing the visceral materiality of the book. Chloe Lamford’s wood-panelled, retro-futurist set is lushly detailed, easily conjuring up the musty establishment air of the BBC studios that were Orwell’s model for the interior of the Ministry of Information. Short of actually reproducing the vivid odours of the book – ‘boiled cabbage and old rag mats’ – the directors nevertheless locate their adaptation in the body through the use of sensory shock, namely repeated bursts of light and noise, often preceded by a high-frequency drone, that in their totality prove deeply unsettling.

If this adaptation has a signature mood, it is a pervasive unease. We never see Big Brother – Orwell’s Stalinesque ‘man of about forty-five, with a heavy black moustache’ – and the play is all the eerier for it. The scenes during which Winston and Julia meet in the room in Charrington’s antiques shop take place offstage, and are relayed to the audience via a live video feed. Icke and Macmillan don’t deploy the iconography of CCTV surveillance as merely an aesthetic layer. Chillingly, it is only when Winston is being obviously surveilled that he declares his sense of freedom and privacy. The flimsiness of this illusion – and it is, of course, our illusion too in a time of mass surveillance and data collection – is exposed in a stunning coup de théâtre that plummets the audience into the Ministry of Love’s white void, the mythical-sounding ‘place with no darkness’, where Winston is to be rehabilitated by the State. His protracted torture – fingertips slashed, teeth pulled out, electrocution almost to death – is as difficult to watch as anything I have seen on the stage.

This, I think, is partly the effect of the two fine performances that anchor this production. At first I thought Tom Conroy a little too young and handsome to convince as Orwell’s unheroic hero, described in the novel, not unlike Orwell himself at the time of its writing, as thirty-nine years old and physically unhealthy; but he tracks Winston’s journey from wide-eyed agitator to hollow-eyed conformist with a compelling, richly detailed blend of physicality and earnestness. Terence Crawford, meanwhile, is ideally cast as O’Brien, bloodless, clipped, and quietly commanding – more bureaucrat than despot. Ursula Mills does well enough with the material at hand – really, she’s too good an actor for a role as limited as Julia – and the rest of the cast are sound.

D.J. Taylor captured something crucial to the longevity of Nineteen Eighty-Four when he wrote of ‘the dreadful twinge of recognition that the novel habitually produces, the thought that this is not some alternative world hauled down out of the sky but a vivid projection of existing tendencies and states of mind’. There really is no comparison between Orwell’s organised dystopia and the chaotic travesty that is the government of Donald Trump (its occasional authoritarian flourishes notwithstanding). I am inclined sometimes to think we would be better off turning to Steve Bannon’s favourite books, or – god help us – the novels of Ayn Rand to bring the Trump era more clearly into focus. 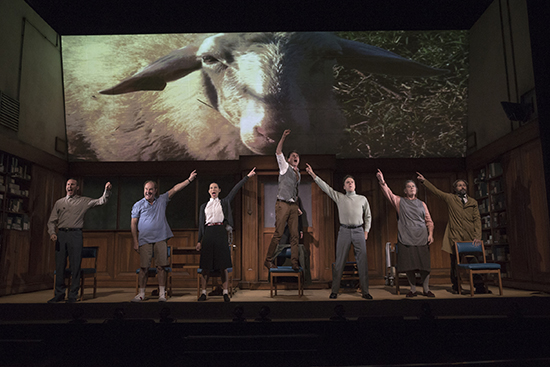 And yet how glad we are that it’s there whenever we need it, this cautionary tale for the ages. It is, I think, a spiritual thing as much as anything else – a candle in the dark. We need not belabour its prescience to hear what it has to tell us about the times we find ourselves in, when objective truth is under renewed assault from the political party Noam Chomsky has taken to referring to, not without cause, as the most dangerous organisation in human history. This production is a masterful distillation of Orwell’s unfading vision of a world in which the corruption of language and politics are not simply correlative but indivisible.