Co-Opera’s Eugene Onegin (★★★1/2) and Various People’s Orpheus Underground (★★★★★), both of which played in Adelaide in early May, provided a study in contrasts. Tchaikovsky’s great opera (first performed in 1879) has toured to the eastern states and country South Australia, an ambitious undertaking even with a relatively small chorus and orchestra. In Adelaide, the performances took place at the Thomas Edmonds Opera Studio, a pavilion at the Adelaide Showgrounds, which has the advantage, and disadvantage, of being basically a large empty space – highly adaptable, but lacking in both atmosphere and facilities such as an orchestra pit. The large audience, with BYO picnic suppers, sat at tables in rows at right angles to the stage, so that few people sat directly facing the performers.

Musically, the performance was exceptional. Everyone sang well: special mention might be made of Sara Lambert (Tatiana), Bronwyn Douglass (Olga), Michael Butchard (Lensky), and the magnificent bass of Eugene F. Raggio (Gremin). Tchaikovksy’s luscious orchestral scoring was superbly realised by the RCS Instrumental Ensemble. You can’t go past the Russian’s yearning cello melodies, played with real intensity by Joseph Freer. The chorus, though tiny – five singers, some of whom were also minor principals – made a rich sound. Under Brian Chatterton’s direction, there was not a false note (musically) in the whole performance.

The libretto was mainly in a graceless English translation, while some arias were blessedly sung in their original Russian, with surtitles. Vocally, the cast made the most of the drama of Tchaikovksy’s music, but there was little subtlety in the physical acting. Olga’s oppressively pervasive gaiety was signalled by a constant broad grin; Tatyana frowned continually so we knew she was a moody teenager.

Miranda Hampton’s production design was not always effective. The small multi-level stage was distractingly noisy underfoot and fussy as a performance space. By contrast, the uncluttered backdrop worked well, with hanging panels in folk-inspired fabrics against a black curtain. Onegin and Tatiana were elegantly dressed, but Lensky, for some reason, was clad in orange-and-yellow-striped trousers that no tragic hero should ever have to wear. Many other costumes were variously garish and unflattering. 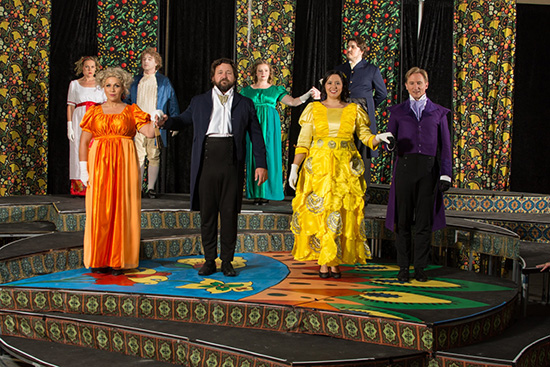 The cast of Co-Opera's Eugene Onegin (photograph by Paul Butler)

While Tessa Bremner’s production of Onegin was largely conventional in both concept and performance, Orpheus Underground was truly adventurous. The audience was led underground to Adelaide’s historic Treasury Tunnels by a woman in sumptuous Renaissance costume, to be invited into a small chamber and greeted with smiles and champagne. After small talk, with soft lute accompaniment, Orpheus was called on to speak, whereupon David Hidden (Orpheus) began singing ‘Nel pur ardor’ by Jacopo Peri (1600). Bethany Hill, as Eurydice, then joined him in a love duet from Monteverdi’s Orfeo (1607).

The audience was included with eye contact, or a friendly hand on the arm. There was no separate performance space: we were close enough to see the singers breathe. We were ushered from the wedding reception along the tunnels to the gates of Hell, and then, each paying our penny to Charon, played commandingly by David Cox, into the Underworld for the final heart-stopping scenes.

The performers slipped easily from spoken English to recitative, ensemble, and arias in Italian and German. No translations were needed. The small cast (five singers) more than acted –embodied – their parts as they moved with us through the tragedy of Orpheus and Eurydice as imagined through the centuries by composers – Monteverdi, Peri, Telemann, Pergolesi, Gluck –and poets – Rainer Maria Rilke and Carol Ann Duffy, whose poem ‘Eurydice’ was spoken to startling effect in dialogue between the three women. The final spine-tingling performance by Kate Louise Macfarlane of Vaughan Williams’ setting of ‘Orpheus with his Lute’ from Shakespeare’s Henry VIII drew the seventeenth and twentieth centuries together in a perfect blending of words and music. The only accompaniment throughout was provided on the arch-lute, a deep-toned instrument played beautifully by Melbourne-based Andrew Byrne. 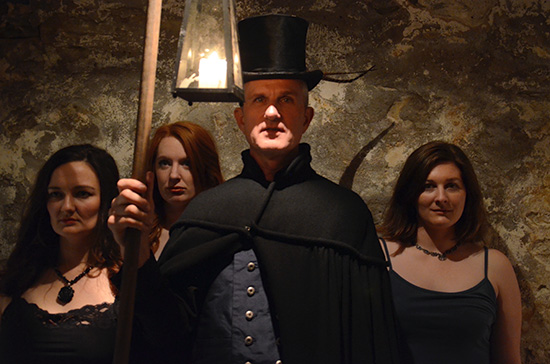 The venue design by Emma O’Neill was extremely simple, using the ambience of the tunnels themselves enhanced with lighting to create warmth, menace, or claustrophobia as required; and the costumes by Faith Gerhard were superb, of a piece with the atmosphere created by the music and the place.

Musically, these performances were both outstanding. In a concert we might sit with our eyes shut, but music theatre engages more than our ears. When Lensky sings his final aria, full of pathos and passion, the distraction of those ridiculous trousers is a heavy handicap for a performer to carry. Based on audience numbers alone, Co-Opera wins hands down, as thousands of people must have seen Onegin and fewer than 200 altogether could go to Orpheus. But as an experience engaging all the senses, body and mind, Orpheus as created and directed by Cheryl Pickering was immeasurably more intense and memorable.