The worlds of literature and video games appear at first glance to be distinctly at odds. Book lovers may feel that playing video games is puerile, a waste of time that could be better spent improving oneself by reading. Some gamers regard books as old hat, a stuffy waste of time that could be better spent enjoying oneself conquering digital guardians. But these worlds are merging more with each passing year. Computer and console technology is now so advanced that games resemble feature films. Graphics are lifelike, characters are motion-captured by actors, and soundtracks make the music charts (as was the case with Jessica Curry’s composition for 2015’s Everybody’s Gone to the Rapture, which was the best-selling classical album in the UK upon its release).

Little wonder, then, that game developers are making inroads into the territory previously inhabited solely by authors of literary fiction, by designing immersive narrative games that follow all the conventions of the novel. Games have always been, to a degree, playable stories, but the medium is now so awash with familiar tics that both designers and players alike are demanding a narrative maturity that has pushed video games to a new, highly literary level.

Horizon Zero Dawn (released in March 2017) has been hailed as one such beast, and rightly so. The story is a dystopian nightmare, wherein the player takes control of Aloy, a young woman who has been shunned from birth by her tribe, the Nora. Their garb is a mixture of animal hides, plastics, and scavenged objects, indicating that this is not our past, but the distant future. Relics of our world litter the landscape: ruined buildings covered in moss; buried compounds faintly lit by still functioning screens; and unpredictable robotic creatures that resemble horses, deer, and hawks.

Aloy is a sarcastic and courageous enigma, frustrated by the mystery of her origins. As she explores the richly rendered landscape of rainforest, desert, and icy tundra, the follies of the past (our present) are poignantly revealed. Society is now a matriarchy, where men are foot soldiers and stay-at-home parents. Women rule the detritus of civilisation, since the avarice and arrogance of men destroyed it a thousand years prior. 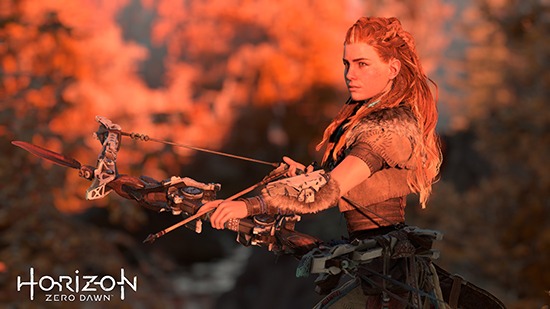 Horizon Zero Dawn is a triumph on all fronts. The narrative is compelling, the dialogue witty and natural, the reveals tinged with sadness. Stealth is emphasised over conflict, but when Aloy must fight against rival tribeswomen or enormous mechanical beasts, the player is put under terrifyingly realistic pressure. Were it the first in a series of Game of Thrones style novels, everyone would be reading it. As a game, it’s not doing too badly either, selling 2.6 million units worldwide within its first fortnight of release. These figures augur well for the future of narrative, irrespective of the delivery device.

The Walking Dead has consistently been one of the most watched television shows in the world since the pilot episode aired, in 2010. Following the travails of a group of survivors living in a hostile, post-viral America, where death leads to reanimation as a shuffling, ravenous zombie, the premise was hardly original. Based on a popular series of comic books, the show struck a chord with viewers, and has been praised for its grittiness and astute treatment of moral conundrums.

Now in its seventh season, the show is a victim of its longevity. The writing has nose-dived sharply of late. Plot points are belaboured, beloved characters have become irritating cyphers and the overarching narrative has lost direction. Loyal viewers are deserting the series in droves.

The producers might want to take note of the high standard of writing on show in the spinoff games, the latest chapter of which is A New Frontier (also released in March 2017). First released in 2012, these are episodic interactive graphic narratives, rather than true games. The player essentially watches a story, and is faced with conversational choices or scenario-based decisions that propel the narrative. The choices made influence the direction of the plot, much like the old Choose Your Own Adventure novels from the 1980s. The main difference is that The Walking Dead games are for adults, and a strong stomach is required.

A New Frontier is technically season three of the games series. Although it features a new family of survivors, led by former baseball player and problem gambler Javier Garcia, series protagonist Clementine makes a disturbing reappearance. The sense of desperation that is now absent from the television show is acutely present here. Javier, on the run with his sister-in-law, surly teenage nephew, and innocent niece, is staying just ahead of a horde of walkers. They scavenge for supplies, barely able to bed down for the night, lest the herd overtake them. 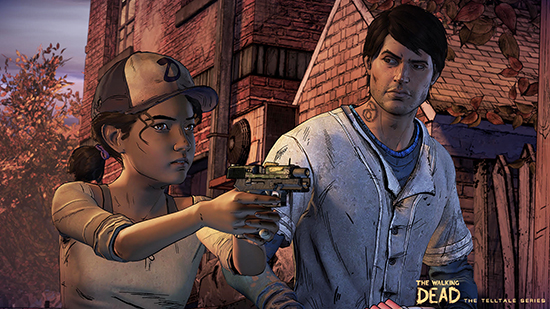 The characters of Clementine (voiced by Melissa Hutchison) and Javier (voiced by Jeff Schine) in The Walking Dead: A new frontier (Telltale Games)

The depravity of the living has always been the source of the television show’s most shocking moments, and that is given full throat here. Javier and his family shelter for the night in a junkyard, where they help themselves to a hidden store of supplies. This understandable action brings them into conflict with a group known as New Frontier, amoral survivalists who brand their members and show no mercy to strangers.

The killing of a child during the confrontation triggers a chain reaction of events that leads to torture, death, and the destruction of several survivor communities. It is precisely this sense of consequence and recrimination that has been lacking in the ponderous television show, whose thunder has been stolen by the morally complex writing in these thoughtful companion games.