Aboriginal and Torres Strait Islander readers should be aware that this commentary contains images or names of people who have since passed away.

You see them driving from Kings Canyon to Alice Springs, the majestic ghost white river gums depicted so faithfully in the paintings of Albert Namatjira. You would think you were looking at a Namatjira painting. And then there is the vista of the craggy hills of the West McDonnell Ranges in their mysterious blue hue – a signature feature of Namatjira’s art.

The ownership of Namatjira’s much-loved works of art has changed hands many times over the years and has generated millions of dollars in sales. No doubt copyright permissions have also followed – I say ‘no doubt’ because the actual course of the management of the copyright is unknown. It is owned by Legend Press, operated today by Philip Brackenreg, following the acquisition of the copyright from the Public Trustee of the Northern Territory by Legend Press in 1983 for $8,500. Over the years, there have been many instances of reproductions of Namatjira’s art in books, cards, calendars and on objects and garments, as well as auction catalogues – all copyright uses requiring permission and, presumably, payment.

A campaign is now underway to retrieve the copyright. Publicity surrounding the campaign has prompted John Flynn, the Public Trustee of the Northern Territory at the time, to comment recently in the media that the 1983 transaction was regrettable and made in error (he says he believed that he was transacting in the rights for seven years only).

It is possible that legal action could be brought to have the 1983 transaction declared a breach of trust. This would have significant implications for dealings in the copyright since 1983, which could include a claim for damages. It is hoped that the copyright can revert to interests representing the Namatjira family without the need for legal action, through a trust set up on their behalf by the social change organisation Big hART. 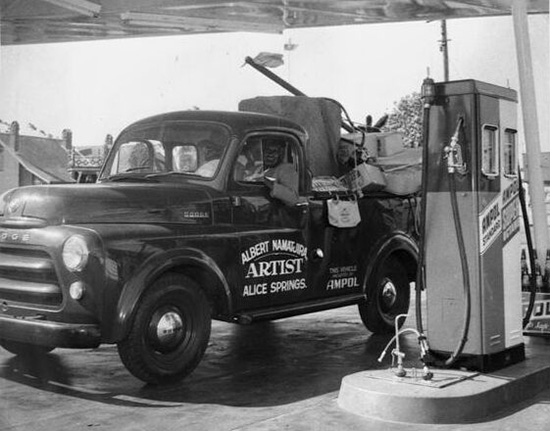 The events of the transfer of Namatjira’s copyright are remarkable. He was as famous in 1983 as he is today – nearly sixty years after his death – and remains among the most famous Aboriginal artists. The same treatment would never have been accorded to Sidney Nolan, Arthur Boyd, or any of Namatjira’s peer group of well-known Australian artists of the day. A regrettable transaction of this kind is unlikely to be repeated today, but redress for Namatjira’s descendants remains the issue.

If the copyright can be secured, a significant form of redress would lie in granting the Namatjira copyright special perpetual status. There is a precedent for this – the copyright of J.M. Barrie’s Peter Pan in the United Kingdom is owned perpetually by the Great Ormond Street Children’s Hospital in London due to a special act of parliament granting this status in 1988, the year after Barrie’s copyright lapsed. 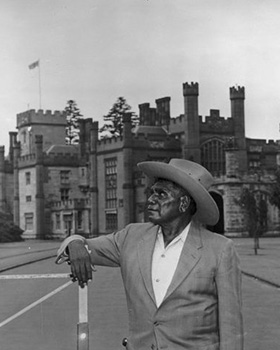 Albert Namatjira outside Government House in Sydney (National Library of Australia's Albert Namatjira photograph collection, Wikimedia Commons)There are a number of sound arguments for the grant of this status to the copyright of Namatjira for the charitable purpose of assisting the artistic endeavours of the Namatjira family and members of their community. First, the copyright has been lost to the family for nearly thirty-five years. Second, it would be a very significant national statement of regret and reconciliation, acknowledging the great contribution of Namatjira to Australia’s artistic legacy. Third, it would provide some means of redress in circumstances where Namatjira himself faced great prejudice and disadvantage in his life. Fourth, it would be an act of symbolic recognition of the importance and enormous contribution of the Aboriginal arts since Namatjira’s times to the visual arts culture of Australia (notwithstanding the circumstances of great adversity in which many Aboriginal artists have practised their craft, and still do today). In that sense, it may be seen as an act of reconciliation going beyond meeting the specific concerns of the Namatjira family.

For these reasons, 2019 (sixty years after the death of Albert) would be a fitting year to enact a perpetual copyright in the work of Albert Namatjira, to be administered by the Namatjira Legacy Trust. It would be a significant act of redress for the loss of copyright in 1983 and would be a highly symbolic gesture honouring the work of Namatjira and the Aboriginal arts generally.

Colin Golvan QC is Chair of ABR and a trustee of the Namatjira Legacy Trust (www.namatjiratrust.org). He was interviewed about this subject on the Awaye! program on Radio National on 4 March 2017.