Three women are staring into space. They are dazed, in shock, not yet believing that what has just happened has actually occurred. Beneath them is the body of a man, husband and father, whom they have just murdered. So begins the wild, darkly lyrical nightmare ride that is Australian playwright Angus Cerini’s The Bleeding Tree, which won several 2016 Helpmann Awards, including Best Play and Best Direction.

Much of Cerini’s earlier work has revolved around an anatomisation of a certain kind of white male ‘to see what breeds about [his] heart’, highlighting his anger, his propensity to violence, his sense of entitlement, and his limited concept of masculinity. Here, the white male has already been anatomised, as it were, and we are dealing with the consequences of his actions.

Since we are aware of the murder from the start, the play is not a whodunit, rather a where-to-put-it, as the three work out what to do with the body. Terror ensues when nosy neighbors drop by and cover-up stories have to be quickly invented, but gradually the three come to the realisation that the local response is not what they might have expected.

Cerini has described a theme of the play as ‘the scars that women wear’. We follow the man’s wife and two daughters as they move through a maze of emotions: release from oppression, fear of discovery, a gradual sense of their own power, and finally to a feeling of rebirth.

The play’s heightened language, which occasionally blossoms into rhyme, is at odds with the squalor of the women’s situation. But Cerini creates authentic poetry out of their limited vocabularies and frequent obscenities in a way that recalls Genet. I am not sure, however, if the mother would use the word ‘kharma’, though she would definitely understand the concept. The dialogue is shot through with the darkest of humour; one can be wincing and laughing at the same time. 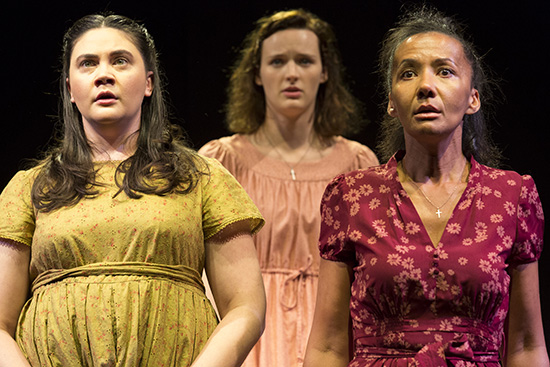 From dust we come and to dust we shall return is a concept that Cerini presents here with macabre delight. We are treated to gruesome descriptions of the rapidly festering corpse consumed by various predators. But he is also playing here with the concept of decay and rebirth and the fact that the remains of even the most despicable human being can be subsumed back into the natural order of things. At the end, the mother boils the remaining bones to use as fertiliser for a rose garden. The play’s final lines lead us out of the darkness:

You grow a new garden Ma?
I grow one for you.
What colours you after?
Any’ll do.
Any?
Yeah, any but his.
The colour of his gaping hole where all hell pokes through.
Just three days it takes to be rid of his spell.
Patience and good luck, some the universe sends.
The dead hole where his place was, makes its own amends.

Lee Lewis’s production is beautifully attuned to the play’s style. We are thankfully spared the sight of the body. The horror is left to the words. On Renée Mulder’s steeply raked, fragmented set, Paula Arundell, Airlie Dodds, and Shari Sebbens play not only the mother and daughters but also share the dialogue of the intrusive neighbours, so that we have a sense of a story not merely being re-enacted but of a fable told around a camp fire.

Dodds and Sebbens start from the same place emotionally. They combine delight and anxiety; at last they can tell their abusive father what they think of him, but there is a remnant of irrational fear, as when children use a naughty word and wait for a reprimand. As the play progresses, Sebbens forges ahead with no regrets, while the more tentative Dodds finds the corpse’s decay more confronting. Both are superb.

As the mother, Paula Arundell, who won a Helpmann Award for this performance when the play was first presented at the Griffin in 2015, is magnificent. She is all edgy determination as she attempts to hold it together, but we get glimpses of the abusive hell she has delivered herself from. The rage with which she rounds on one of the neighbours, one of the many who knew what she and her daughters were suffering through but did nothing about it, is devastating. 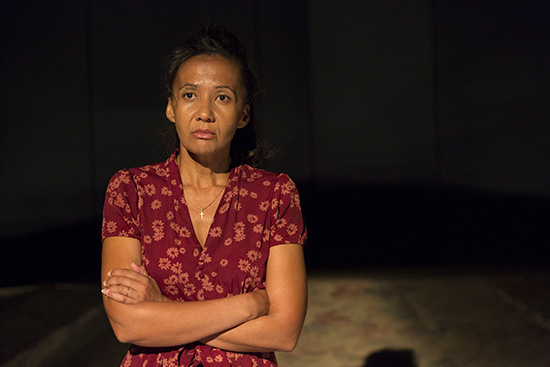 It is good to see a play of this quality getting a second showing. As Kip Williams points out in his introductory program note, STC and Griffin have a history of shared productions. Long may it continue.